I attended a test ride of Ducati's new generation adventure motorcycle, the Multistrada V4, in Japan and would like to report on it.

Introduced in 2010 with the "4 motorcycles in 1" concept that condensed the four categories of sport, urban, touring, and enduro into one motorcycle, the Multistrada has evolved to a new stage after 10 years. 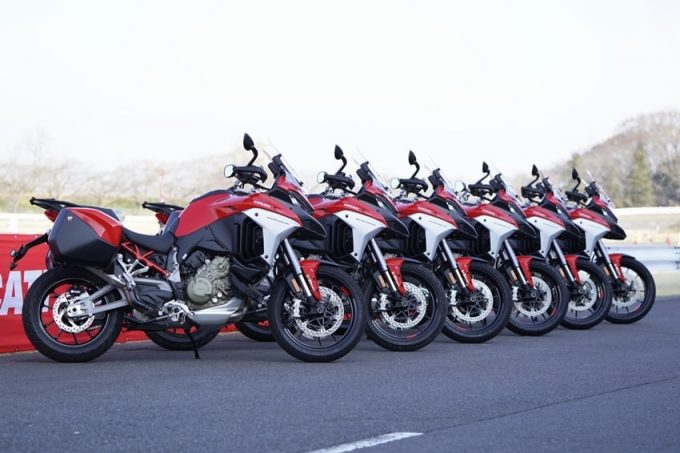 The key component is a newly developed liquid-cooled 90 degree V4 1158cc engine named the "V4 Gran Turismo". Although this is the same power unit as the Panigale V4, the displacement and output characteristics have been optimized for this exclusive design. The maximum output is 170ps, 12ps more than the current Multistrada 1260. Also noteworthy is the change from the traditional desmodromic to the more durable valve spring system, which allows for a maintenance cycle of 60,000km. 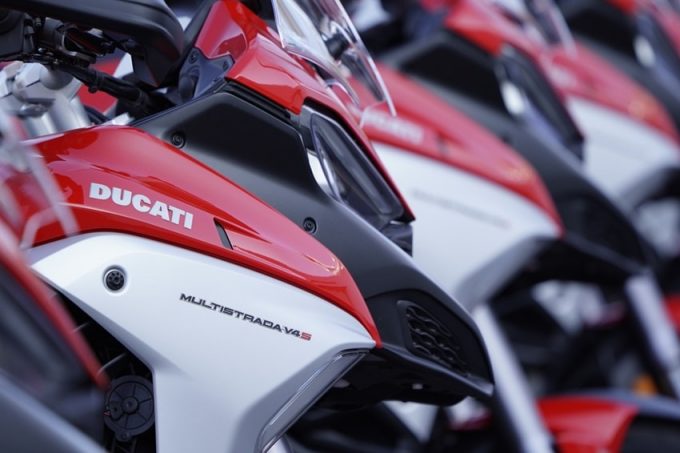 Another topic was the introduction of the world's first radar system for motorcycles. The system controls engine power and braking based on distance and speed data measured by radar mounted on the front and rear of the motorcycle. It has two functions. Adaptive Cruise Control (ACC) automatically tracks the vehicle in front at the speed set by the rider. The other is blind spot detection (BSD), which emits an indicator to inform the driver when it detects a vehicle entering the blind spot of the rearview mirror. The system is expected to support comfortable cruising on expressways and safe lane changing.

[Related News]
High Speed Riding Made Easy by Letting the Motorcycle Do the Work! The New Generation Cruise Control was a New Sensory Experience
Ducati Announces the Launch Date for the Multistrada V4 in Japan, the Most Advanced Multistrada Ever

Smooth and stable even at very low speeds, with good foot grounding. 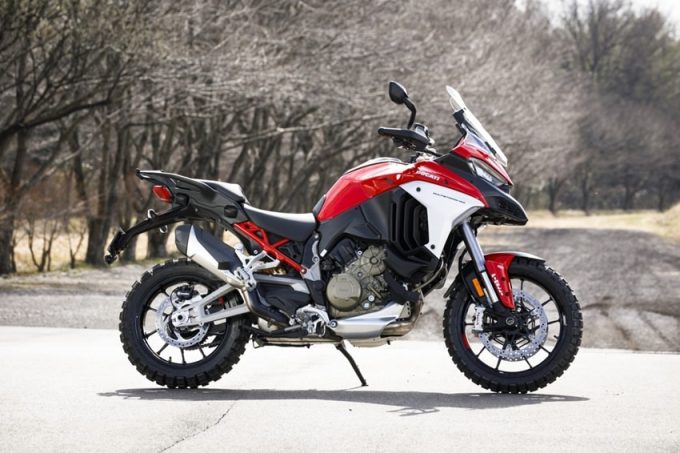 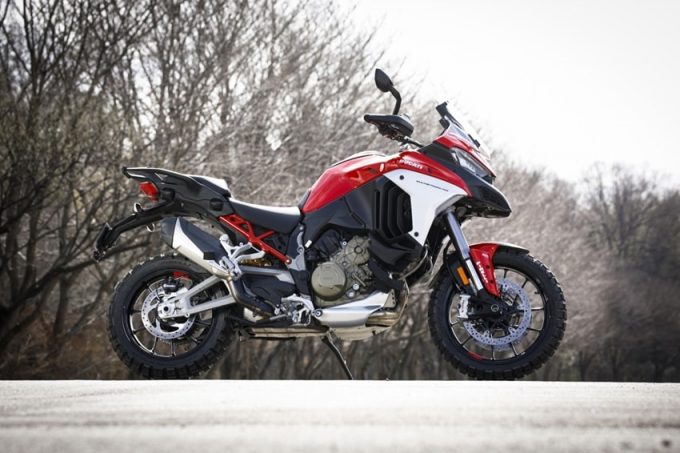 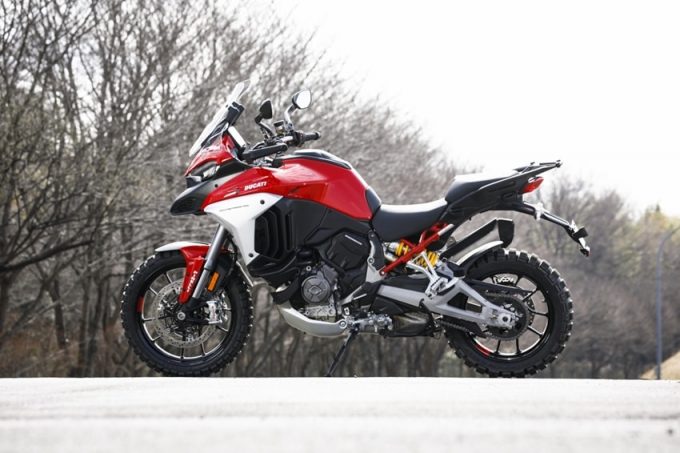 The silhouette is instantly recognizable as a Multistrada, but once you get up close, you realize that this is a very different machine. The new daytime running lights (DRLs) on the front mask resemble the Panigale V4 face, and the compact V4 engine is symmetrical to the 22-liter tank, giving it more distance from the ground.
It is shorter at the front and rear, giving the impression of having more legroom. The cast aluminum monocoque replaces the steel trellis frame, while the subframe is a sturdy trellis structure that can withstand off-road driving. Finally, the front wheel was changed to 19 inches, and the swingarm was strengthened to a double-sided type, making it a complete change from the engine to the body.

With the stand-off and the engine performing, the V4's finely tuned heartbeat and high-pitched sound are different from the L-Twin's, and while the L-Twin's rumbling heartbeat is a delight, the V4's revs are more precise and smooth. The V4 engine is so tenacious that even at walking speed, I didn't even have to use the half-crack.
There is plenty of steering angle, and the smooth rotation with little torque fluctuation makes it stable even at very low speeds. The ride position is the same as the 1260, but the seat has been flattened to allow more freedom in the seating position. Japanese specification seat height (820mm)/(840mm) is low for an adventure model, and the footing is quite good. 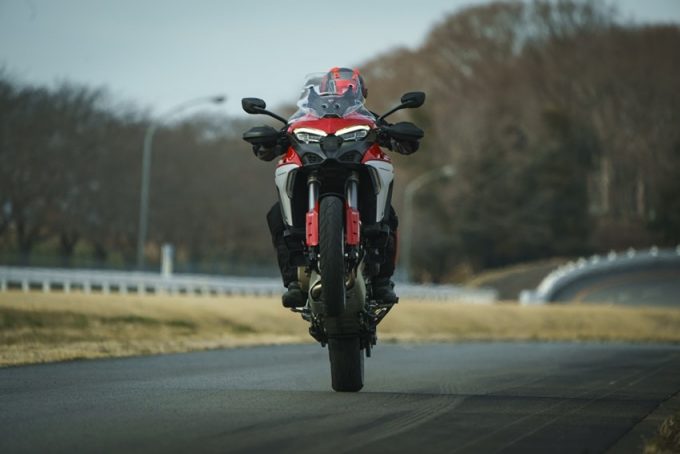 On the winding course, we changed the riding mode to "Sport" and gave it a try. The engine's instantaneous power is increased, the exhaust sound is wilder, and the electronically controlled suspension and the degree of intervention of the Traction Control and ABS are all set to a more sporting setting. 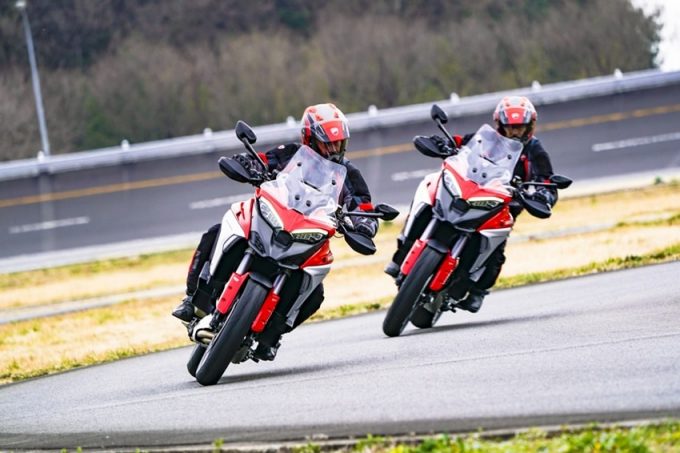 The 170 hp V4 engine is the most powerful in Multistrada history, but once you get going, it's so easy and gentle to handle that it's a bit of a letdown. At full throttle, of course, the engine delivers the kind of acceleration you'd expect from a superbike, but at 5,000 rpm, less than halfway to the red zone, it's more than enough for everyday use.

The handling is straightforward and precise, and the 19 inches provide a sense of ground contact and stability while allowing you to follow the line you want. There's no mass in the engine area when turning left or right, which is a very different feeling from an L-twin. 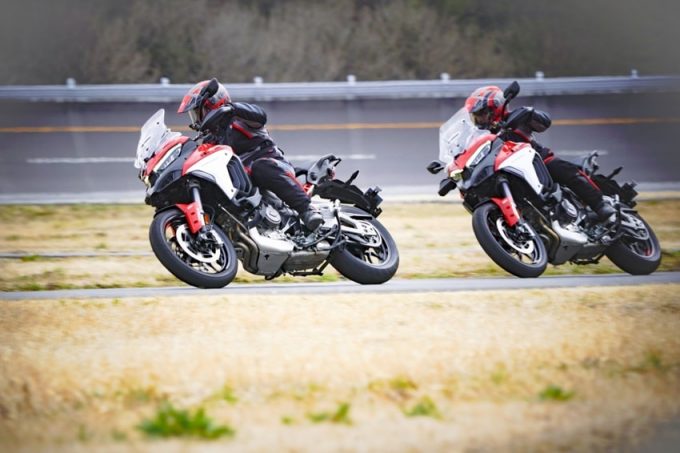 The hint was actually in the dimensions of the motorcycle. Compared to the previous model, the V4 engine is much lighter and more compact (9cm smaller front to back and top to bottom, 2cm wider, and 1.2kg less in weight).

The engine is mounted at the front and the caster angle is set up to increase the front load despite the large 19-inch diameter. In addition, the swingarm was lengthened and the wheelbase was trimmed in a supersport-like manner to bring out the athletic performance. The answer to the question of why a V4 engine is used can be seen clearly.

The brakes are also excellent, allowing you to control your speed with a delicate touch even as you bank into corners, while the state-of-the-art ABS stops you in the shortest possible time when you need to brake hard to avoid danger, even when you're close to the limit of the tyres' grip. Improved safety features such as a mechanism that holds braking power when starting up a hill and an emergency stop lamp that helps prevent rear-end collisions are also benefits that should not be overlooked. 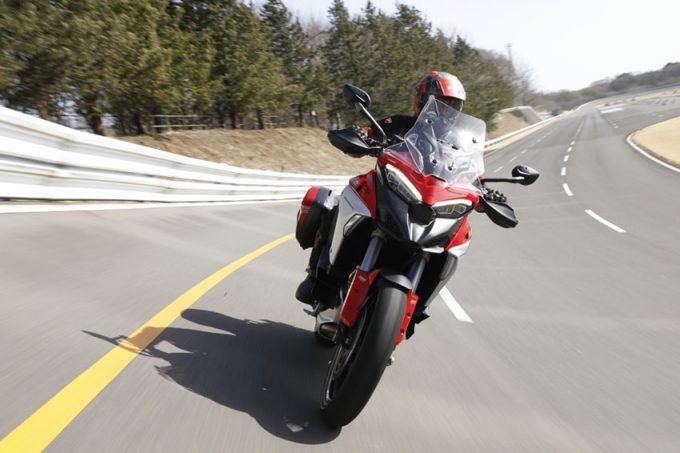 The aerodynamics of the V4 are also impressive at high speed, and the motorcycle quickly reaches Autobahn-like speeds with a jet-like high-revving sound. Even in that range, the main screen and the sub-screens on either side are so effective that it feels as if you're encased in a capsule that blocks the wind pressure. In addition to the 19-inch wheels, the new front wing should also have a stabilizing effect. We tested it on a vehicle with pannier cases, and the stay swings from side to side to help keep the line stable in crosswinds. The clip heaters and seat heaters (also available for tandems) worked like a charm.

Enduro machine at the flick of a switch 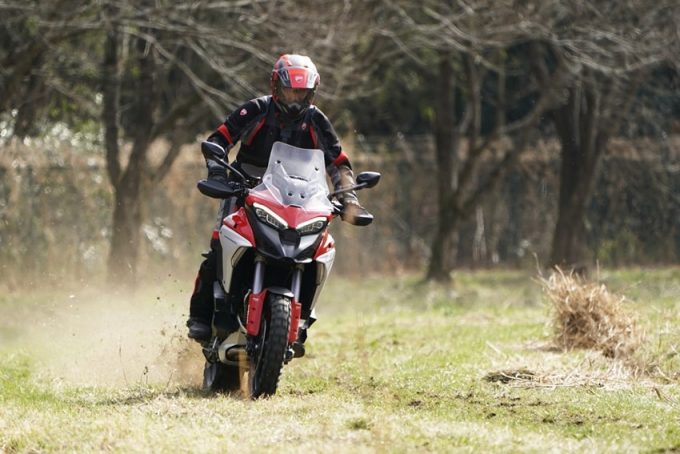 The new V4 especially emphasizes the improvement of off-road performance. Here, we switched the mode to "Enduro", and the output characteristics became milder, the ABS was deactivated in the rear, and the degree of intervention of the Traction Control was optimized to handle moderate sliding. The electric suspension also instantly changes to a direction that emphasizes driving performance by applying preload and stroking with the flick of a switch. 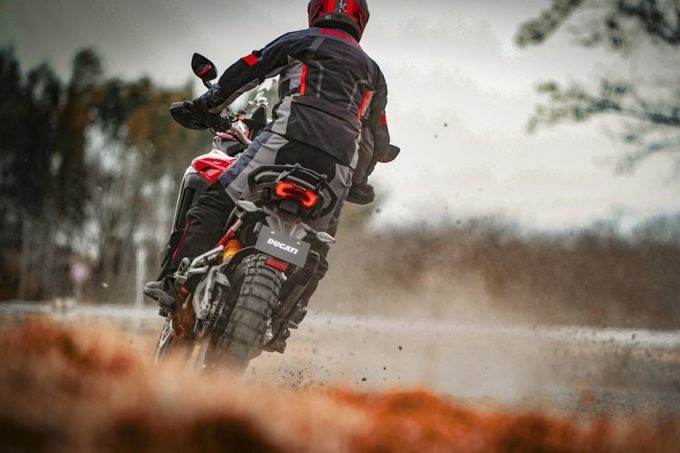 The first thing I felt on the dirt section was the ground contact and stability of the front 19 inches. In addition, the V4 engine is positioned closer to the front for a lower center of gravity, which gives the motorcycle a more secure front grip. The extended swingarm is also worth noting.

The swingarm pivot is set midway between the front and rear axles, giving it the length of an enduro model. The V4's balanced center of gravity and excellent traction in the dirt, combined with the long legs and long swingarm, results in a motorcycle that handles much better in the dirt. 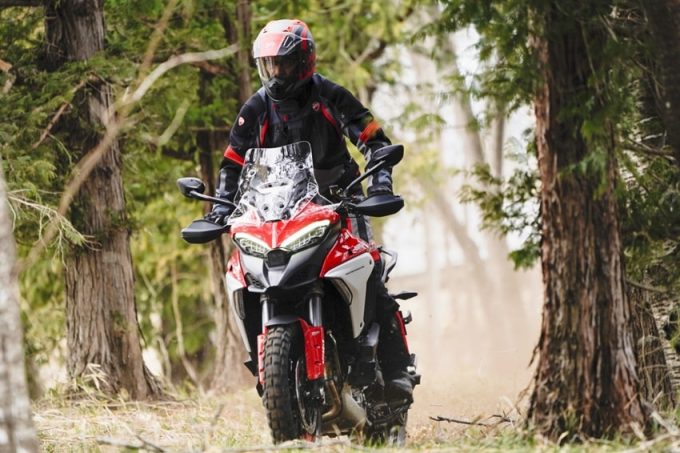 In fact, it's so easy to turn the machine around with the throttle open and a light tailslide on the Traction Control. Furthermore, with the greatly increased road clearance and matured electric skyhooks, it can even do a little hill climbing and jumping on the bank.

In the past, when it was 17 inches, it was "you could drive off-road if you wanted to," but with the new V4, it is now "you can actively enjoy off-road". 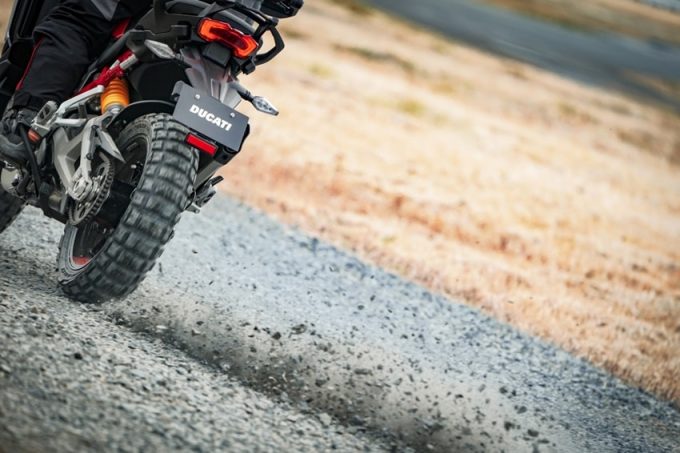 This was the ideal "4 motorcycles in 1" that Multistrada had always wanted, and the V4 was the best choice to make it a reality.

Radar system to ensure a safe and comfortable journey

I'd also like to mention the radar system, which is the highlight of the show. This system is already in widespread use on modern four-wheelers, and those with experience will immediately appreciate its convenience. 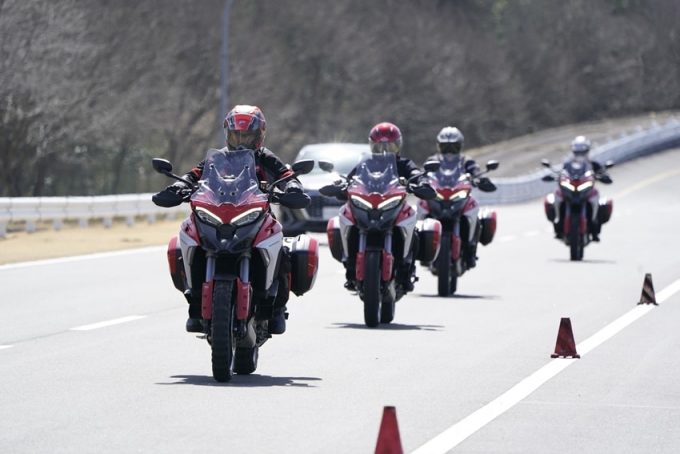 Whether the vehicle in front of you is a car or a motorcycle, ACC instantly detects it and automatically maintains the optimum distance between you and the vehicle in pursuit. We tested the ACC system with four motorcycles in a row in front of and behind us, and it was able to cope well with the gradual changes in speed that are expected on an expressway.

In addition, the BSD system reliably detected cars and motorcycles in blind spots that were not visible in the rearview mirror, and it also reacted quickly to alert the rider to the following vehicle that was passing at a certain speed difference. The more difficult the conditions are, such as bad weather, nighttime, or when you are tired after a long ride, the more you will realize the benefits and appreciate it.

It is not a machine that is easy for anyone to acquire, but as a true multi-purpose adventure machine that does not shame its name, which stands for "all roads," I think it is well worth the effort.

[YZF-R6 Review] The ultimate in attractive bike "Let’s talk about my bike, Webike users!"178 views
Introducing the 19 SPORTS CONCEPT of the ADV150!172 views
The NEW Pirelli's High-grip Supercorsa V3 Tire! Used in the race track!105 views
Learn the Signs of Scooter Belt Wear Out and How to Replace it98 views
How to Adjust the Ignition Timing of an Old 2-stroke Engine with the Height of the Piston?91 views

[YZF-R6 Review] The ultimate in attractive bike "Let’s talk about my bike, Webike users!"1093 views
Introducing the 19 SPORTS CONCEPT of the ADV150!807 views
The NEW Pirelli's High-grip Supercorsa V3 Tire! Used in the race track!431 views
Learn the Signs of Scooter Belt Wear Out and How to Replace it380 views
GPX GENTLEMAN 200 Test Ride Review: A Neo-Classic Model the Same Style as a Big Bike!375 views