Delivery in Japan starts in July

In particular, the high-end Pan America 1250 Special comes standard with electronically controlled semi-active suspension front and rear, with a function that automatically adjusts damping force to suit the road surface and driving conditions. The company says the new model maintains a comfortable on-road ride while delivering excellent off-road performance. The most notable feature is the Adaptive Ride Height (ARH), which automatically adjusts the height of the seat as standard equipment. This provides both stability while driving and a comfortable footing when stopped.

The word "Pan America" is derived from the idea that the states of the U.S. should work together to create a system of cooperation in politics, economics and diplomacy. In other words, "Pan America 1250" is a name that expresses the strong will of the United States to challenge the adventure segment with all its might.

This is eloquently demonstrated by the many cutting-edge technologies that have been incorporated into the motorcycle. First of all, the engine is not the traditional air-cooled big twin, but a completely newly designed liquid-cooled V-twin DOHC 4-valve 1250cc engine with a completely new modern layout. The engine is also equipped with variable valve timing (VVT) that extends the power band throughout the entire range, resulting in a maximum output of 150ps at 9,000rpm and a maximum torque of 128Nm at 6,750rpm, specs that are second to none even among rivals in the same class).

It is rare for Harley to disclose the maximum output value, which shows how confident they are. The chassis is also lightweight and compact with a split steel frame that fully utilizes the engine as a rigid member.

Automatically lowers the vehicle height when stopped to support footing

The most notable feature is the Adaptive Ride Height (ARH), a first for a mass-produced production motorcycle. The system is based on a semi-active suspension from SHOWA, but with Harley's own unique control system that keeps the ride height at an optimal level while riding, and lowers it by about 2 inches (5 cm) when the motorcycle is stopped to support footing. 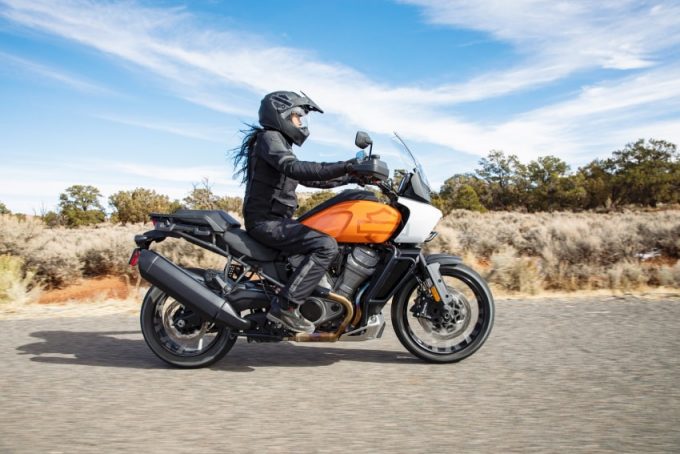 In fact, at the end of last year, I had a chance to try out a similar system at the SHOWA test course, and I remember being amazed at the smooth operation and dramatic improvement in footing. We now have a dream tool that can solve the fate of adventure models, which are prone to poor foot grounding in contrast to their excellent riding performance.

Of course, it also has the basic functions of a semi-active suspension that automatically adjusts preload and damping according to driving conditions, and has five pre-installed suspension settings optimized for the five driving modes (Sport, Road, Rain, Offroad, and Offroad+).

It's got all the latest devices and all the safety features.

It also incorporates the RDRS Safety Enhancements, an advanced safety technology that Harley has been aggressively introducing in recent years. These include front and rear ABS braking and traction control for cornering, slip control for excessive deceleration torque, and a hill hold function to assist hill starts.

In addition, there is a 6.8-inch TFT display with touch panel operation, infotainment with Bluetooth for phone calls, music and navigation, and adaptive headlights.

Harley's first full-fledged adventure tourer, the Pan America 1250, is said to be a "two-wheeled multi-tool". We hope it lives up to this concept and look forward to a test ride.