The full scope of the KAWASAKI Ninja ZX-25R has finally been revealed, which has garnered a great deal of attention since its electrifying announcement at Tokyo Motor Show 2019 last year. This is the first new debut for the first time in 30 years as a 250cc class 4-cylinder super sports motorcycle.

Why is it a multi-quarter now? I would like to explore the true meaning of this with a recently held developer's interview for the media. 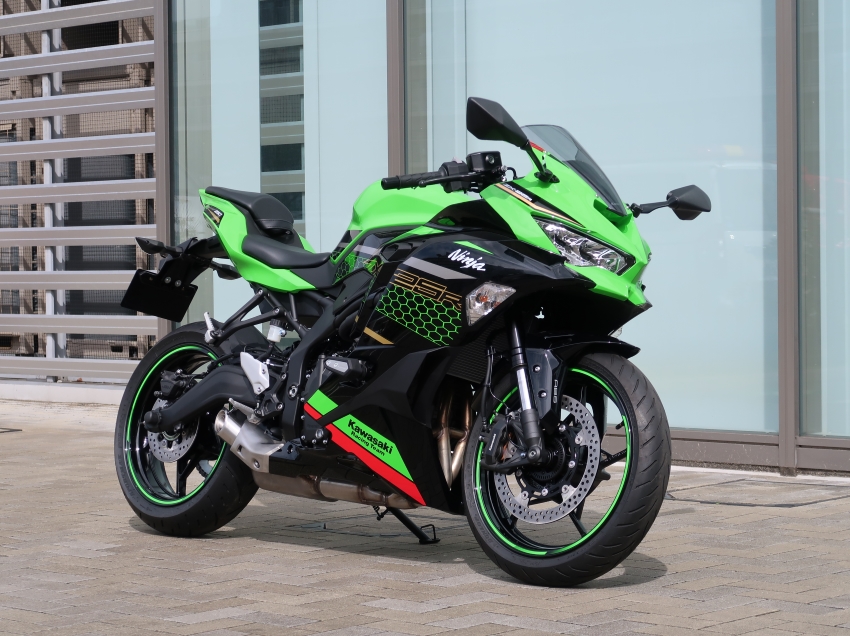 Let's take a quick look at the appearance of the new ZX-25R. The racer replica craze of the ’80s started with the 2-stroke model, and by the late ’80s it had shifted to the 4-stroke model. In the 250cc class, while each manufacturer introduced the latest technology of the time, KAWASAKI develops a 4-cylinder machine, which was the last released in 1989, the ZXR250 with full satisfaction. At the time, the manufacturer's self-regulatory limit of 45ps/15500rpm was achieved. New modern-day technologies such as inverted front forks and a ram-air system were used to make a production racing machine. The 4-straight units, such as the high-rotation high output in the picture, were then handed over to the naked model BALIUS.

Time flew by in 2008. KAWASAKI released the Ninja250R, which pioneered a new wave of 250cc supersport motorcycle, and it was a big hit mainly for young riders. After that, it is well known that each manufacturer has continued to the present. KAWASAKI has been at the forefront of the 250 sportbike market, upgrading the Ninja250 series, but in its main market of Southeast Asia, the demand for even higher performance has grown.

Combining performance and ease of handling to overwhelm rivals

Mr. Yamamoto, the development leader, said. "In Southeast Asia, the Ninja250 has established itself as a luxury sports motorcycle. However, the 250cc sports market is maturing in recent years, and riders have been asking for further improvement in the performance of the Ninja250.
In addition, as a development team, we also had a strong desire to bring back the heart-stopping high-rotation power, sound, and high-quality rotational feel of the former 4-cylinder machine to the present age." 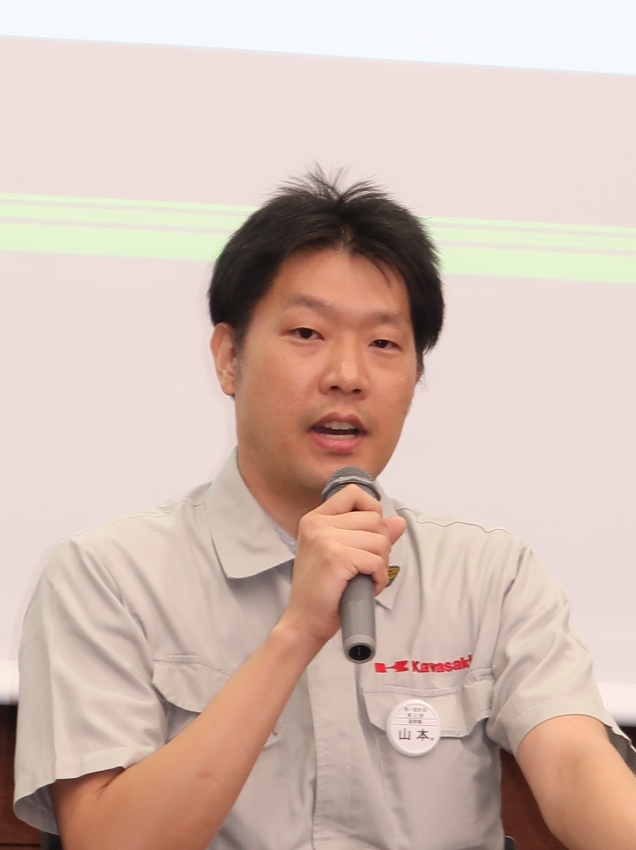 The model I aimed for was a model that goes up a notch. Then, it was 4-cylinders considering the division between the 2-cylinder Ninja. In terms of engine performance, the focus was on power performance that overwhelmed rivals and ease of handling in the everyday range. In other words, KAWASAKI aimed to "take the best of ZXR250 and BALIUS".

The new "ZX-25R" has a max output of 45ps/15,500rpm. It comes with a bonus of 46ps, which is an additional 1ps due to ram pressure supercharging. Numerically strange, it is at the same level as the former ZXR250, but its meaning is different in today's strict regulations.

In other terms, it is difficult to achieve both peak power in the high-rotation range and rich low- to-medium-speed range with a small displacement engine. At the research stage, there are some parts that referred to the specifications of the ZXR250, but the contents are completely new designs.

Specifically, the engine bore has been expanded by 1 mm and the stroke has been shortened. The large diameter of the valve and the angle of the intake port are made to reduce the intake loss and improve the combustion efficiency by increasing the machining accuracy of the exhaust port.

Also, the low and medium speed range is solved by optimizing the exhaust pipe connection method and camshaft timing. Certainly, the latest technology of the ZX10R has been polished in the highest race scene such as WSB is also introduced.

Steel pipe trellis frame that conveys the limit with "bend"

Mr. Shandong, who is in charge of the motorcycle body design, aimed at "light handling that allows the rider to enjoy circuit-riding while ensuring a stable sense of security even in the high-speed range. And yet, it should not sacrifice comfort and ease of handling for city riding". Having owned the BALUIS in the past, "I wanted to make the motorcycle I wanted to ride". 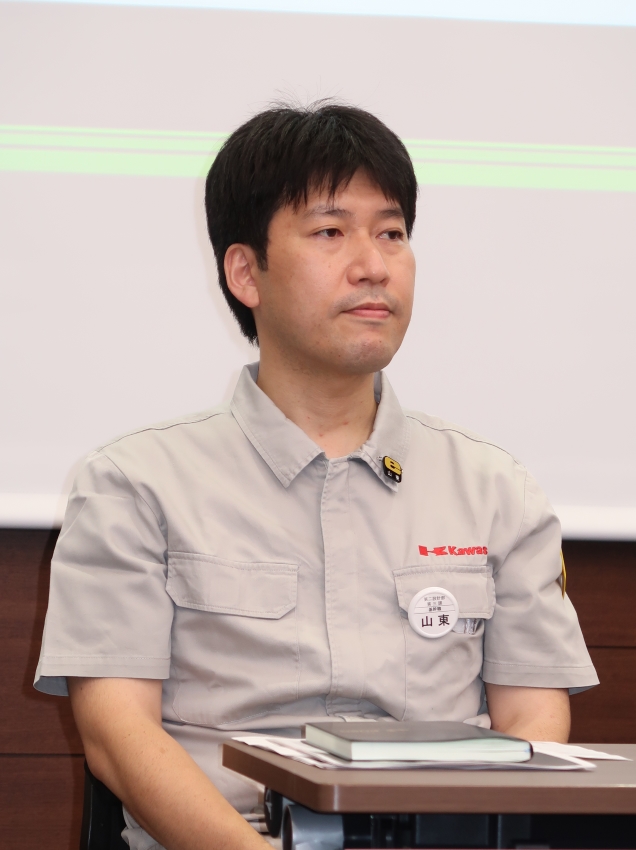 The reason why a steel pipe trellis type is adopted for the frame, which is the key to handling, is that it is intended for a wide range of applications. The advantage is that it is easy to tell the rider the condition of the road surface or machine by "warping". The aluminum twin-spar frame, including the ZXR250, was the mainstream of the former racer replica, but while aluminum is excellent in high-speed stability, there is also a negative factor that excessively feeds back to high frequencies, such as it may lead to a sense of discomfort.

Therefore, it was judged that it is possible to use the appearance of the trellis structure that is also adopted in H2 effectively. The swingarm has also adopted steel with the same idea. Besides, the inline 4-cylinder tends to have a large motorcycle width, but to suppress it as much as possible, the steel pipe type, which has a high degree of freedom in design, is said to be more advantageous.

A different dimension of handling from 2-Cylinder models 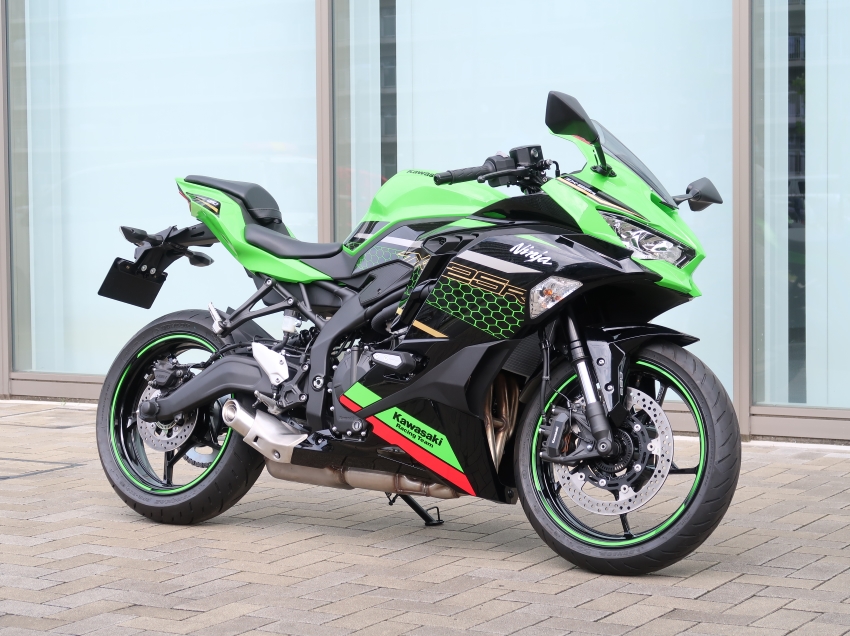 "Dimensionally, it sets the center of gravity position higher than the roll axis compared to the Ninja250, and the load distribution of the front and rear is also closer to the front. The transition to the primary rotation was set to a dimension that is easy to turn fast and with a sense of speed", Mr. Shandong said.

On the other hand, to ensure high-speed stability, the manufacturer made full use of the latest analysis technology and the knowledge KAWASAKI has been cultivated, such as lengthening the swingarm and wheelbase and eventually adjusting it with the amount of trail, bringing it closer to the concept of "performance of a dimension different from the existing 2-cylinder team" that was set forth from the beginning of development.

High limits but fun for the average rider

All I could think of was that I wanted to make it a good motorcycle. When I got on the test motorcycle for the first time, the engine was already very good, so I had to finish the motorcycle body. From that point on, I was even more enthusiastic about it," says Mr. Nozaki, the development rider. 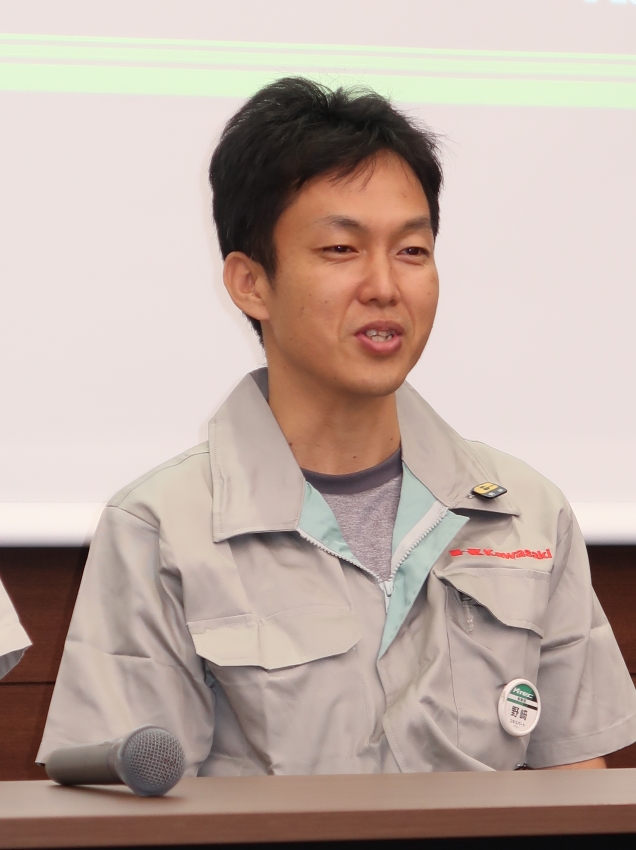 The steel pipe trellis frame is "easy to understand feedback near the limit," Mr. Nozaki said, who was in charge of the actual handling. For example, 10R of the high-rigidity aluminum frame is excellent in the feedback in the high load area, such as racing, it becomes an area that can not be in the public road. In contrast, the "ZX-25R" has the characteristics that ordinary riders can easily feel on public roads and circuits. In other words, the motorcycle behavior in the critical range when it is attacked is finished in a motorcycle that is easy to understand.

I was particular about the traction control and the shifter

The KTRC (Kawasaki Traction Control), which is adjustable for the first time in the 250cc class in 3 levels, I ride down rainy public roads and circuits so that riders of a wide range of levels and styles could use them to boil down characteristics and feelings, resulting the performance of the standard equipped quick shifter that supports up and down has been finished to a satisfactory level. Other features such as radial mount calipers and a "thin, weight-dispersive seat" that is designed to absorb the power of the vehicle and prevent fatigue were evident in the new ZX-25R's design. 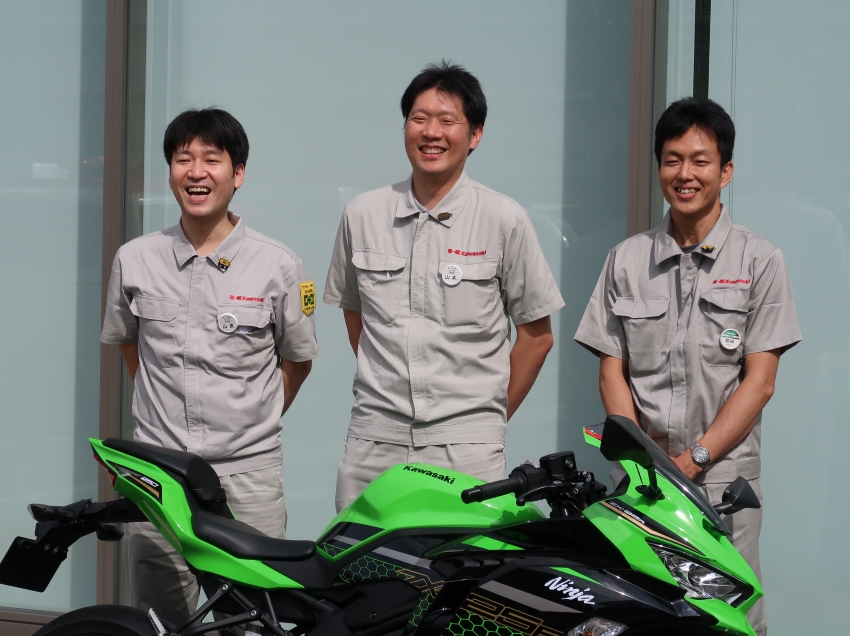 At this moment, by directly listening to the comment of the developer, my expectations for the new "ZX-25R" expanded further. I think I will be able to deliver a test ride reviews in the near future, so please look forward to that as well.