It can't be unloaded anymore. Yes, with HENLY BEGINS.

Like supersports, street fighters, and more recently 250cc sport motorcycle, they all have small pillion seats! It's stylish and cool motorcycles, but it's not always easy to load when you go touring.

When I was riding the CBR600RRR, it was not stable because of the small pillion seat, so I had a terrible feeling that the luggage came to the right, or left, or came down to the front with the braking. When this happens, I would fall into a state of distrust of the load, and I would have to check my luggage at every stoplight, which would make me difficult to do touring.

When this happens, I would fall into a state of distrust of the load, and I would have to check my luggage at every stoplight, which would make me difficult to do touring.

But such anxiety is already a thing of the past! The PRO series of seat bags released by HENLY BEGINS is a seat bag for all the riders who have ever been plagued by small pillion seats!

The most distinctive feature of the seat bag PRO is the red tape-shaped parts. Plug the rear end of the pillion seat into this tape to help fix the compact seat bag!

If you have this, you can no longer have that unpleasant incident that the seat bag already slides forward. Adios!! It's simple, but it's a really innovative feature.

I've tested a number of seat bags, but I don't think there's ever been a seat bag with this kind of ingenuity, as far as I know.

Secret No. 2: The non-slip seat 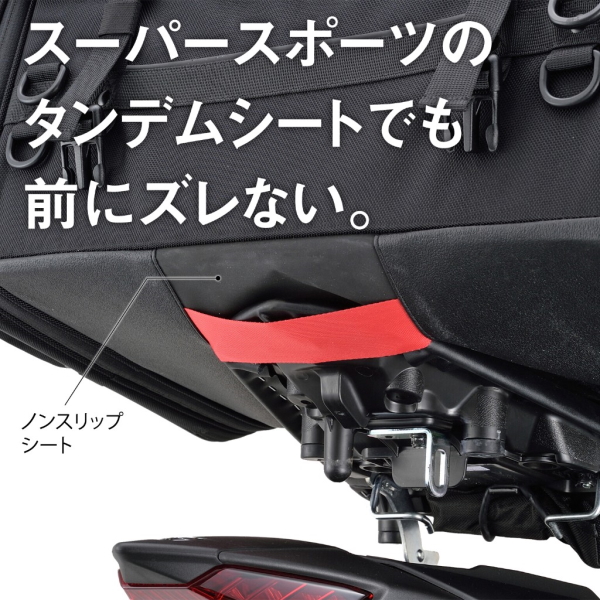 This seat bag has a special non-slip seat in the center. Non-slip means, as the name implies, non-slip. Until now, this was not available, so some riders may have had to get a separate non-slip seat. But now it's standard equipment!

The combination of the red tape and the non-slip bottom surface makes it possible to create a seat bag that does not slip or fall even with small sheets.

This non-slip seat is a great advantage, even on a motorcycle with a large seat that can't fit in the red tape.

The seat bag PRO has now a familiar variable capacity system. This is a convenient function that allows you to store your souvenirs on the go so that you can store them in your bag by increasing the storage capacity even if you have more luggage. However, there is also a disadvantage, conventional products on the structure in the extended part, there is a drawback that it will hang down because there is no bottom plate.

When it hangs down, your luggage can get close to it, and if your motorcycle has an upright exhaust, it will come in contact with the exhaust and be uncool.

In this seat bag PRO is to solve the problem, a reinforcing plate is attached to the side! By setting this reinforcing plate on the bottom of the body at the time of capacity expansion, it will suppress the hanging of luggage!

*The reinforcing plate is a function for M/L/LL/LL sizes only.

Moreover, the presence of this belt keeps the walls of the bag connected to each other, making it difficult to lose shape. Originally, the seat bag of HENLY BEGINS is a shape that is hard to lose its shape, so it is a metal rod to the demon. It may be said that the seat bag which does not transform into clunky was a long-cherished wish for those touring rider in a sense. 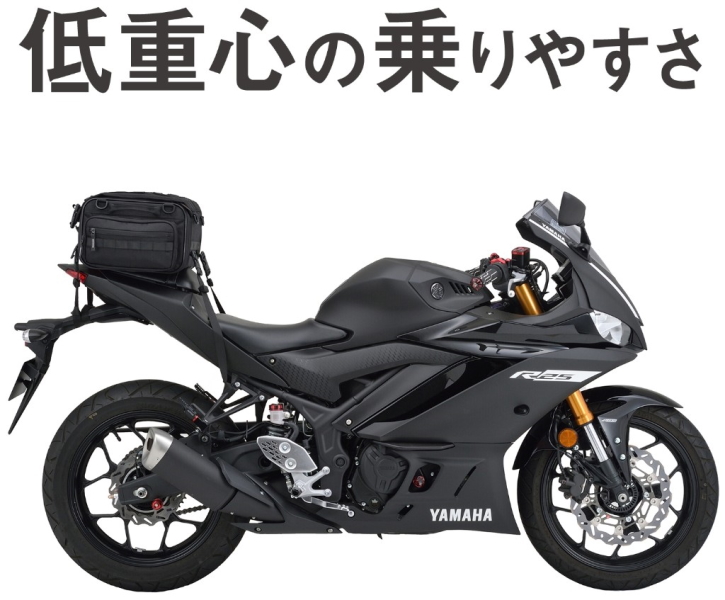 As a result of considering maneuverability, ease of riding, and balance with the motorcycle body, the height is set to 30cm or less and the depth is 32cm or less throughout the series. Since the height is suppressed, you can enjoy touring more comfortably without impairing mobility even if you load a lot of luggage.

In addition, with modern motorcycles with a high tail cowl, the load can get in the way when you ride, and in the worst-case scenario, a rider kick and knocking the bike over can be a sad accident. This is a low center of gravity design to avoid such accidents. It's all about mass centralization in loading.

Four different sizes! From a day trip to camping 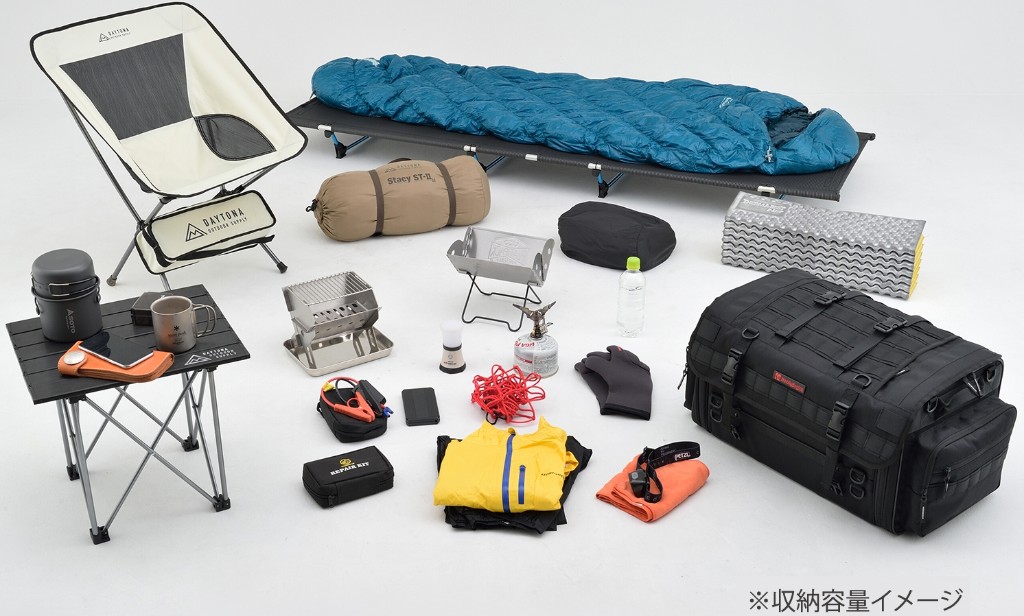 There are 4 sizes available in the lineup, from the S size, which can be used in multiple ways for day trips and overnight stays, to the LL size, which boasts a maximum of 70 liters and has plenty of room for camping touring. 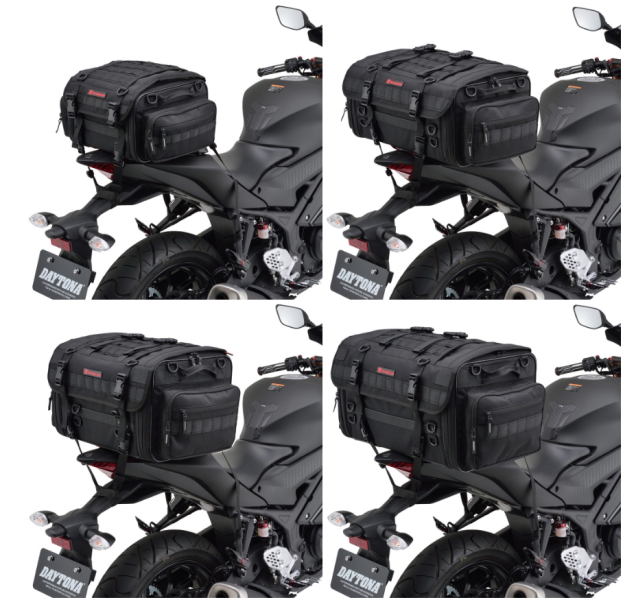 Certainly, it also comes with familiar useful functions such as the ability to access luggage from the side familiar in the previous seat bag series, a wide opening, and a very convenient PALS tape depending on how to use it. 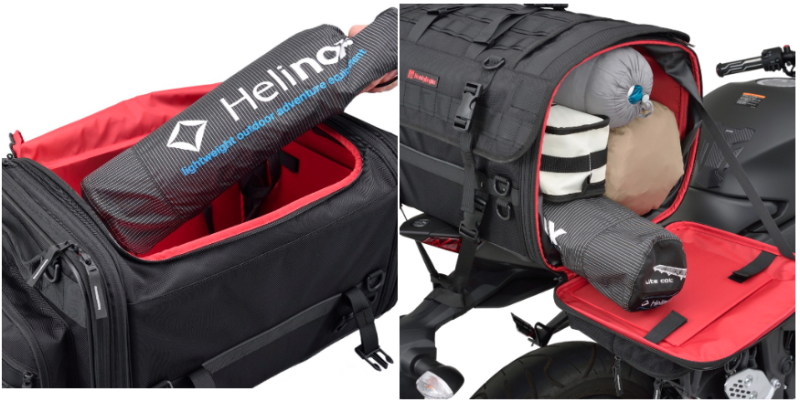 I'm surprised that it has evolved to think about the riders who actually using this seat bag. One by one, you could say it's a steady evolution, but all of those things combined make this seat bag easier to use than you could ever imagine! It is a recommended item that I want to align from now in preparation for the long touring of summer.