Home
Webike Original
How to
DIY! How to Remove Rotten Fuel in the Carburetor by Chemicals!

When you say you've got a motorcycle that has been vacant for many years since the last ride or has been left behind for a long time, you need to take care of the fuel left in the carburetor. All the passages inside the carburetor are fine, and if you get stuck at any one place, you will feel unwell.
If you find dirt or clogging, it is safe to clean with a strong and reliable chemical. 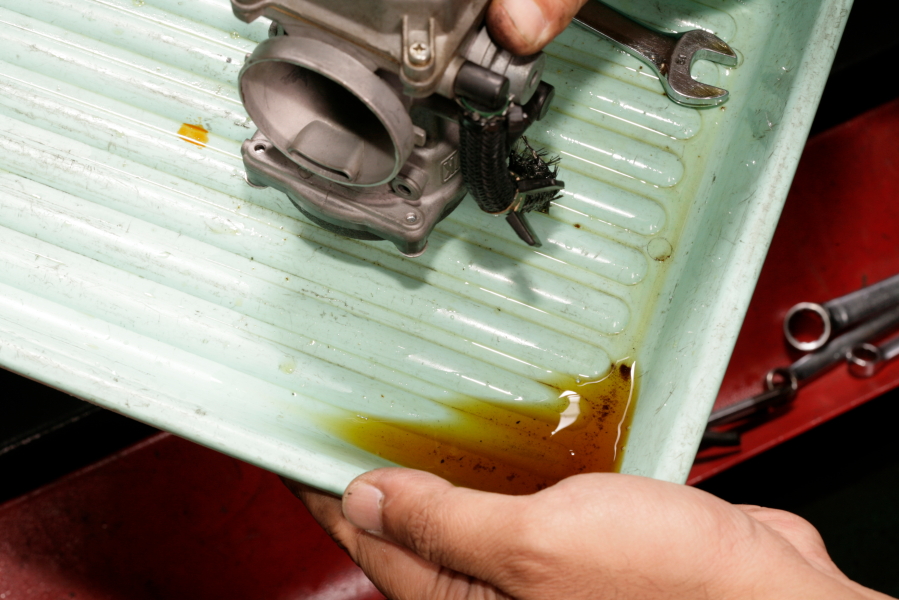 Fuel can burn at any time. I think the majority of the riders are aware of that, but unexpectedly fuel is "raw". Besides, I do not notice that I ride my motorcycle for touring every weekend, but if I do not ride every few months, I feel bad combustion such as deterioration of starting property and a decrease in the feeling of power.

On the other hand, if the immobility period is in units of years, the deterioration of fuel will progress further, and the viscosity may increase or solids may be generated. It is uncertain what kind of state it will be in because it depends on storage conditions such as temperature and humidity, but if there is a strange odor from the fuel tank and there is sediment like simmering inside the carburetor, even if you add new fuel it is useless and requires disassembly and cleaning. 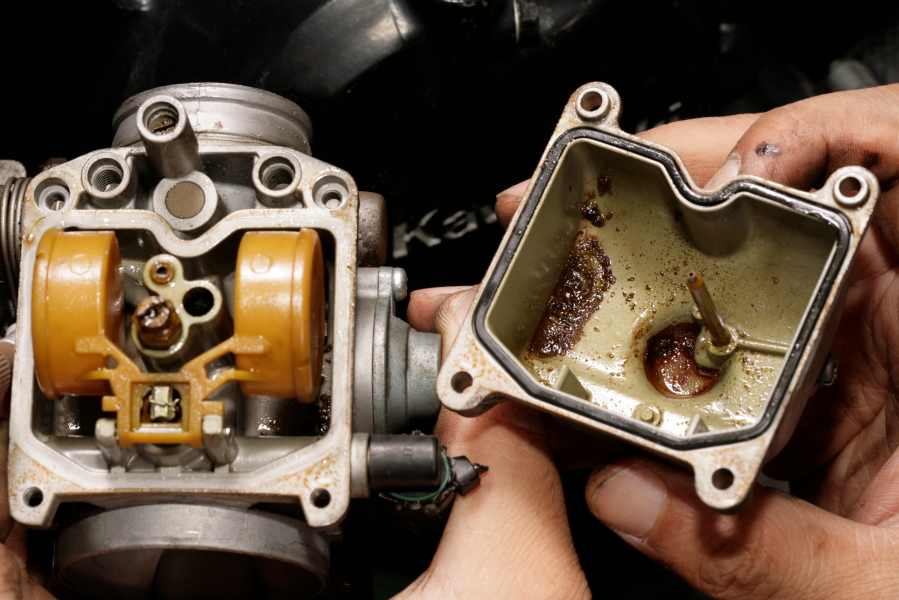 Dirt adheres to the ceiling of the float chamber and the main jet is also clogged. Even if you put new fuel in this condition, it will not be in very good shape. If the rotten fuel is moist, it may be able to be dropped with a parts cleaner, but if the deteriorated fuel is dry, it is necessary to dissolve it with a carburetor cleaner and remove it.

The odor of the deteriorated fuel accumulated in the removed chamber after removing the carburetor from the engine is unique, so you will want to quickly clean and restore it. However, impatience is prohibited. If anything, it is important to work with a sitting down.

How to get dirty inside the carburetor = how to rot, you can roughly divide into dry dirt and wet dirt. The former has a longer storage period and is completely free of volatile components in the float chamber. On the other hand, the latter is a state in which a part of the liquid component remains.

In either case, dirt stuck in the fuel passage must not be pierced or scraped with hard materials such as drill blades or wire. Whether it's an air passage or a fuel passage, all the passages inside the carburetor are strictly dimensional for weighing.

The dirt that is blocking the pilot jets or the main jets that fuel passes through a thin pin vise may enlarge the inner diameter of the jets because the dirt is hard. Then, the amount of fuel passing through the enlarged jet increases, so there is a possibility that the carburetor setting becomes thicker.

On the contrary, if you enlarge the pilot air jets, which are the passage of the air and main air jets, have a possibility that the amount of air increases and the carburetor setting becomes thinner. 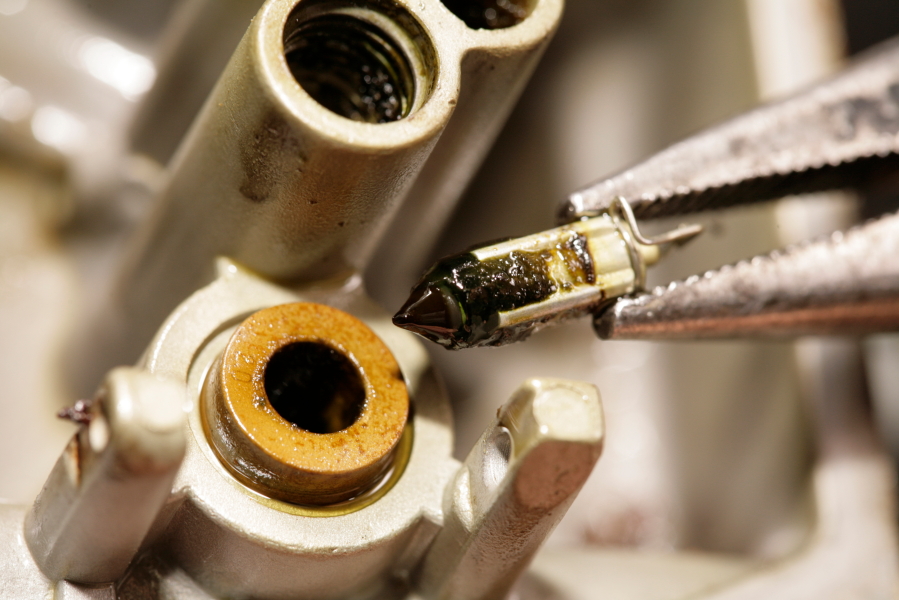 If you think about a badly dirty float valve, it's safer to take this opportunity to replace it with a new one. If there is a scratch on the tip, it will cause overflow, so let's replace it surely. The condition of the valve seat in which the float valve enters is also important, and if the seat portion is damaged, the fuel may flow even if the float valve is closed, so the dirt is wiped off with a cotton swab. 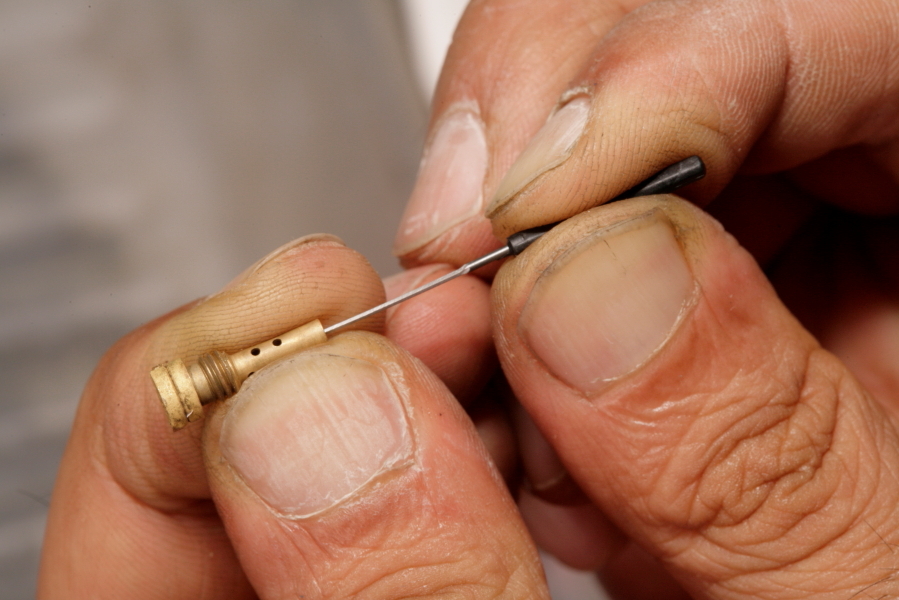 Dirt that cannot be removed by the cleaner alone is gently removed with an ultra-fine needle special to carburetor cleaning. Never scrape to enlarge the hole.

Use chemicals that spread throughout the passage to remove the dirt 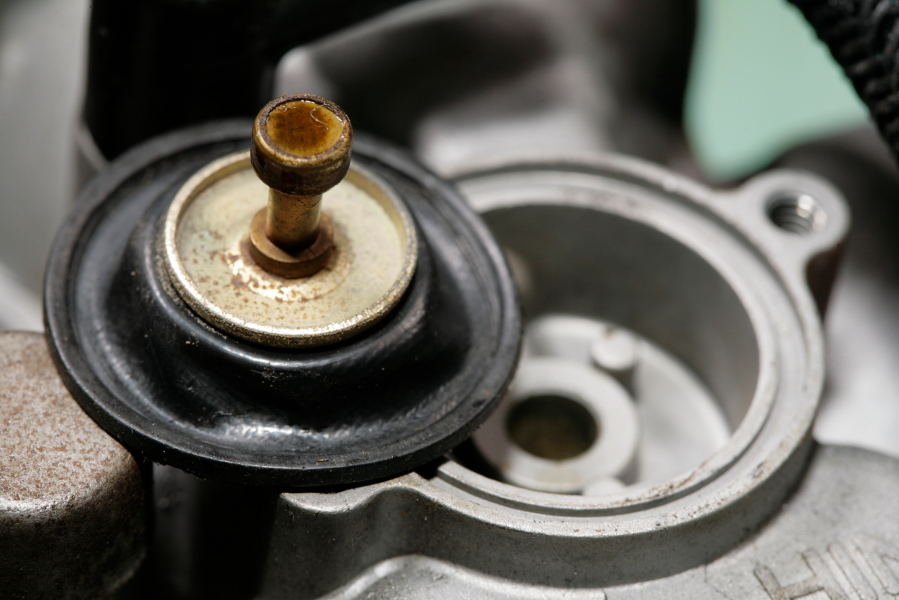 An air-cut valve that prevents the bulging" sound from appearing when the throttle is suddenly closed while riding. Since there is a risk that the rubber diaphragm will be altered by the carburetor cleaner, remove it in advance.

The pilot screw adjusts the amount of air supplied to areas with low throttle opening. Since the spring, washer, and O-rings are built-in, if the washer and O-rings remain on the carburetor side when the screw is removed, pick them up without leaving them.

This is done by setting the spring, washer, and O-rings on the pilot screw. Depending on the type of carburetor, there is also a type with an airscrew instead of a pilot screw, in which case the O-ring is not incorporated.

It is safe and reliable to remove the dirt from the carburetor using chemicals that react only to altered fuel, rather than sticking, shaving, or physically removing the dirt in carburetor. In this case, the parts of each part, such as the airscrews, pilot screws, pilot jets, main jets, float, and float valve are removed beforehand.

Depending on the type of cleaning chemical, it may affect the rubber material, so do not forget to remove the rubber material such as the starter plunger, the air-cut valve, and the valve piston of the negative pressure carburetor.

There are two types of chemicals called carburetor cleaners, aerosol type, and immersion type, but in this maintenance article, I used YAMALUBE super carburetor cleaner, which is diluted with fuel. This product is characterized by a mixture of fuel 7: cleaner 3 so that it can stubbornly penetrate dirt and spread to every corner of fine passages where wires and brushes cannot reach. 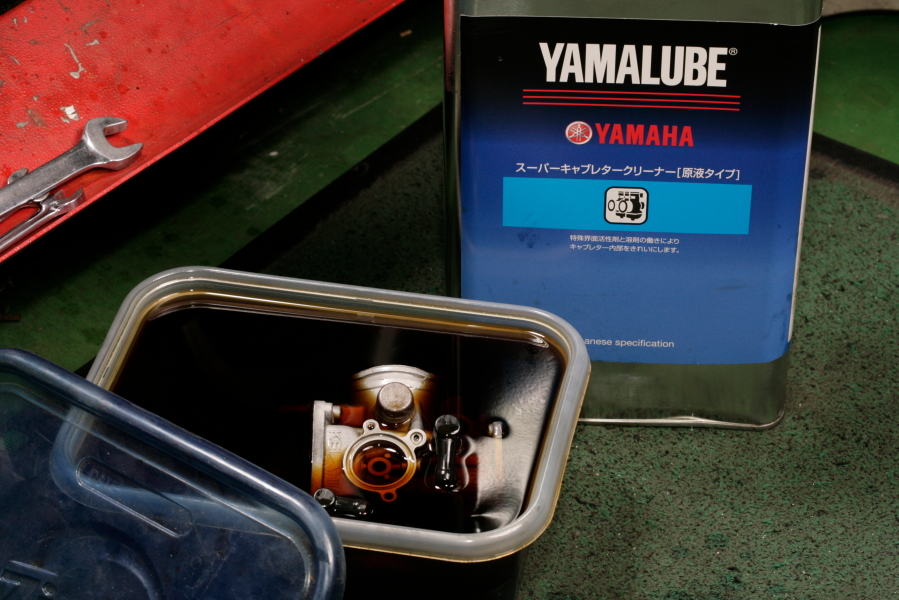 If you soak the dirty carburetor in a liquid-type carburetor cleaner diluted with fuel and wait for about an hour, the dirt will fall cleanly. This method is recommended because it is possible to pass a thin and narrow hole without poking the holes in the carburetor. After cleaning, spray parts cleaner and air through it so that the cleaner doesn't leave any residue in the passage.

On the other hand, there is no image, but parts such as jets and jet needles are put together in a plastic bag with a zipper, and if you spray an aerosol type carburetor cleaner on it, the dirt will dissolve and shiny metallic luster will be restored.

However, if the cleaner component remains halfway, it may cause the inside of the carburetor to become dirty again, so it is important to wash away the cleaning component with a parts cleaner when the stain is removed. If you restore the carburetor without putting too much time, set it in the engine, and do it through fresh fuel by riding. and it is best as a rinse after washing. Also, if you do not plan to ride for a while after cleaning, do not leave the fuel in the float chamber.

[NSR250SE Review] I knew the 2-stroke was fun! “Let’s talk about my bike, Webike users!”
KUSHITANI Spring / Summer Jacket: The Best Size to Match is By Height