Home
Webike Original
How to
DIY! How to Deal Clutch Sticking Especially in Motorcycle not Used for a Long-time 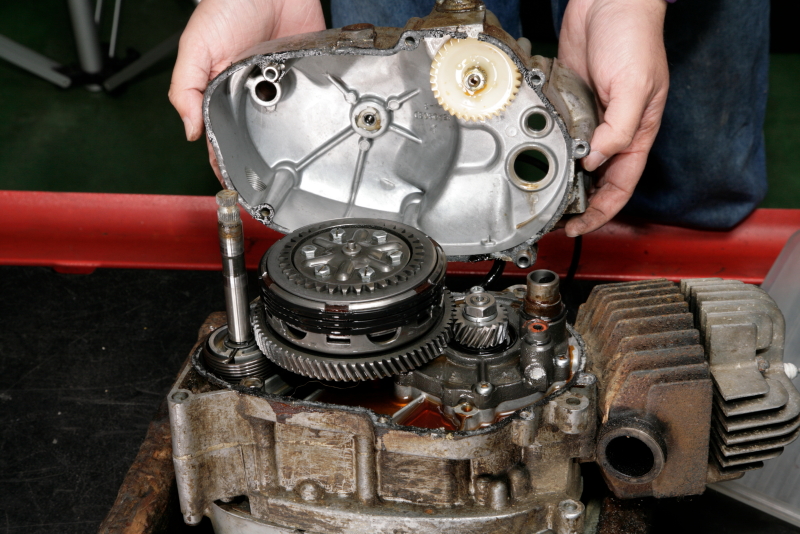 The clutch lever that always grips by shifting up and down the motorcycle with gear. If you're a rider, you know that holding the clutch lever can keep the driving power, but what kind of behavior is happening inside the engine?

And in most commercial motorcycle, the clutch functions with engine oil attached inside the engine. Therefore, it is called "wet". The synonym for this is a "dry" clutch that is not soaked in engine oil.

Despite the fact that it is important for the clutch not to slip, the reason that the wet clutch is soaked in oil that is intended to absorb the heat generated between the clutch and the friction plate when transmitting the power of the engine.

Causes of clutch sticking and how to peel it off

If the adhesion period is long, moisture and oil may replace the adhesive. 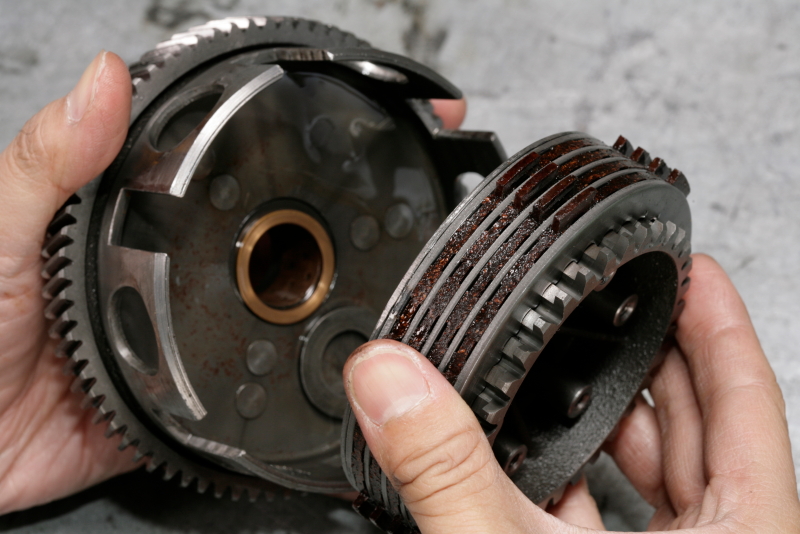 The clutch plate and friction plate, which should originally be separated one by one, have come off from the clutch housing. If the engine is stored in a high humidity environment or moisture enters the interior, the clutch housing itself may be damaged by rust. 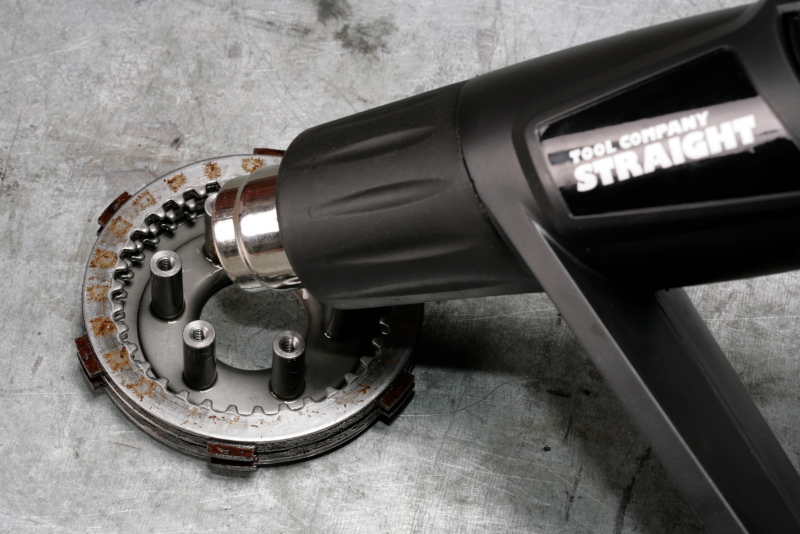 It is a wet clutch that is lubricated by soaking in the oil, but tension symptoms may occur while the clutch plate and friction plate may remain in close contact with each other, and sticking symptoms may occur.

When the clutch is stick, the clutch lever is still connected to the engine and the transmission, so as soon as the change pedal is put into the low gear, the driving force is transmitted and the motorcycle is about to start. If you put the gear without disengaging the clutch, it is easy to imagine that a big impact will be transmitted. At this time, it is enough to do only the engine stall, but since it suddenly moves forward, it is very dangerous if you are surprised to stand up or start unexpectedly.

It depends on the storage situation of the motorcycle, but the cause of the tension may be that the oil on the clutch plate and the friction plate will flow down, causing the metal clutch plate to rust, or the remaining oil between the close plates may be altered.

If it is a mild sticking symptom, it is peeled off by the shock when the gear is put, and you may be able to ride without discomfort as usual afterwards. However, if the clutch lever is stick firmly, it will not be peeled off even if a shock of the driving force of the engine is given, and it will be dangerous because the driving force will not be cut even if the clutch lever is held when the engine is not stalled even if the gear is put.

In any case, the sticky clutch does not try to solve it symptomatically, but it is necessary to solve it fundamentally by disassembly repair.

If the clutch gets sticks.

If there are new parts available, it is ideal to replace all 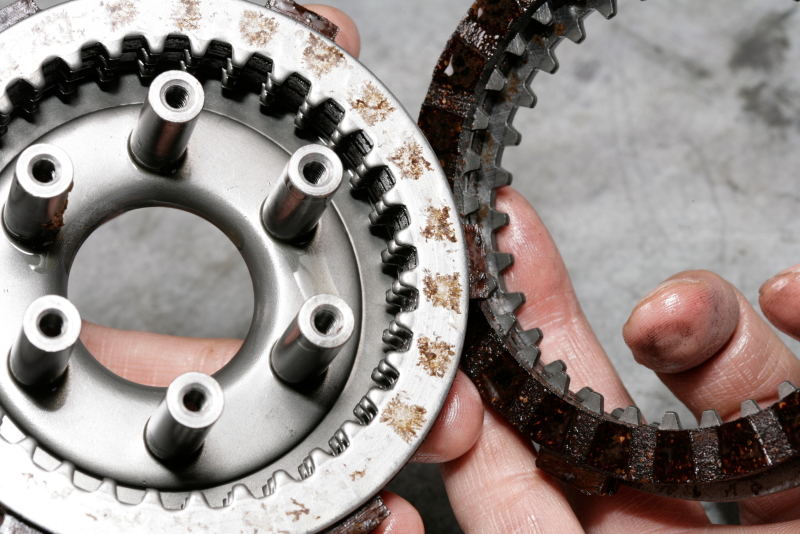 The friction material adhering to the clutch hub and clutch plate, which interferes with the half-clutch and causes poor adhesion when the clutch is engaged, should be scraped off cleanly with oil stones. When applying the oilstone, spray the anti-corrosion lubricant to avoid excessive scraping before working.
Click here to purchase Oil Stone Products 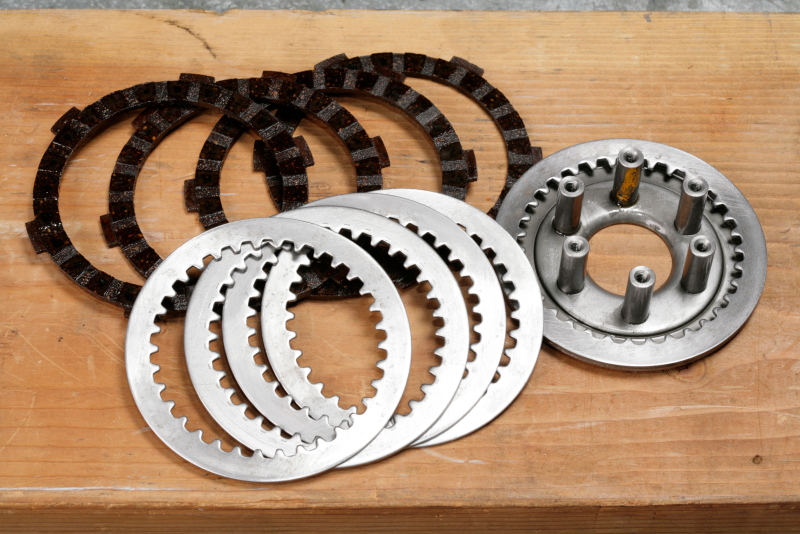 Since the new parts could not be arranged, clutch parts were cleaned and reused. Both the clutch plate and the friction plate are set into 4 pieces, and when the engine is started to restore in a dry state since the oil is drained until the oil circulates, it is restored from being immersed in the engine oil or the transmission oil.

As an example of clutch sticking, YAMAHA's small-displacement model of the '60s is introduced. The engine has 2-strokes, but the transmission and clutch are equipped with a wet multi-plate clutch that is lubricated with gear oil. It seems that it was manufactured about half a century ago and was stored indoors for about 20 years, so even if you put it in the low gear from neutral with the engine running, it will stall and will not come off.

When the crankshaft cover is removed and the clutch is removed, the clutch plate and friction plate, which should have come off one by one, come off together, and you can see that they are completely tight. Originally, I would like to replace the plate with a new one, but since new parts are not available in too old models, I will peel off the stick plate and try reuse.

Fortunately, the friction plate was removed when the clutch was heated with a heat gun and the gap of the plate was heated with a flat screwdriver, in the hope that the oil of the gear oil would remain a little, and the viscosity would decrease by increasing the temperature, and it would be easy to peel off.

Friction plates that attached to a metal clutch plate like a scab are carefully scraped off with an oilstone because there is a risk of contamination into the oil when the feeling of the semi-clutch deteriorates and peels off. Besides, if the friction material on the surface of the friction plate is greatly peeled off, it is necessary to obtain and replace new parts using the net even if it is difficult to obtain OEM parts.

As a result of this work, clutch interruptions have been restored so that both clutch and shift changes can be made without any problems. It is best not to leave the clutch for a long time and check the operating condition of the clutch regularly, but when you know that you can do it for a long time, if you tie it with a tie wrap while holding the clutch lever, the gap between the clutch plate and the friction plate will be maintained, and it is good to remember that it is effective to prevent sticking.