Home
Webike Original
How to
DIY! How to Remove and Diagnose the Hardened Fluid in the Brake Master Caliper

Disc brakes, which are standard equipment for sports bikes, can be braked by operating levers and pedals, and are released if you release the brake lever. However, depending on the condition of the calipers, the movement of the brake pads may deteriorate, and it may cause the dragging symptom. Always check the brake caliper when you want to ride after keeping the motorcycle for a long time in the garage.

Why it's important to check the remaining amount of brake pads 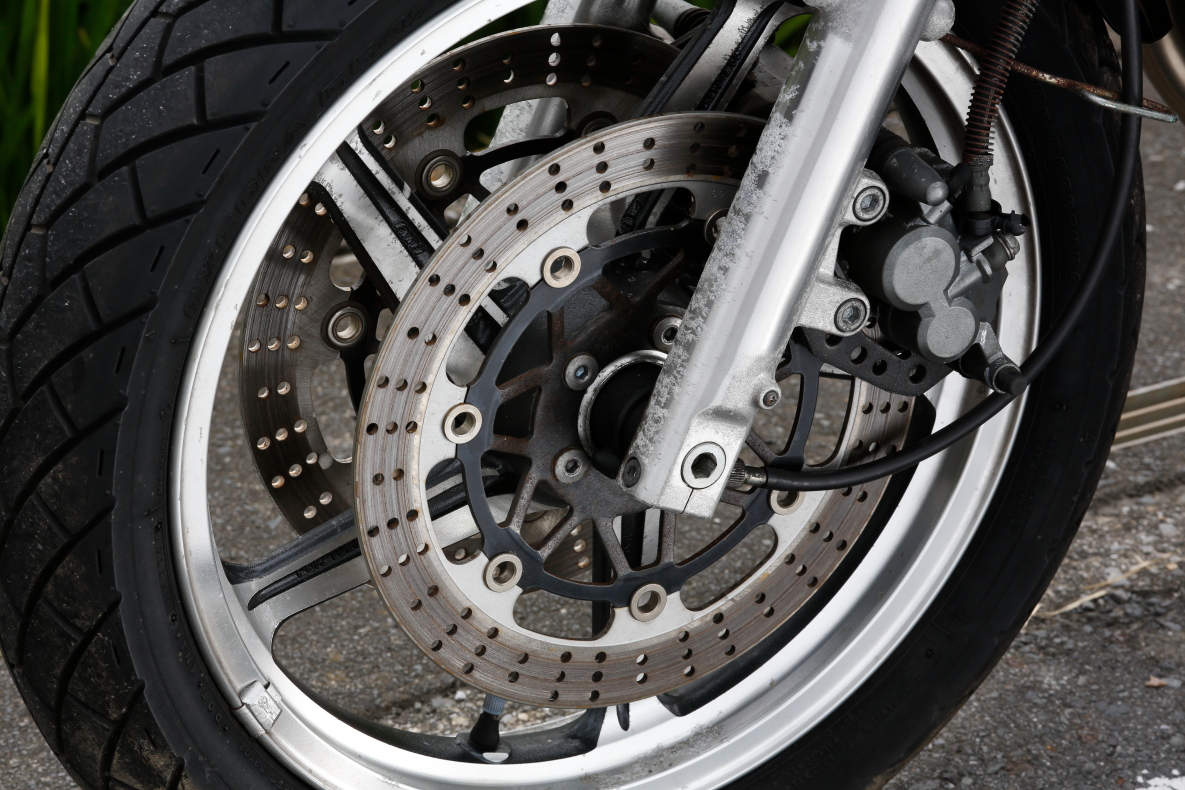 The KAWASAKI ZEPHYR has been stored without riding for several years when the brake lever is gripped, the front brake is left in a state of handiness. The causes of brake sticking can be attributed not only to the caliper seal problem mentioned here but also to the sticking of the slide pin of the caliper and the piston cup of the master cylinder.

As the brake lining of the drum brake becomes worn, the play of the lever and pedal increases. This is because the camshaft and brake shoe, which are parts of the interior of the drum brake, operate from the same position regardless of the remaining lining. 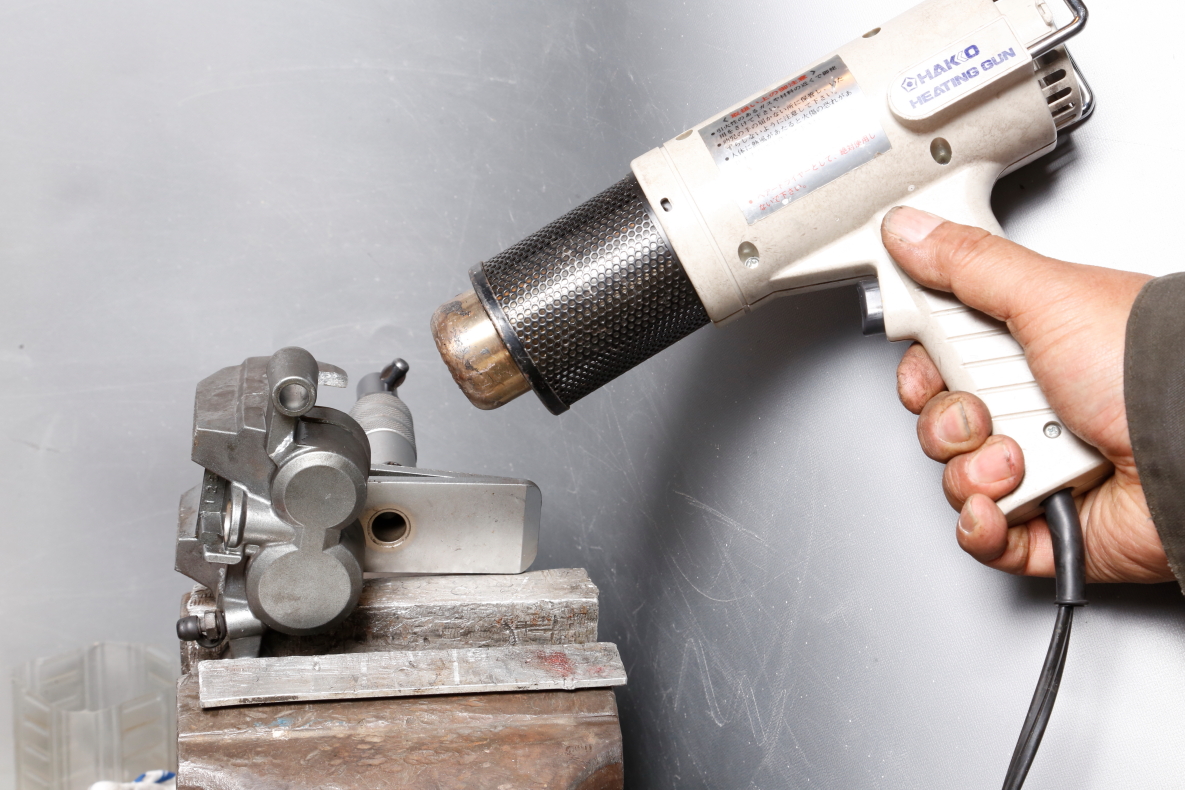 When the caliper piston is hard to come off, it is most reliable to push it out with fluid pressure before removing the brake hose. If the caliper is left alone, soak it in hot water or heat it with a heat gun. The brake fluid itself softens from the ticking state by hot water.

Piston seals and dust seals play an important role in disc brakes that cause caliper pistons to rush out according to wear on brake pads. These are O-rings with a square cross-section and are set inside the caliper while closely contacting the caliper piston.

The piston is pulled back by rollback, but it is not mechanically pulled back, so when the brake pads wear out and exceed the limit of the elastic deformation of the piston seal, the base point and start position of the piston change, from which the cough and pull back begin again.

The disc brakes in which does not change the gap between the brake pads and the brake disc without artificial adjustment, and as a result, the play of the brake lever and the pedal does not change and they established by the elastic deformation = rollback of the piston seal. The same applies to one-piston pin slide calipers for moped motorcycles or 6-pot calipers on the other side for supersport.

Seal deterioration and alteration fluid interfere with the piston movement 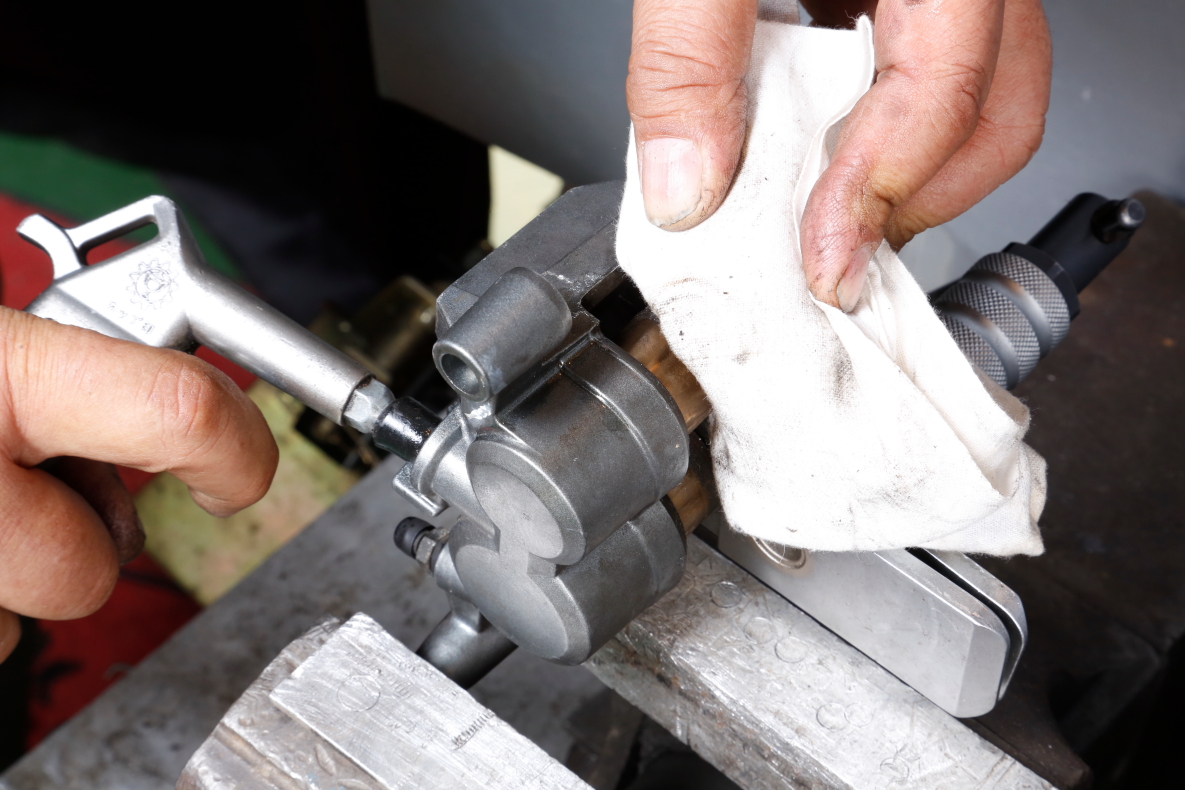 If there is a compressor, it can be pulled out by high-pressure air, but when the air is blown by the air gun to the caliper, the piston pops out and is extremely dangerous. Separate the air gun from the caliper, blow air little by little, and push out the piston little by little. If the movement is bad, it is safer to connect the brake hose and push it out under hydraulic pressure. At this time, it is better to put water in the master cylinder instead of brake fluid. In that case, the water in the master cylinder should be dried after the work.

If you release the brake lever that you hold on to the disc brake, the rollback will pull the caliper piston back, but the condition of the piston seal and dust seal is important for that purpose.

Brake fluid, which is the hydraulic fluid for disc brakes, has hygroscopic property, and gradually deteriorates due to humidity and riding in the rain. The decrease in the boiling point is representative of deterioration, but it may become sediments and adhere to the area around the seal. For piston seals, it is important not to leak the fluid along with the rollback. However, due to the structure in which the piston itself protrudes with the wear of the brake pads, it can be sufficiently exposed to the outside of the seal with the fluid adhering to the outer circumference of the piston.

Therefore, when fluid is altered, when solidified and sediments with the seal groove of the seal itself or caliper, it causes troublesome symptoms such as decreased elasticity of rubber and excessive friction between the seal and the piston.

Besides, even if sediment occurs in the gap between the outer circumference of the dust seal and the seal groove on the caliper side, it may troublesome and the dust seal which does not fit in the seal groove may come off. Even if the dust seal comes off, the piston seal is inside, so the brake fluid will not leak immediately, but in this case, a caliper overhaul is required. 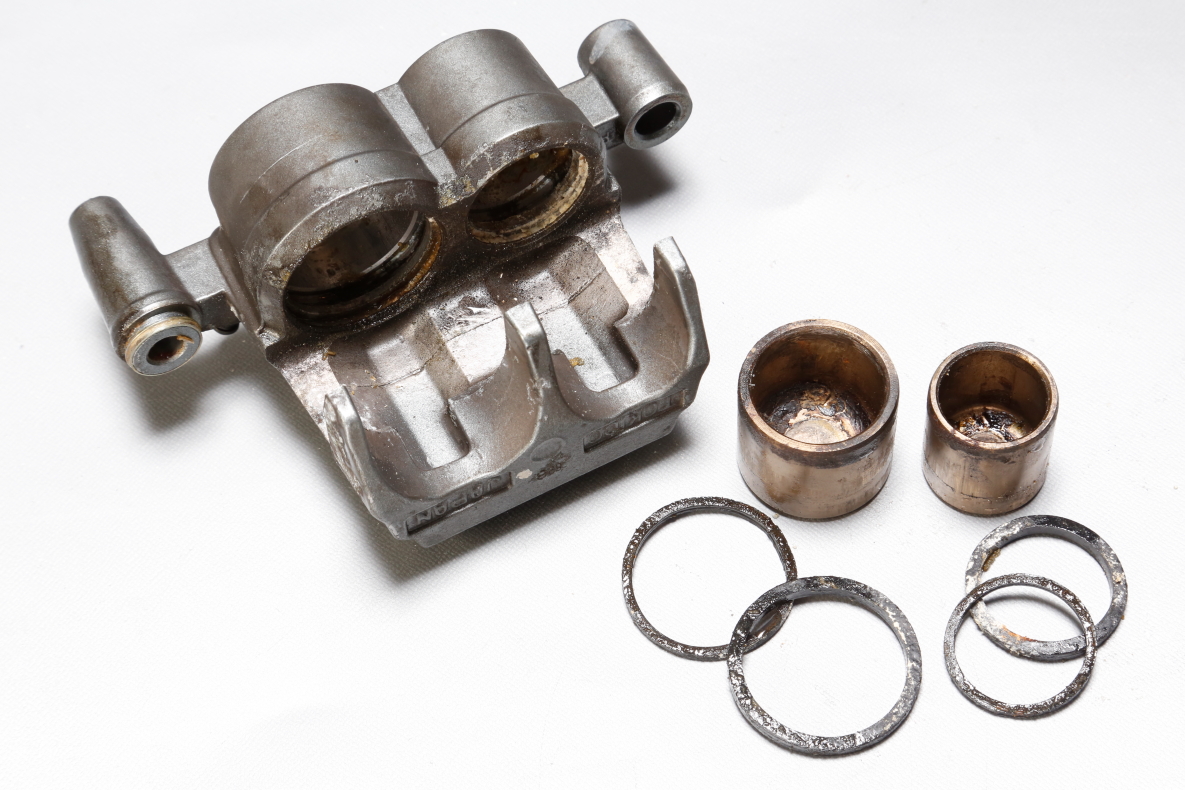 Although the dust seal does not pop out, the seal with the deteriorated brake fluid is fixed that has lost elasticity. If the brake pads are worn and left in a state where there is a lot of push-out of the piston, rust may occur in the piston itself, but fortunately, it was safe. In the case of a vintage motorcycle, some models use a dust seal with a bellows shape, but the ZEPHYR is an O-ring with a cross-section of the piston seal and dust seal.

If there is tick sediment on the tip of the caliper piston, remove it completely and replace the piston seal and dust seal with a new one. Even if you make a mistake, do not set a new seal with dirt remaining in the seal groove.

Since the brake fluid in the caliper also wraps around the backside of the seal, if the seal does not adhere to the caliper due to the dirt in the groove, it may cause new fluid leakage, and the tension may also occur in tightening the piston.

The dirt accumulated in the caliper groove is hard, and if you try to remove it roughly, it may damage the seal groove. Since the brake fluid has hygroscopic properties, it is easy to fall off by soaking hot water.

Next, when cleaning, it is important not only to clean the parts visible by the precision screwdriver or the pick-up tool but also to scrape the dirt not only at the bottom of the groove but also on the wall part so that the elasticity of the piston seal works properly. It is also effective to use a special tool to clean the caliper seal groove. 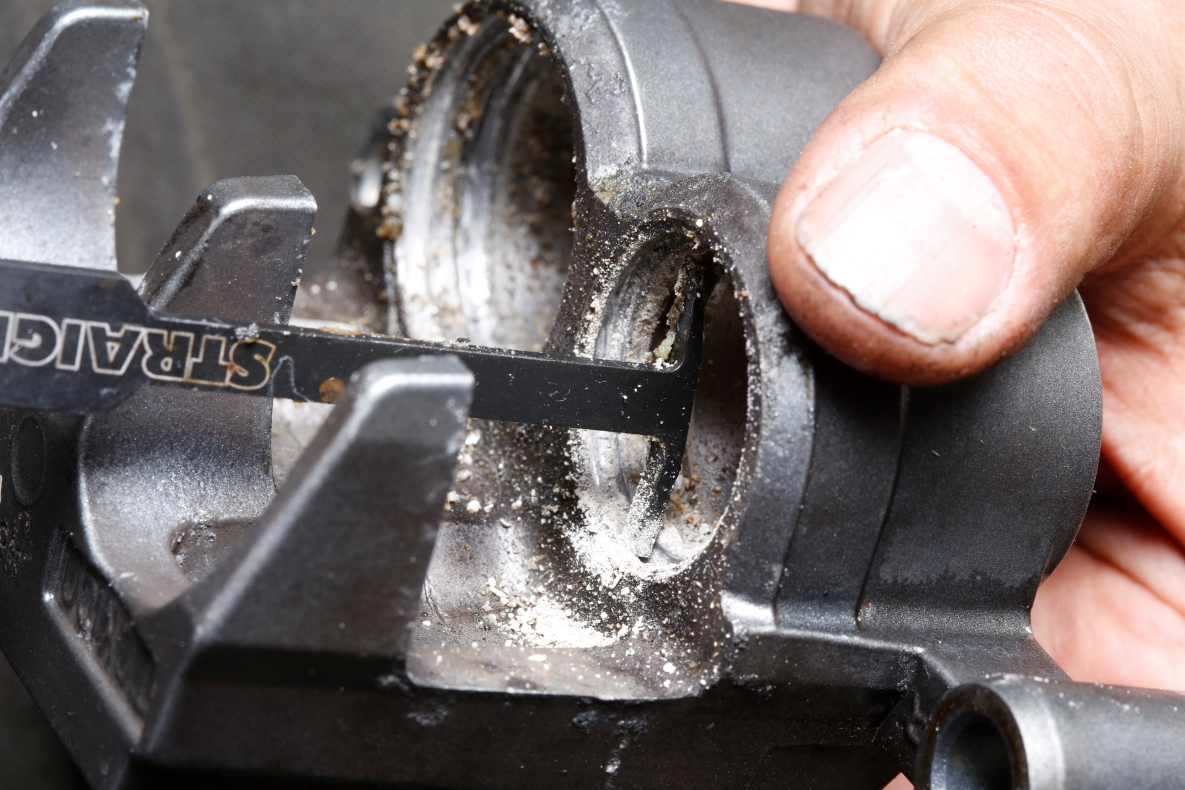 Here are the highlights of the caliper cleaning that has become dirty with sediments. Dirt accumulated in the seal groove is scraped off with a special tool.

Pick-up tools and precision screwdrivers are sometimes used, but it is important to remove not only the bottom of the seal groove but also the dirt from the walls without leaking. When cleaning the seal groove and incorporating a new seal, apply a thin layer of rubber grease that lubricates metal and rubber to reduce friction loss without twisting the seal when inserting the piston.

Besides, there is a role to protect the surface of the caliper piston against moisture, so it can be expected to have anti-rust effects.

However, since the principle that the piston begins to rush out if the brake pads wear out does not change, and if the piston with brake fluid is left unattended, sediment will eventually occur. To avoid trouble, it is effective to regularly wash the calipers with neutral detergent for lubrication and surface protection with a rubber seal assembly spray. 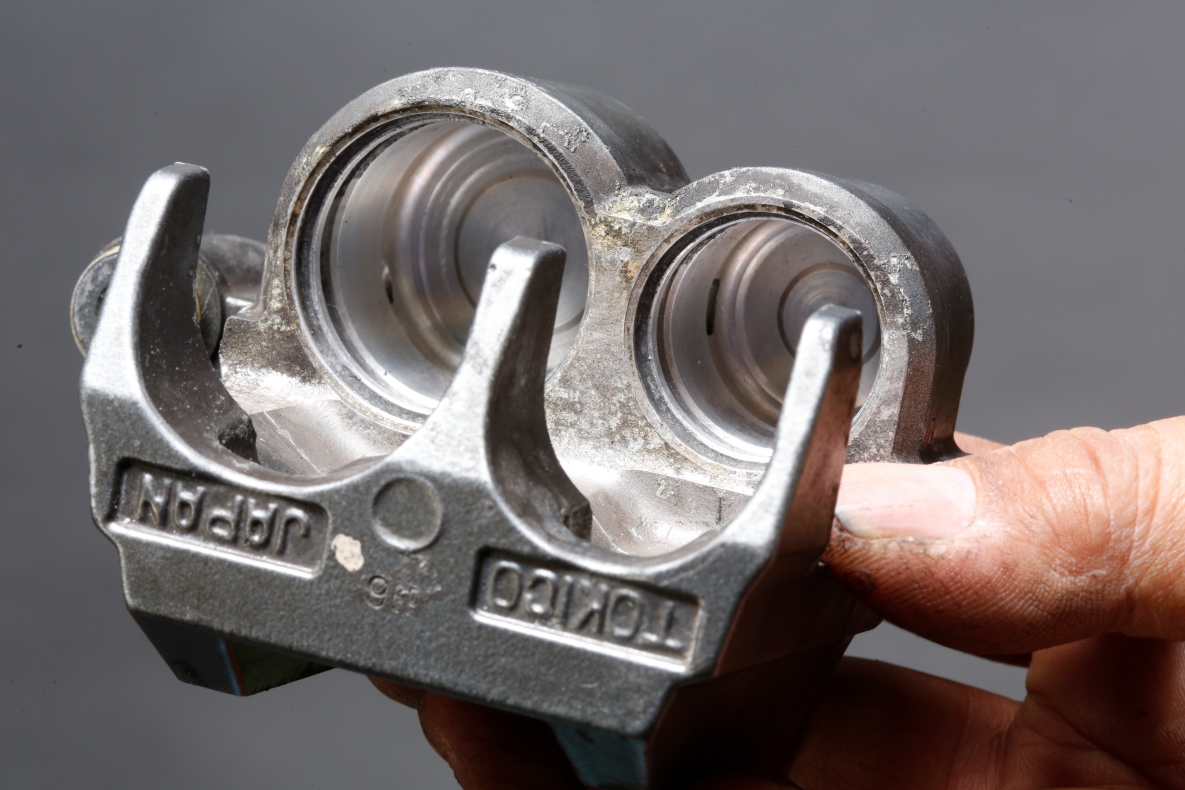 The dirt which had been deposited in the seal groove is completely removed, and the refresh is completed. This caliper is easy to clean because it is a one-push type, but the difficulty level is greatly increased when it is an oncoming piston. To avoid such trouble, it is most effective to periodically wash the caliper and apply rubber seal spray to remove the piston. 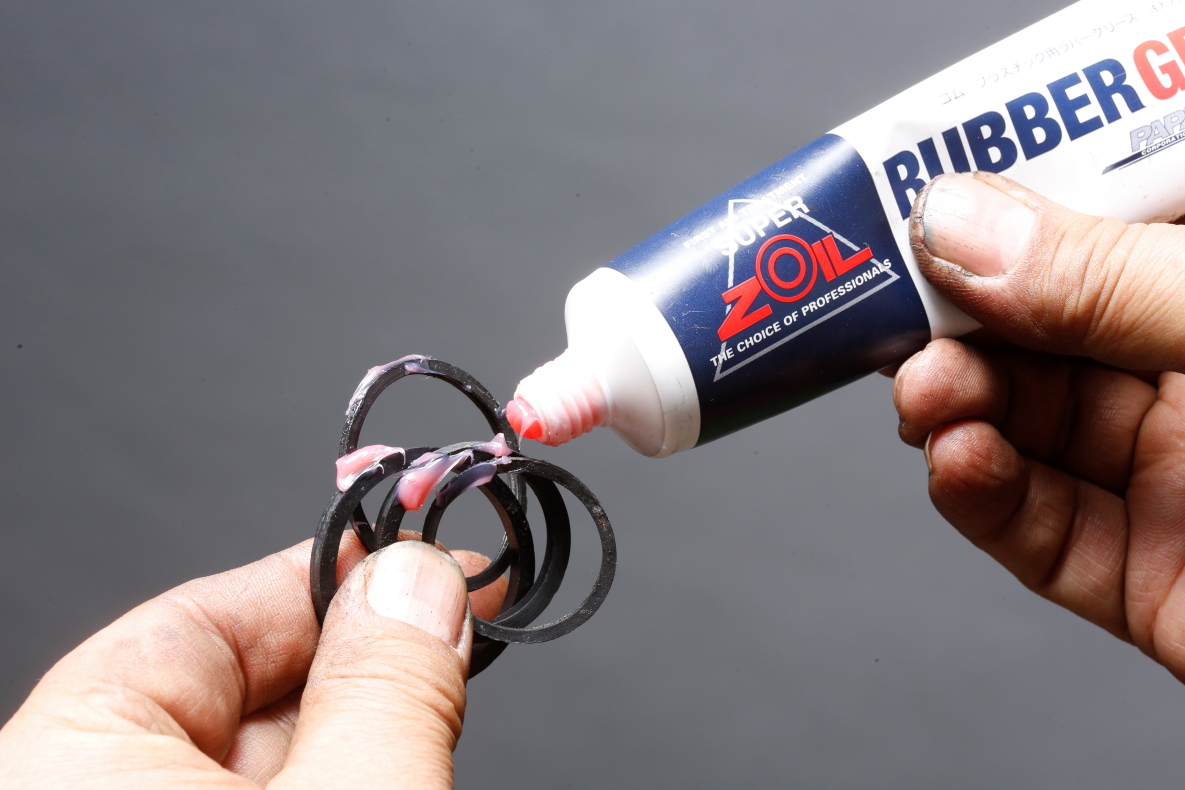 Apply a thin layer of rubber grease to the piston seal and the dust seal. Some service manuals instruct the application of the brake fluid, but considering that it adheres to the exposed parts of the brake caliper and pistons, it is better to use grease.