This is the corner of a machine that has originally disappeared in the middle of development without releasing into the market world.But this time, I would like to introduce later a model that has been commercially available in the market.VT250 SPADA was actually the CORSA ROSSA 25V?

The Italian image has been infused into naming and design

These design sketches were exhibited at the "MOVE" exhibition held at Honda Welcome Plaza Aoyama in August 1989.This was an event that was planned and implemented by the Honda R & D Laboratory Asaka Research Institute, and an exhibition of the design studio style of the research institute was held.It is also the timing when the VT250 SPADA was released just in December 1988, and image sketches of this model, 1/1 rendering, clay model, mock-up model are exhibited, and the process of the design was introduced in the shape to show the actual model that was actually released.

By the way, "SPADA" word of VT250 SPADA means "SWORD" in Italy language.The red body color is called Italian Red, and green is called Tuscan Green, etc. that is a strong awareness of Italy.The origin is probably from the model name "CORSA ROSSA 25V" in the photo sketch.This is also Italian, meaning CORSA = Race, ROSSA = Red, and it can be "Race Red" in English name. It reminds me of Ducati and Ferrari, but because red is used for Honda's race image, it's a meaningful naming. 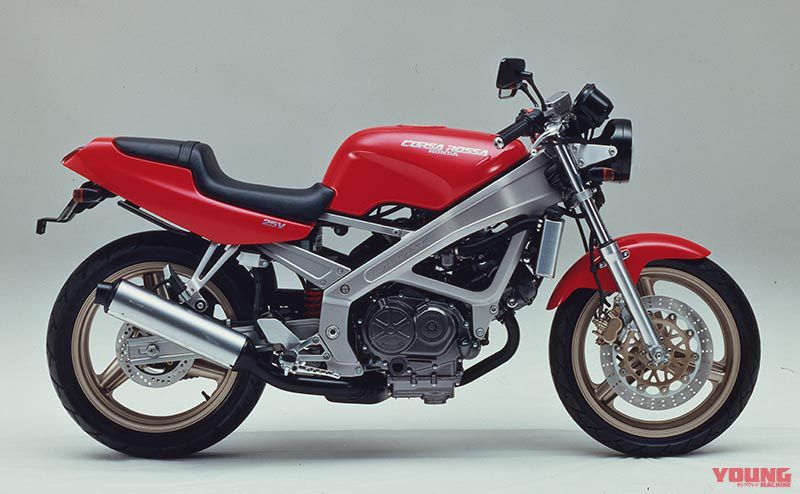 [HONDA CORSA ROSSA 25V Mock-up Model 1989 MOVE Exhibition] From the image sketch to the mockup model, the model name remained CORSA ROSSA.In addition, it is also interesting that the stamp of the frame that becomes "CASTEC" in the market is named different from "ALCAST" and in the image sketch (above photo) as "HRCF". 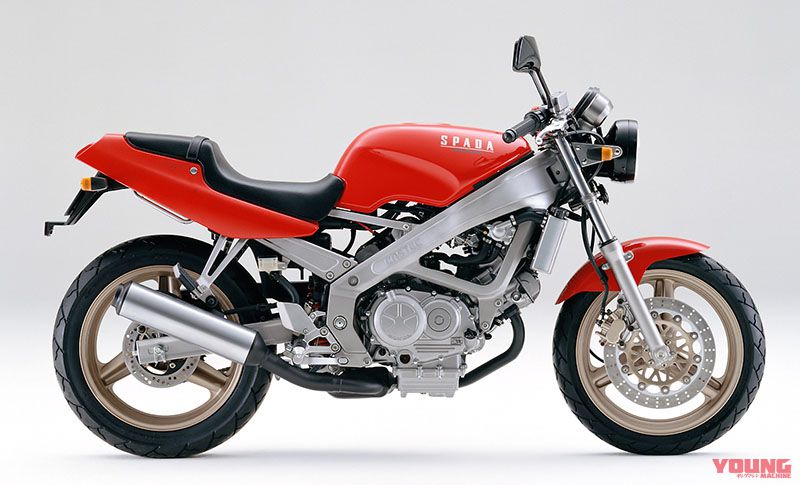 [HONDA VT250 SPADA Japanese Specification Released in December 1988] This is VT250 SPADA.The details such as the position of the blinker, the muffler end, mirror, meter are different from the mock-up, but it can be seen that it was marketed in almost the same design.

In late 1980, I was searching for a Dereplication Process

In the late 1980s, when the replica seemed boom everywhere, each manufacturer was searching for the next move.Almost at the same time as the VT250 Spada, Honda released new concept naked models such as BROS PRODUCT ONE / TWO (January 1988) and CB-1 (March 1989).The SPADA styling concept among them was "the new form of the Naked Sports motorcycle that is now claimed," and it was formed to be aimed at the "City Youth Main Sports Gear".

The keywords listed are De-replica, Commitment, Trendy, Intellectual, heart-like luxury feeling, Lightness, Identity, Fashionable, not soft, and so on, so they read the atmosphere in narrow space between the times change from Showa to Heisei.In particular, "de-replica", which was placed at the top, can be read as the most important theme of SPADA. 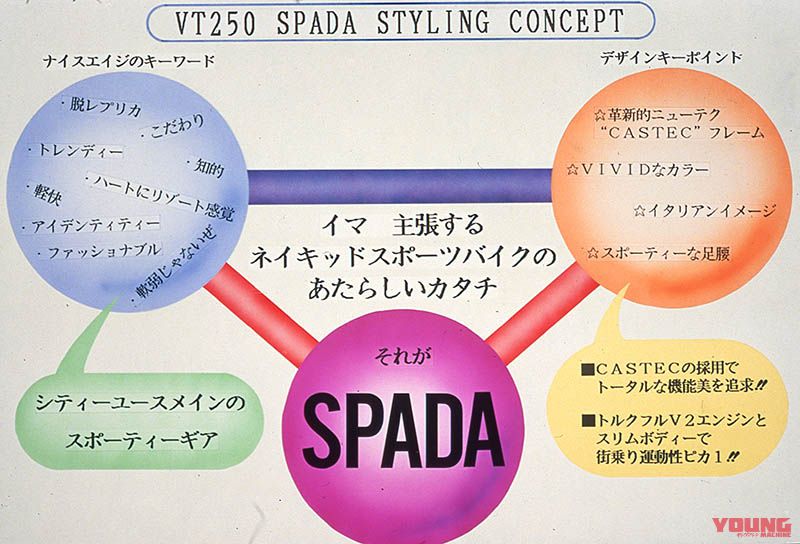 Here is a diagram of the design concept.Although it is an era when there is no PowerPoint yet, it is expressed stylishly by the typesetting charactersWhen looking at the keywords listed in the blue circle space, you can see that they were trying to respond to the needs to capture the motorcycle as a fashion. 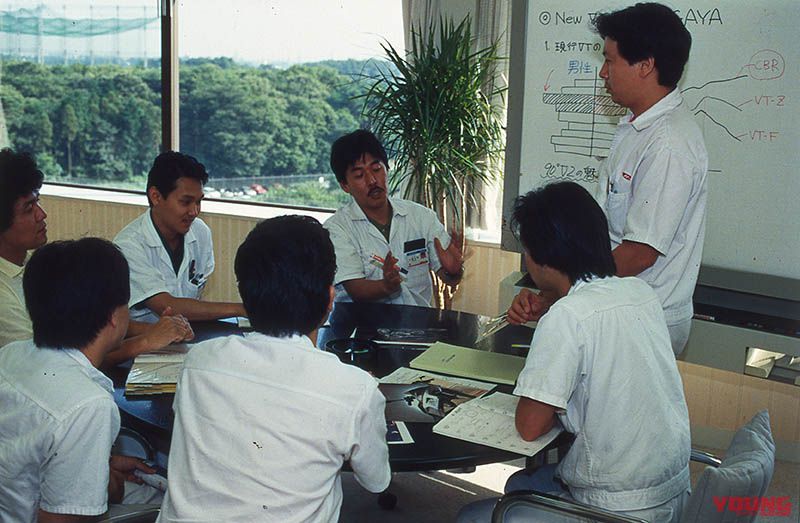 Here is the state of the conference that seems to be the early stage of developmentThe speaker in the center is Mr. Mitsuyoshi Kohama who designed the SPADA.Is it written "New VT WAIGAYA" on the board? The graph shows that sales of the VT system have fallen for CBR, and it can be seen that Honda traditional WAIGAYA meeting decided to use the 250cc 90-degree V2 model for the lever insertion method.

The characteristic frame was also from Italy

The essential thing to talk about the VT250 SPADA is the "CASTEC" frame.The world's first full cast aluminum frame for a motorcycle with a hollow integral structure was the biggest key point in the design.The root of this technology is the aluminum die-cast frame of NSR125F, which was released in Italy in February 1988 and integrating the left and right split type.It's not only to improve productivity but also to improve design than twin tube frames, and it is the centerpiece technology for SPADA who wants to balance sportiness and fashion. 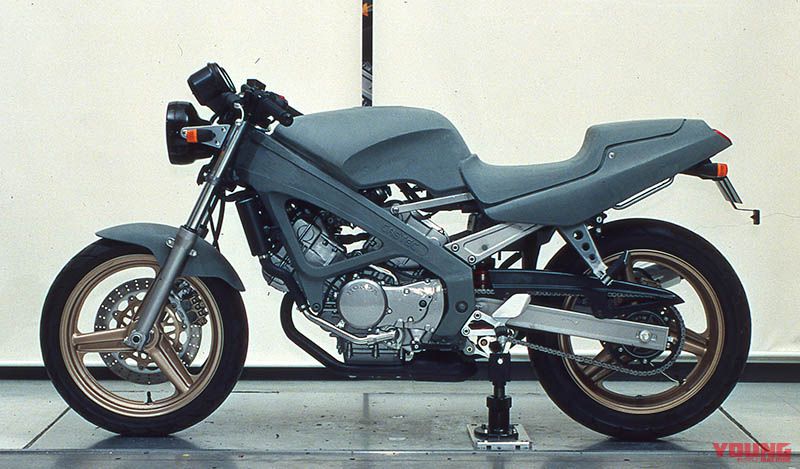 It is a CASTEC model frame which melts into a design with a clay model.It also has advantages in terms of functionality such as lightweight and high rigidity, and also a key technology to achieve "a casually good motorcycle." 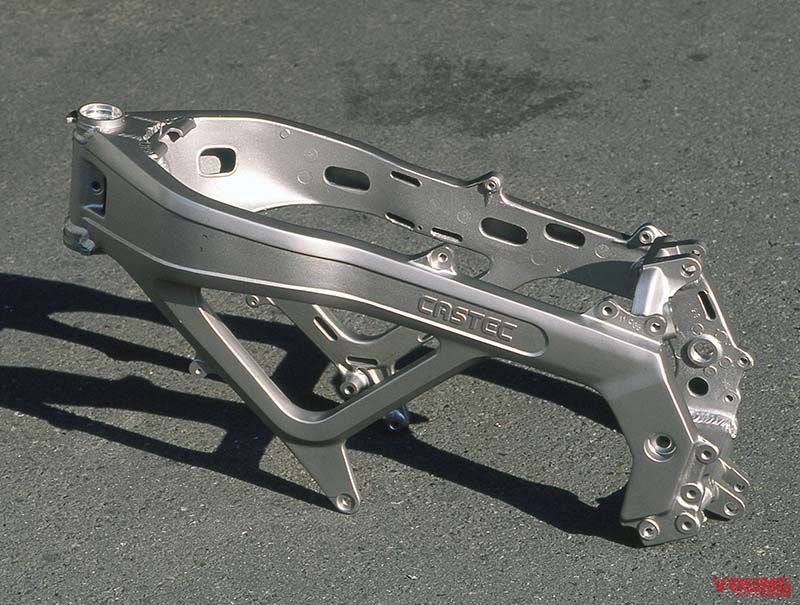 At that time, about 5 years have passed since the production of aluminum frames at Hamamatsu Manufacturing Co., Ltd. has started, and the know-how of hollow thin-wall casting technology has been accumulated, mainly focusing on the production of large-sized pivot plates.Therefore, the examination of the hollow thin-wall cast frame which demonstrates the unrivaled attractiveness of other companies has begun. 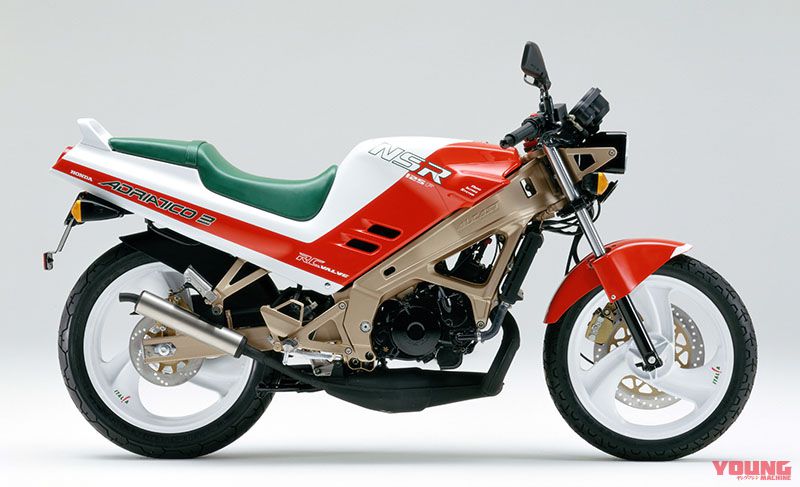 [HONDA NSR125F Japanese Specification Released in June 1989] The NSR125F, produced in Italy and released locally in February 1988, was developed as a frame design that developed a cast frame with a high degree of freedom because the style of making the full cowl model naked was popular in the field.1000 units were also imported into Japan.

With both motorcycles, you can enjoy mountain pass road with a very neutral ride, but if you really want to strike seriously, the low and medium speed corners are easier on SPADA, and CBR is better on high-speed corners.The sharp handling of the SPADA is an absolute advantage when it comes to twisting quickly and moving slowly, and can overwhelm others with a quick switching.Anyway, it is very interesting, and it quickly bends.The effective power band at the pass is also 6000-1.2000rpm, and the torque from the bottom is effective, so the dash start from zero launches demonstrates the ability that exceeds the quadruple engine directly.In addition, with a wide range of missions and easy-to-use power characteristics, it is possible to run through with a gear that is one step higher than CBR.The ability as a specialist in a tight corner is really great!!

How about CBR? The power band is from 14,000 to 18,000rpm.If you let go of the rotation, you want to keep a high rotation always because it is preceded by SPADA immediately.If you run too fast, you should hold the 2000 rpm from 16,000rpm.You'll need a lot of technique, but if you master it, you'll be able to hold down the SPADA in a tight corner.The point is whether power can be maintained.

CBR is one step ahead of the stability of the high-speed corner.From the corner entrance to the front, it's nice, and if you pull on the rear while tracing the better line, you'll be able to go around.The R-suspension seems to be able to use the best part of the race, so it's best to match it with the tires.On the other hand, in the high-speed corner of the SPADA, which is more than 100 km/h, the suspension is too soft for the speed, and the tire is too thick, so it picks up the gap of the road surface, and the tire is fine and fluffy. 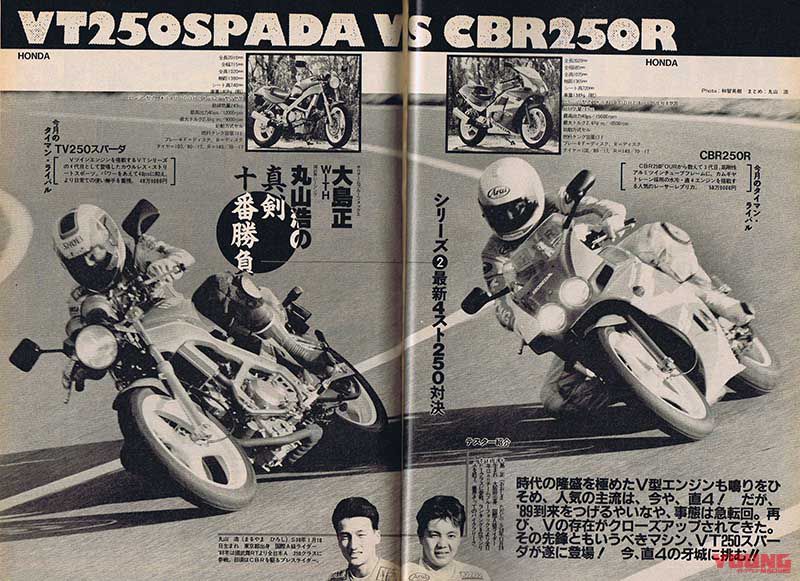 It is a VT250 SPADA that aimed de-replica, but the Young Machine still tends to showdwon the replica model.Here is an extracted of the winding showdown. 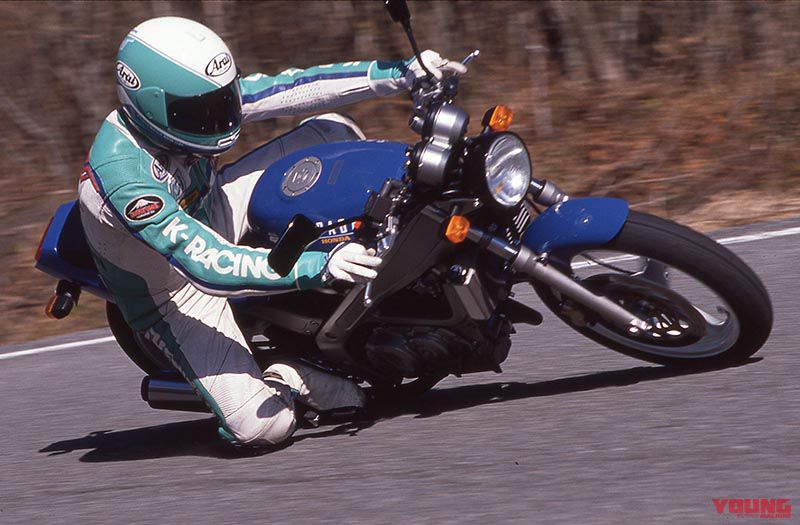 The rider is Mr. Tadashi Oshima and Hiroshi Maruyama.It was a short-lived SPADA, but now he can be seen as a race-resistant racer because of his high potential.

See All Photo Collection of Motorcycle 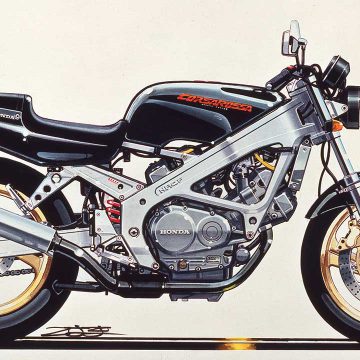 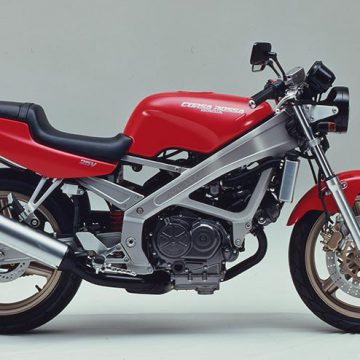 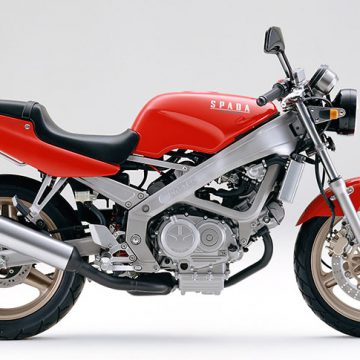 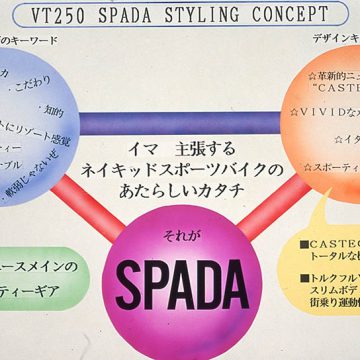 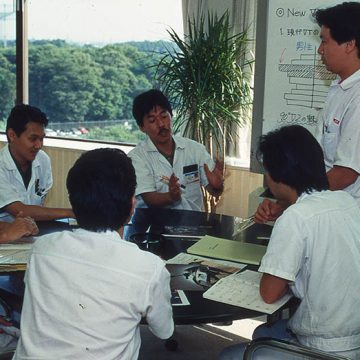 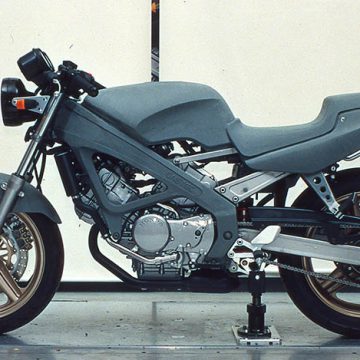 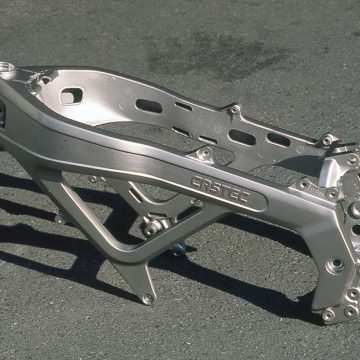 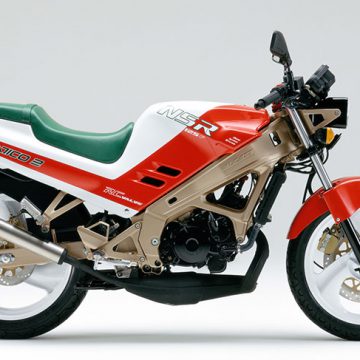 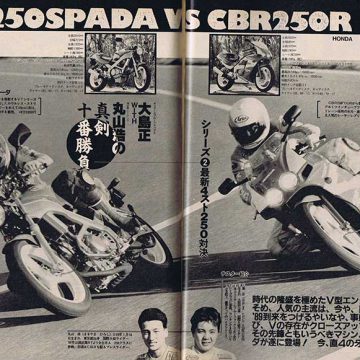 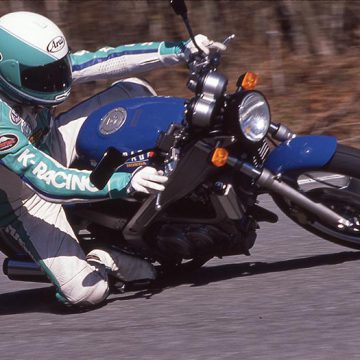