Smartphones have become an indispensable item in our lives. If you use a smartphone mount, it will be very useful as a navigation system when touring.
I also use a smartphone mount, but the one I'm using now is the one I bought about two years ago, and it's been exposed to the wind and rain and has become quite worn out. I was looking for a new mount soon, and I found a phone mount that gives off a tremendously stylish aura.

This mount can be combined with optional parts to make a difference from the conventional smartphone mounts. Great stuff!

This is SP CONNECT's "MOTO BUNDLE"!

Here are the two products I'm going to introduce to you. 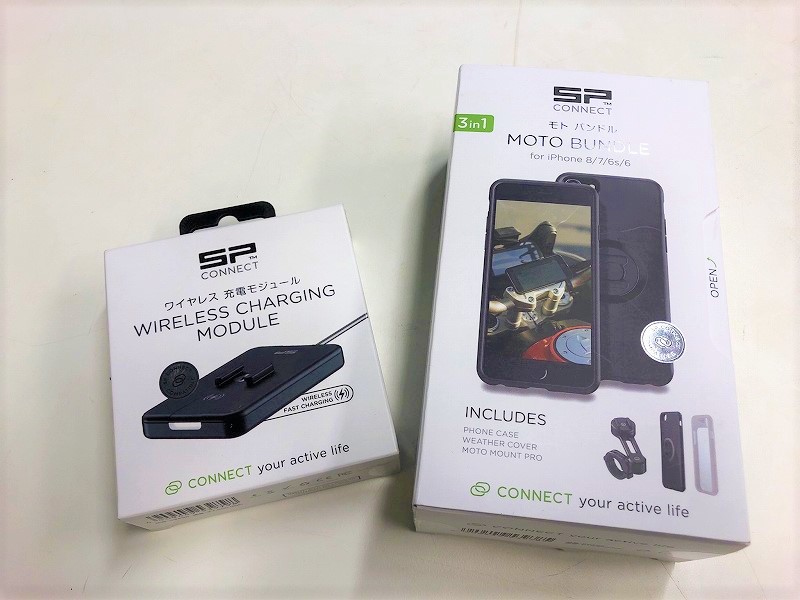 First, we'll go ahead and unpack the MOTO BUNDLE.

▼Here's what was inside▼ 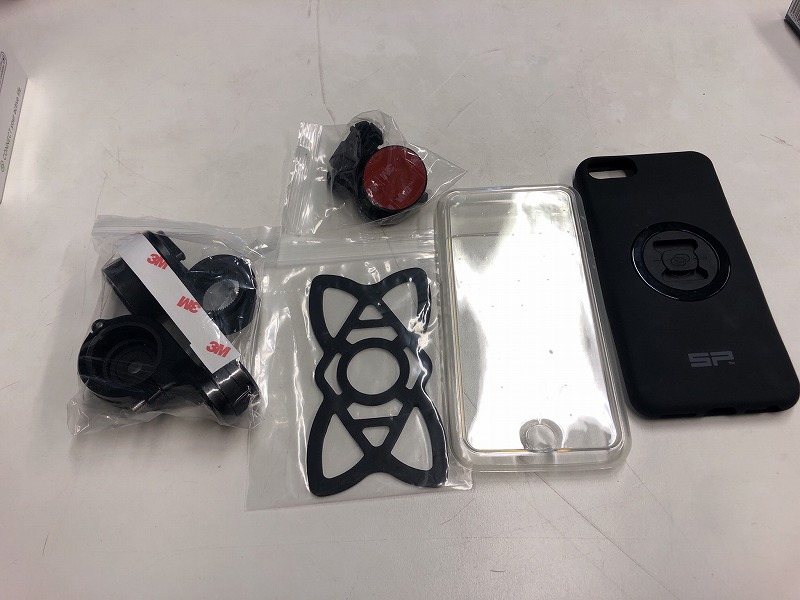 It's a nice touch that the tools are included. 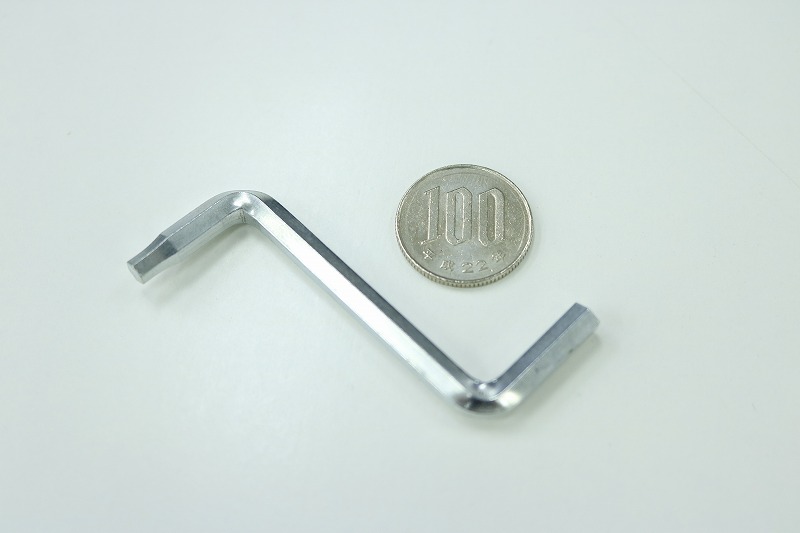 It is not so big in size, so you can put it in your tool set after installation or make minor adjustment on the way.
※The smartphone case of SP Connect is for iPhone. If you have an android phone, you can mount it with the attachment that comes with it.

Looking at it this way, there are only a few parts.
And by few, I mean ... easy to install!
Let's go install it now!

The wireless charging module will be explained as an optional part later, so stay tuned!

It's so easy to install!

I'm going to install it on my bike right away, but the important thing here is the mounting position of the phone. Because it's so compact, there's a chance that the phone could hit the tank or handlebars when you turn the handlebars if the mounting point is not correct.

Fortunately, my bike had a multi-purpose bar, so I will make use of this one.
First of all, I mock up the mounting points. It's not an exaggeration to say that 80% of the stylish is decided by mounting position.

Once the mounting point is decided, remove the clamp part and install the arm.
If you install the arm on the meter side, it will be difficult to turn on the key, so I installed it on the tank side. 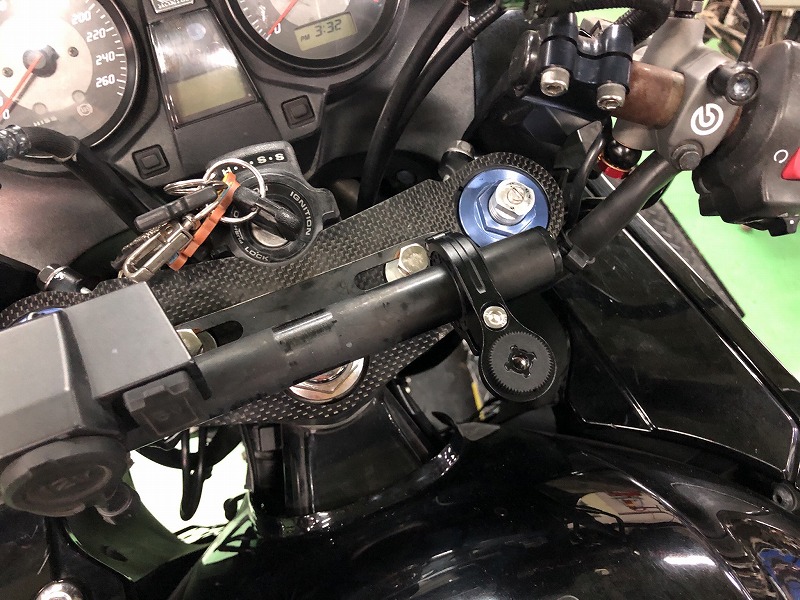 Next, the arm section is mounted, with small grooves carved into each joint to allow you to adjust the mounting at a fine angle. 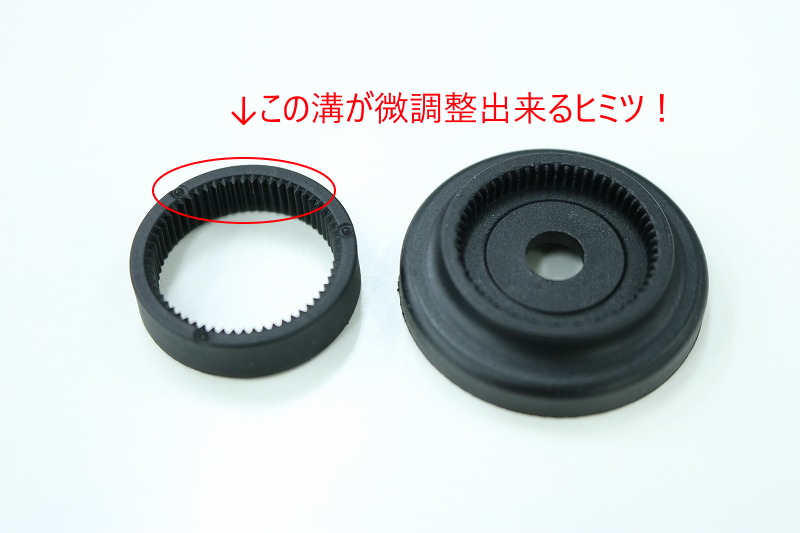 In this case, we wanted to mount the phone in the middle, so we're going to tilt it slightly to the left. At this point, the two protruding ends of the phone mount will be facing the phone, so you'll need to make some fine adjustments.

▼When you install it normally, you can't mount it in the middle, so you have to make some fine adjustment▼

▼You can't go wrong with the installation if you read the manual!▼ 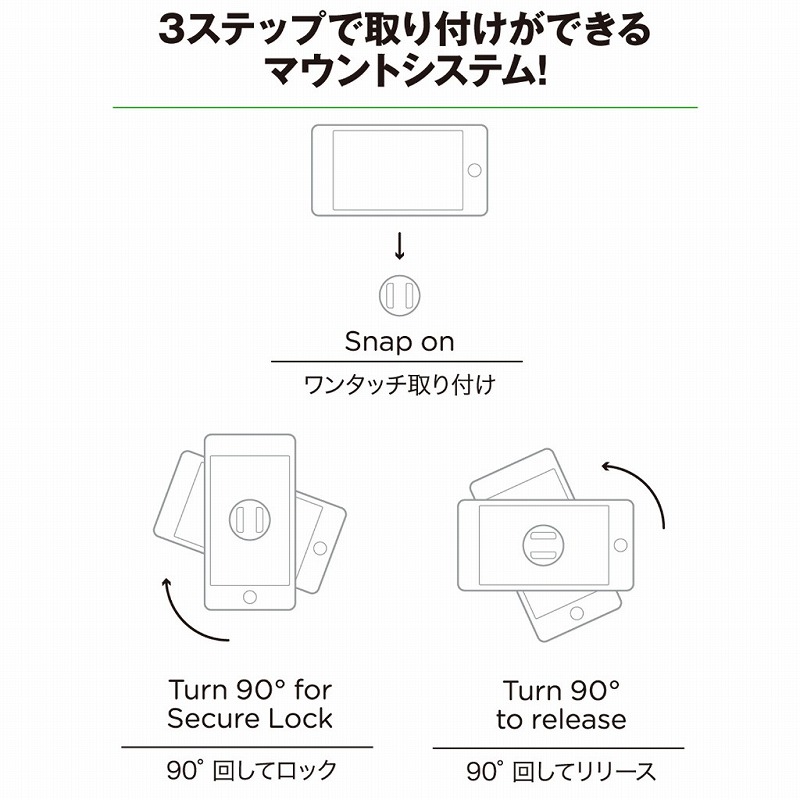 Once the adjustment is complete, all that's left to do is mount the phone and basically you're done...! However, we're going to additionally equip an extra wireless charging module this time.

The keyword for optional parts is wireless charging! 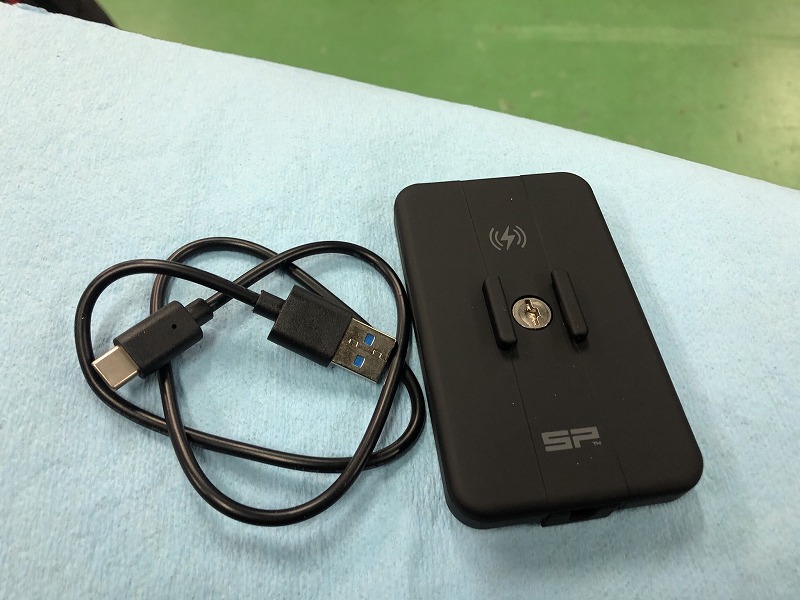 The wireless charging module that's been popping up a little bit earlier... what the hell is that? Some of you may have this confusion.
This is a revolutionary item that allows you to charge your mobile phone without having to connect it directly to a cable!
Installation is very easy. It's screwed to the smartphone mount part of the MOTO BUNDLE that I just installed and tighten it up with!

▼Align the grooves and tighten with a screwdriver! ▼

The module also has a protrusion on it, so you can use it with the case or smartphone attachment right away.
The wiring for the power supply, but I will just use my old use socket.

▼Just align the grooves and give a quick turn.▼ 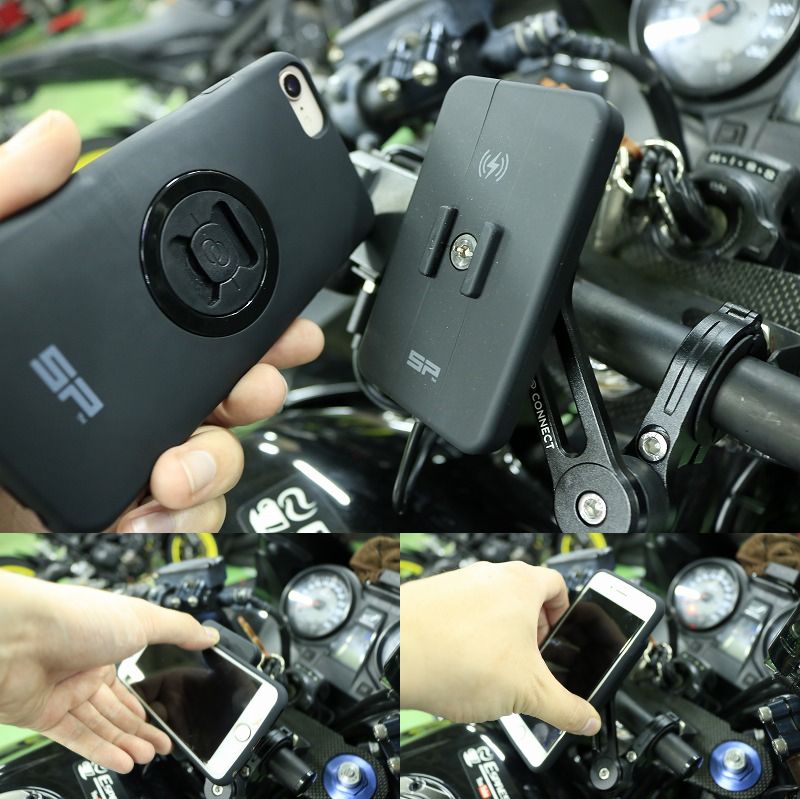 "There's nowhere to plug in the USB port! I don't want so much wiring tangling around!" We also have a cable that can be powered directly from the bike if that's your thing!

Click here for the charger itself and cable wireless charger

Well the installation was completed successfully. Install the phone and turn the key on...!

▼I was able to charge it wirelessly! ▼ 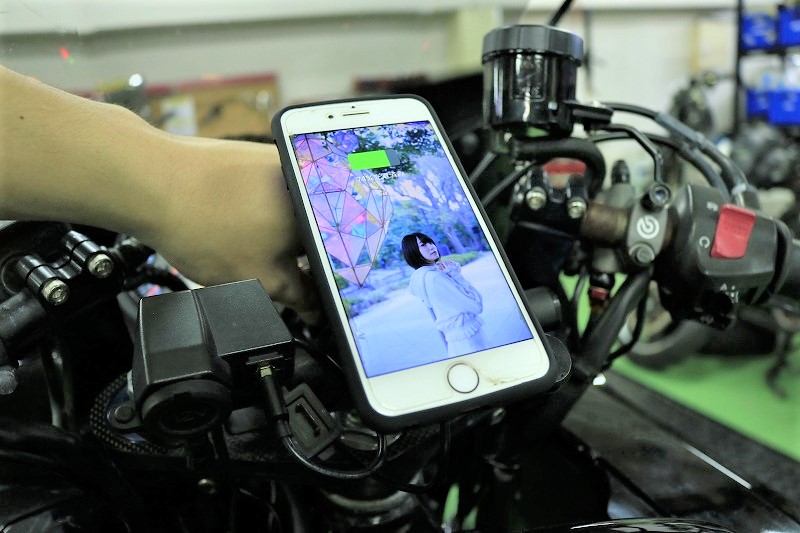 It's well charged!
Now let's take a look at some of the impressions I've had on my commute to work and touring.

I've used it on my commute and touring!

When I was commuting to work, there was a lot of starting and stopping, and there was quite a bit of shaking, but there was no sign of falling off, and I was able to see the navigation screen clearly because it didn't vibrate too much.
When stopping by a convenience store, it comes right off with a quick turn of the phone, so it was unnecessary to take off the gloves. 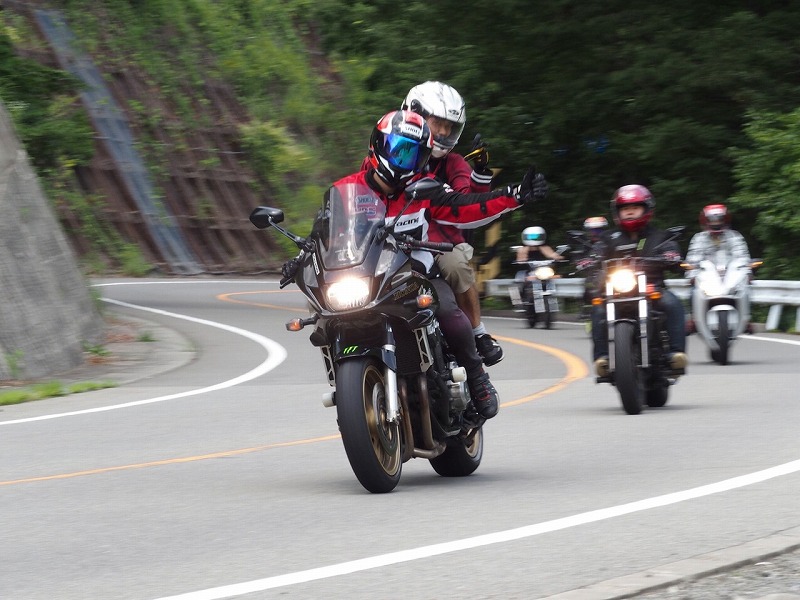 It's even more useful when touring. I faced a situation where it rained on the way to the touring site and I felt that I could quickly put the weather cover on without worrying about the charging cable and other wires, so I could take care of it in case of sudden rain.

We tested it out on a variety of surfaces, including highways, twisties, gravel roads, etc., and no matter what the conditions were, this mount grabbed my phone and wouldn't let go.

SP Connect is the most powerful smartphone mount!

It's sharp and organized, yet it can be charged and holds your phone securely. There has never been a mount that has been this well-designed.
If you are purchasing a new smartphone mount or replacing your current one, we'd love to have you consider buying this one. The combination of the MOTO BUNDLE and the wireless charging module is being considered. Why not give it a try?
I'm sure once you try it, you'll realize how good it is!

A simple and basic ignition system in the 1970s = how to maintain a contact breaker
“The T100 Bud Ekins Special Edition” Test ride review: a special T100 where you can re-experience the “Golden Age” of 60’s with this legend!