Home
Reviews
Motorcycle Reviews
CT125 Hunter Cub Test Ride Review: The Skillful Cub that Can be Ridden on Off-road and On-road with Vigor!
4/5 (10)

Honda's new CT125 Hunter Cub has been selling well since its launch in June. This is a report from the media test ride held at Twin Ring Motegi.

[Related News]
The MORIWAKI Monaka Exhaust System for the CT125 is Now Available!
The Modern Hunter Cub "CT125" Customised to Neo-Classic by DAYTONA
HUNTER CUB vs. CROSS CUB: What are their Attraction and Benefits?

Even more attractive as a leisure motorcycle 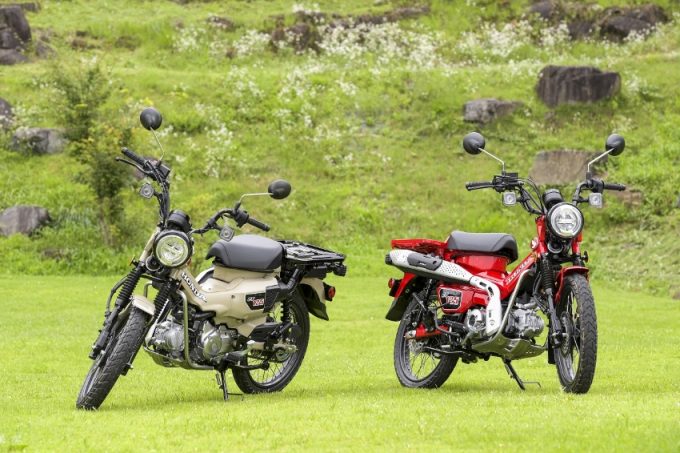 The new Hunter Cub, revived under its traditional name, is a "commuter that can be played with" that combines the ease and toughness of the Cub series with practical performance.

The new model brings to the fore its appeal as a leisure motorcycle that can be enjoyed in a wide range of applications, from everyday use such as commuting to work and school, to forest road touring and camping, taking advantage of its trekking performance and load capacity.

The base model is the previously debuted C125, but the frame has been redesigned with rough terrain riding in mind. In addition to the use of the same top bridge stem as on a regular motorcycle, the head pipe, pivot area, and rear frame have been reinforced, and the front and rear suspensions have been specially designed to ensure the lowest possible ground clearance.

It features heavy-duty construction with the Hunter Cub's iconic up-type exhaust system and under guard, and luxury equipment such as front and rear disc brakes with single-channel ABS. 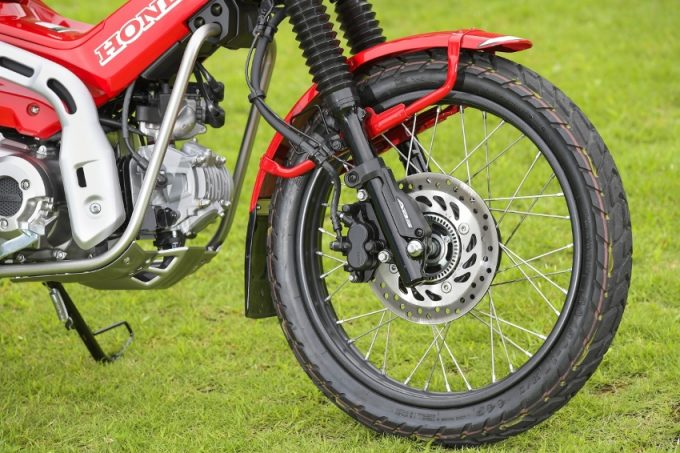 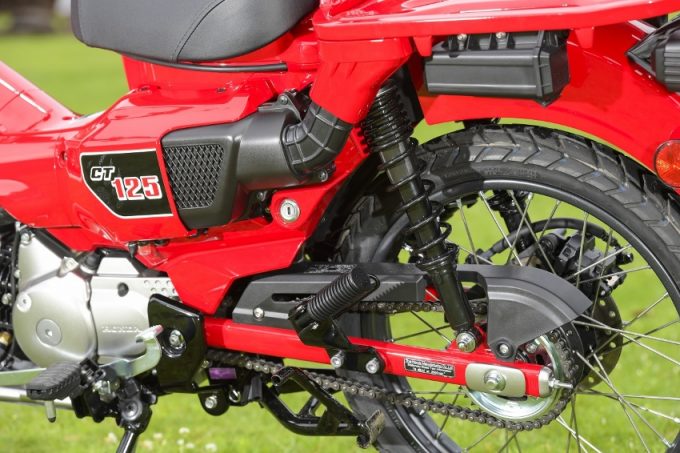 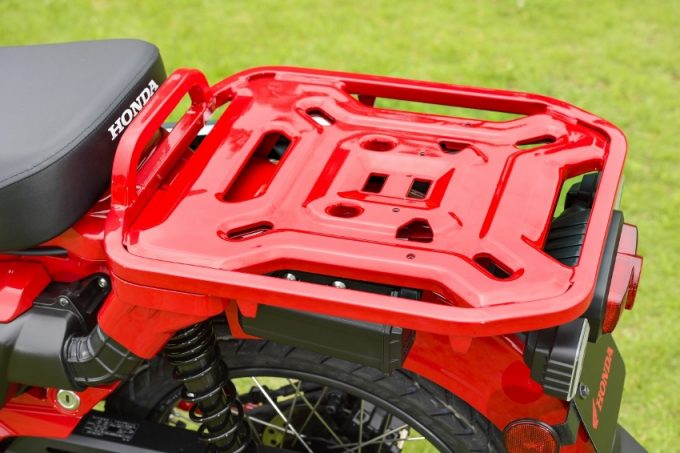 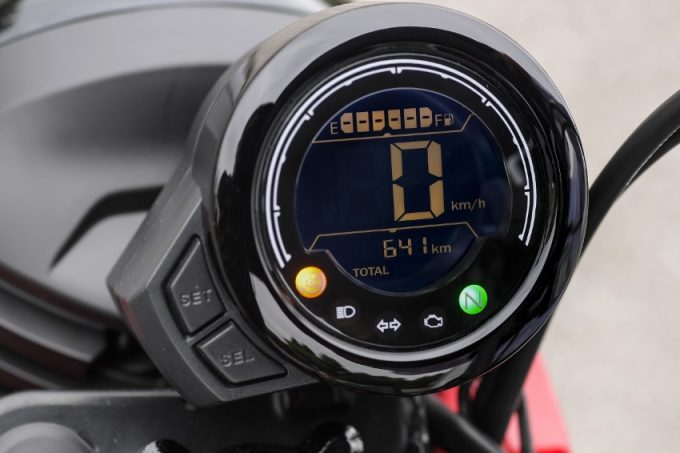 And yet, it also has a luxurious presence.

According to Honda's developers, it is a model that combines the appeal of a useful tool with a sense of luxury that gives it a presence that is second to none even when lined up next to big motorcycles. Well, compared to its little brother, the Cross Cub, it certainly has a luxurious feel. 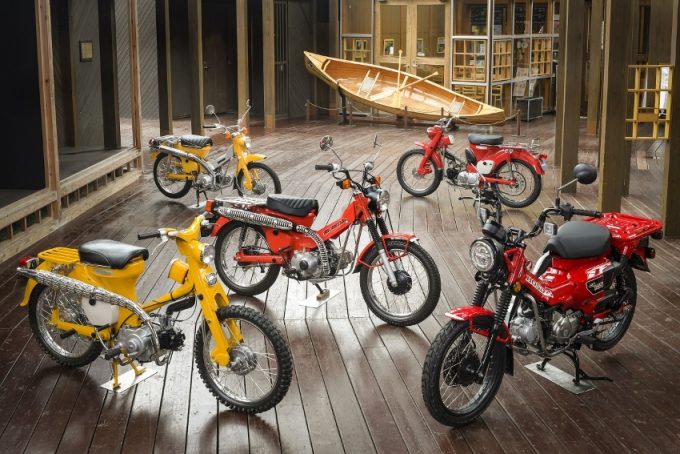 This is even more evident when you get on it. First of all, the seat and suspension are well cushioned and comfortable. The body also has a solid and rigid feel. The neck of the front end has been strengthened, so the motorcycle is very stable under hard braking and when turning corners. The sense of security of the vehicle is probably the best in the Cub series of all time.

The power to climb hills with ease 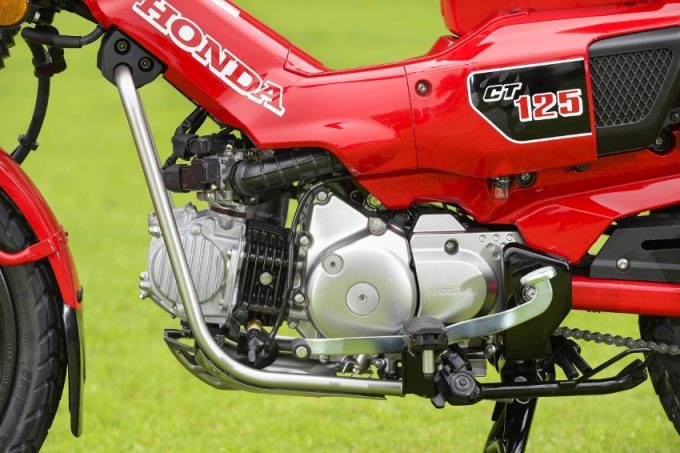 The air-cooled 4-stroke OHC single-cylinder 124cc engine is based on the Wave commuter for the Asian market, and is attractive for its tenacity at low speeds and rich torque at mid-range speeds. Like the other Cub series, the automatic centrifugal clutch and 4-speed rotary transmission take some getting used to at first, but once you get used to it, it's easy to operate and doesn't stall out, so it's safe and convenient.

The power to climb hills with ease is only possible in the 125cc class.

Sporty driving even on mountain passes 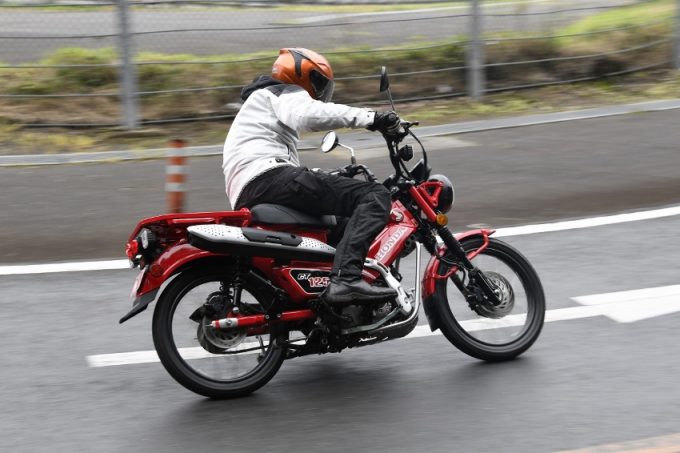 What surprised me was the high sports performance. The motorcycle is so stiff that it can corner with the same load as a normal motorcycle, and even hang off. It looks like it'll be great on the mountain roads.

Of course, the motorcycle's comfortable upright position makes it fun to pedal along while enjoying the feeling of the throbbing. The front and rear disc brakes have a sure touch, and although ABS is only available for the front wheels, the motorcycle stopped well even on wet roads.

Free to slide, great fun to play in the off-road!

Off-road track driving is the most fun! The dirt track course at Motegi was covered with lush weeds, but it was easy to play around with the powerslide, counter-crossing the turns with the rear wheel lightly flowing, or stepping into a little bumpy terrain while standing.

Seriously, the motorcycle's lightweight chassis and moderate engine power made it as easy to ride as any adventure motorcycle. 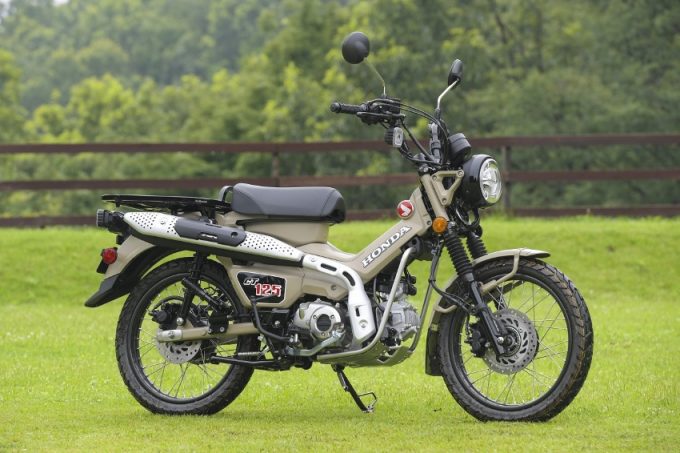 Although I didn't load it up with luggage this time, I felt the urge to load it up with camping gear and head out for some fun. With the optional rear seat, I can also enjoy pillion riding when touring, and I realized this is a skillful motorcycle to play with.