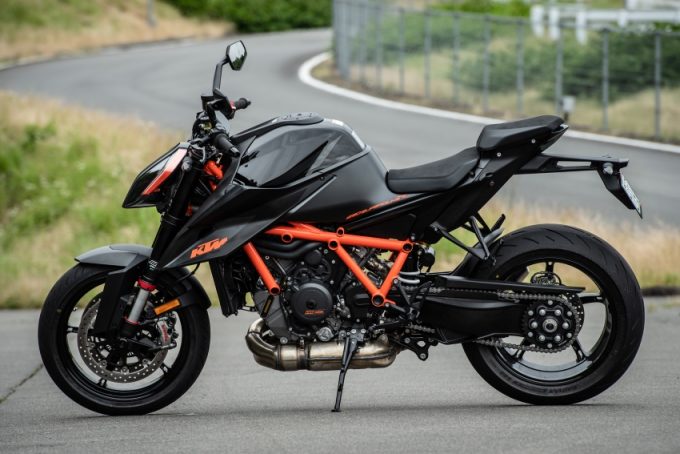 The liquid-cooled, 75-degree, V-twin, DOHC, 4-valve, 1301cc engine is based on the previous model, but the adoption of titanium valves and forged pistons, as well as the introduction of top injectors and a ram air system, has resulted in a 6ps increase in maximum output of 180ps over the previous model. The transmission and crankcase have been upgraded and the engine itself has been reduced in weight.

The frame has also been completely redesigned, with the 1290 Adventure series' tubular trellis frame being replaced with a tubular space frame that utilizes the engine as part of a rigid member, further increasing rigidity and reducing weight, resulting in a weight of 198kg that is 6kg less than the previous model. 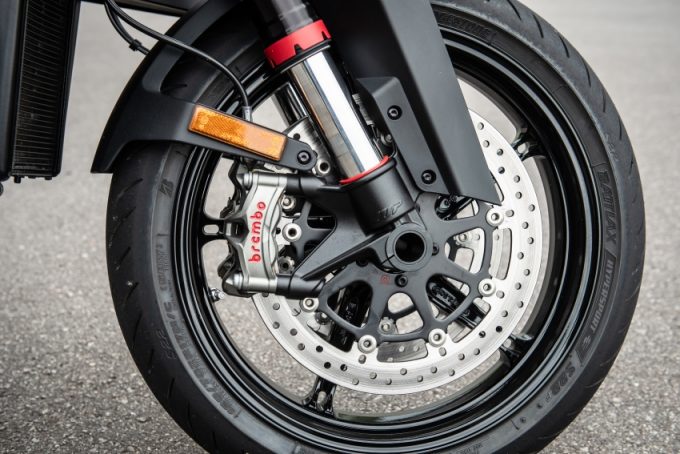 The electronic controls have been further refined, with 4 new riding modes (Rain, Street, Sport, and Track), and the interface has been updated with a new 5-inch TFT display and switches with a functional and stylish design. With the upgraded electronic controls, including cornering ABS with Super Moto Mode, MTC (Traction Control), MSR (Motor Slip Control), and Cruiser Control, make this a truly "mega-prime" fighter with the latest equipment.

Looks smarter and more refined
The new design of the front view, with a center duct in the middle of the LED headlights, is an eye-catching feature of the new Super Duke R, which is completely changed from the previous model. The body has been given a lowered, forward-leaning style. The slightly squat, motard-like image of previous models has been completely redesigned. It looks smarter and more refined version than its predecessor's massive, muscular design. 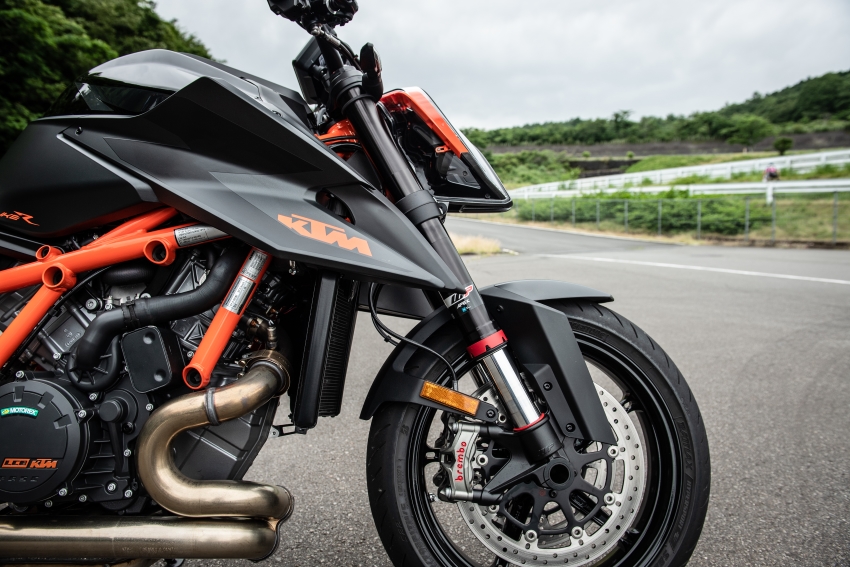 The riding quality is smooth. The clutch engagement is light, and the ride goes smoothly with just a touch of the left hand. It has a mild throbbing and little vibration, and the fact that the riding position is upright with the upper body elevated makes it even comfortable to flow through the streets normally.

The hard pounding and violent acceleration of the first generation have disappeared, and I wondered where the beast had gone. Thanks to improvements to the engine, including intake and exhaust systems, and electrical upgrades, it has become much easier to handle.

I have been trained but the nature of the beast remains the same.
Of course, this is just a matter of riding in a "normal" way. No matter how well trained you are, the nature of the beast remains the same. Once you twist the gas pedal hard enough, you will be hit by a furious acceleration of gravity, enough to make it hard for your reflexes to keep up. Riders must also switch between modes.
If you put it in the most aggressive track mode, it becomes an instantaneous transport device that takes on a different dimension from your everyday life, with its soaring V-twin sound. 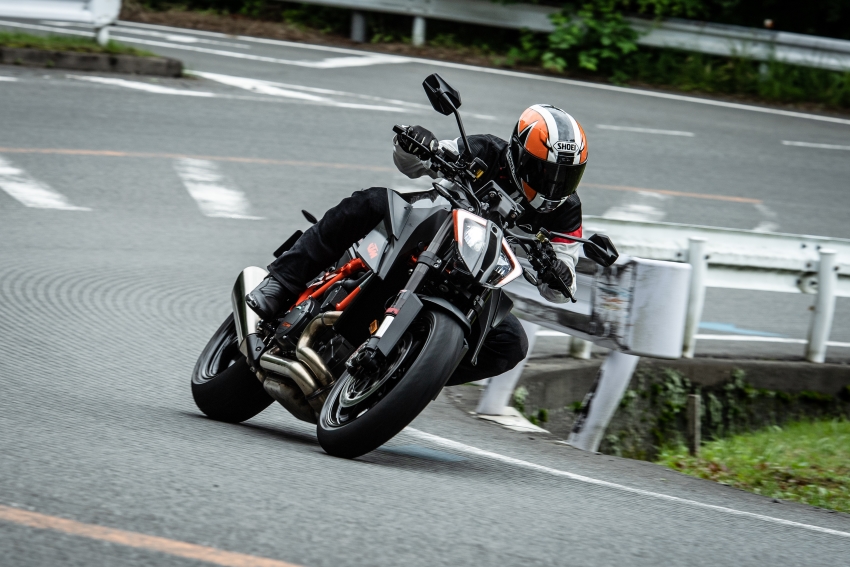 But what's amazing is that the electronic controls are constantly monitoring such conditions. I tried out the various ride modes in the safe place of the Fuji Speedway where the test ride was held, and in the gentlest mode (Rain), for example, the track-control system instantly intervenes to prevent wheelies or rear-wheel slippage, no matter how violent the accelerator is.

It keeps the beast firmly in the safety zone.

Get an on-road framework and take it to a new level.
The handling has also changed drastically. The mass is more concentrated around the engine, and the motions such as turning around the S curve and tilting into the corner are much lighter. According to KTM, the chassis is 3 times more rigid than before, but the actual ride feels softer.

The previous model had an image of wielding a large body, but the new model is more agile yet reassuring, with a more natural ride. 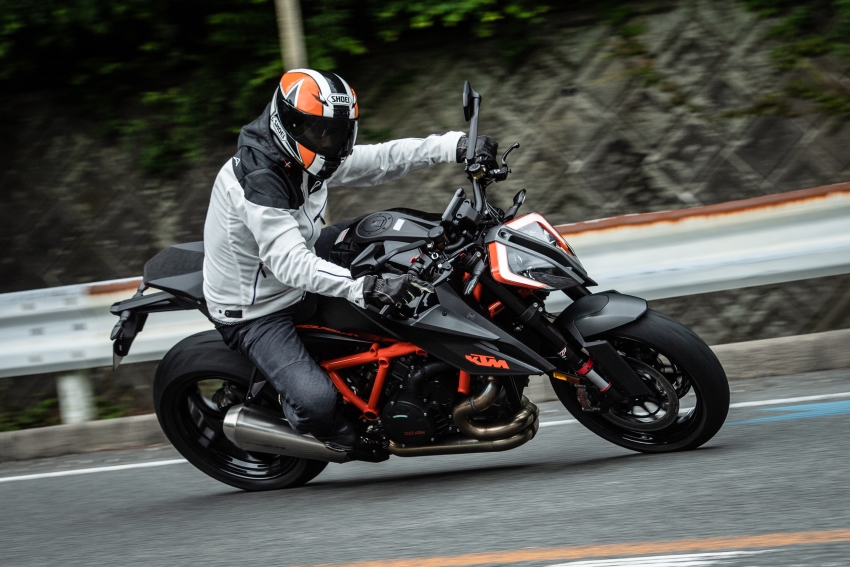 The hint to this seems to lie in the completely new frame construction. Until the previous generation, it used a 1290 Adventure-style steel-tube trellis frame.
The engine was literally made of steel pipes that were assembled in a yagura shape and then hung from the pipe, but the new model had a single structure that incorporated the engine as a rigid member within the same steel pipe frame, making it simple and compact. The engine is mounted at a higher position and the center of gravity is closer to the roll axis than on the previous model.

What's more, the frame design is similar to the only supersport RC8 that was once in the line-up. In other words, it's finally broken free from its long-standing off-road curse and has climbed the ladder to become a fully on-road-facing model.

An open-top supercar, for instance.
The latest electronic controls further solidify the beast's foot grounding. Not to mention the cornering ABS and MTC (Traction Control) that support the cornering, the MSC (Motorcycle Stability Control) including the MSR, also known as the Traction Control on the deceleration side (to prevent rear-wheel slip due to excessive engine braking), provides fully integrated control of the machine's behavior.

In addition, the smooth control of the quick shifter that supports upshifting and downshifting is pleasant. The newly designed paddle-type switches are also modest and easy to use. The new TFT display with a neat and compact layout will make you feel stylish.

These electronic devices are like a behind-the-scenes force supporting the rides of the riders. You can ride without electronic control, but it's better to have it. It's an essential piece of equipment, especially if you want to safely enjoy the performance of a super-duper-class machine like the 1290 Super Duke R. Moreover, the better the use of electronic devices, the better and smoother the ride is. If you compare the 1290 Super Duke R to 4-wheels, it's like an open-top supercar.

I highly recommend it to anyone who wants to experience the cutting edge of KTM's MotoGP-recognized reputation, or who wants to challenge the full-cowl SS in a naked race. 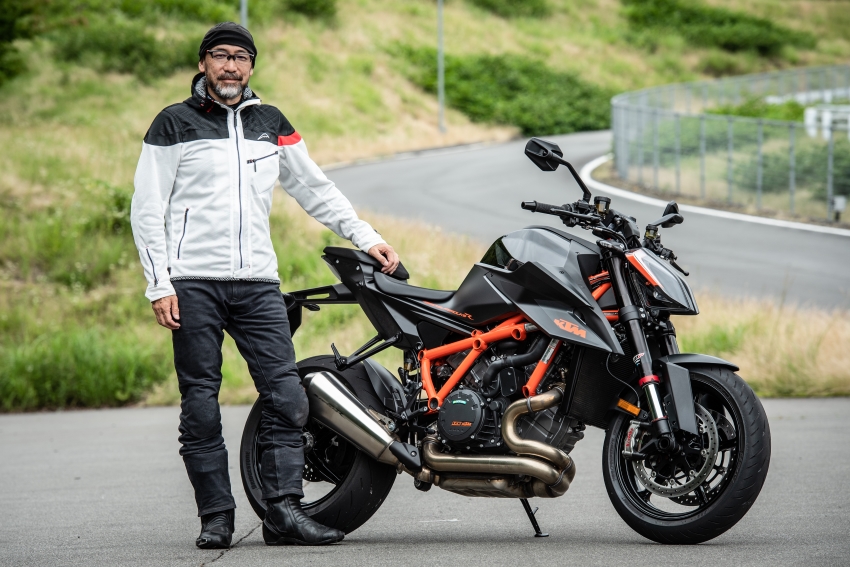 We tested this single sided dry bag and it's now o

The new Triumph Tiger 850 is coming up! The triple

We've been hearing the rumors about the Honda Rebe

Does anybody remember this classic supersport bike

Coming up the BLACK FRIDAY SALE, we have selected

Fall is a great season for mortorcycle riding in J

Black Friday and Cyber Monday deals are coming up!

Hope you had a lot of ride & rest during the weeke

He is still my hero. Next year!! #webike #webikeg

The new Tiger 900 has a whole different ignition s