We will introduce Mr. Satopon's passionate story about his riding experience with his beloved motorcycle, CRF1100L Africa Twin, from Webike community "My Beloved Moto" campaign.

He shared with us the advantages and disadvantages review of the Africa Twin, which he knows well because he's the owner.

On my 16th birthday, I got my moped license and acquired regular and large motorcycles license at the test site. I have been riding motorcycles for 22 years up to now and have ridden about 20 motorcycles. I currently have 4 motorcycles, the CRF1100L Africa Twin Adventure Sport ES, 2 MONKEYS and a SUPER CUB 110.

What motivated me to buy the Africa Twin is that the GSX-S1000F that I had been riding before was going to change its vehicle inspection and while it was approaching I went to a motorycle shop to have a look at the Africa Twin that had undergone a model change and bought it without a second thought. It's been three months since the motorcycle was delivered, and it is mainly used for touring, forest road touring, and long distance touring.

・For applications
It's named as an adventure sport, so it's versatile enough to handle everything from city streets to winding, unpaved forest roads. You can drive around for a day with lots of fuel and a full tank. You can also carry a lot of luggage if you want to. If you connect it to the iPhone, you can use the navigation system on the display.

・For riding performance
The electronic suspension allows you to change settings at the touch of a button and you can switch from on-road to off-road while straddling. You can enjoy 7 levels of traction control and rear ABS cancellation to suit your style. The visor makes it comfortable on the highway. Cruise control is also useful.

・For appearance
The CRF1000L is big, but it's small enough to turn around and fairly stable at low speeds and doesn't feel heavy at all. The foot grounding is pretty good and I'm happy with the higher height model. Thanks to the good foot grounding, I can stand even if I lose my balance on a forest road. The gauges are color LCD, just like the modern motorcycles. The lights are LED and the headlights are kind of cute. 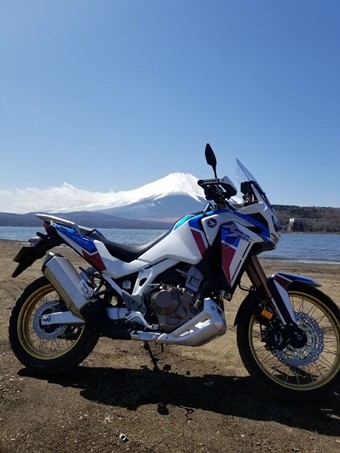 It's big and cool.

・For applications
The best part is, it's pricy! Maybe it's cheap considering the equipment and such, but it's still expensive. Options are also expensive. There is no cargo hook on the carrier or body. It might be good if I put a pannier case on it, but I can't afford it if I buy the body.

・For riding performance
When I was on a bad road, a big motorcycle is heavy as expected. Although the large visor has a high wind protection effect, it goes into the field of view, and it is anxious until it gets used to it. I want a short visor.

・For appearance
There's nothing in particular. 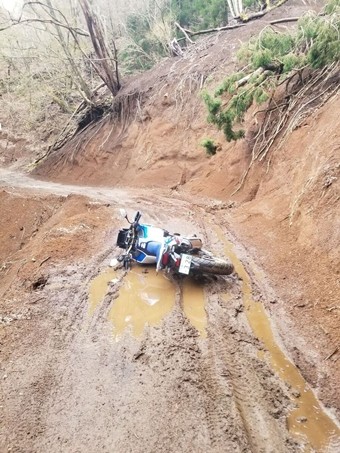 The weight can be a problem on bad roads...

I've always wanted to ride an adventure bike someday, but I decided to ride it ahead than I planned. And I have no regrets on buying it. I thought of having a foreign motorcycle and other international manufacturers, but I chose the Africa twin for the forest road and touring. I don't know why I chose it and I haven't compared it with other motorcycles. However, I'm still glad I bought it.

I was planning to go touring in various places until this situation. It's very unfortunate, but I still want to enjoy it.

Thank you, Satopon, for sharing the story of your beloved CRF1100L Africa Twin. Thanks a lot!

Our 8 best bike protectors! I had an accident, so I picked it for myself.
KAWASAKI NINJA H2 Story “Changing Forward” Motorcycle Version [Video]