Home
Reviews
Motorcycle Reviews
[Tricity 155 Test Ride Impressions] If you’re going to be riding your bike to work and school, we recommend the Tricity for stability!
3.5/5 (2)

We'll be bringing you an impression of the superb stability of the Tricity 155 on a 40km round trip commute.
As it turns out, this was one for those not used to commuting by bike!

Actually, it's not as big as it sounds. 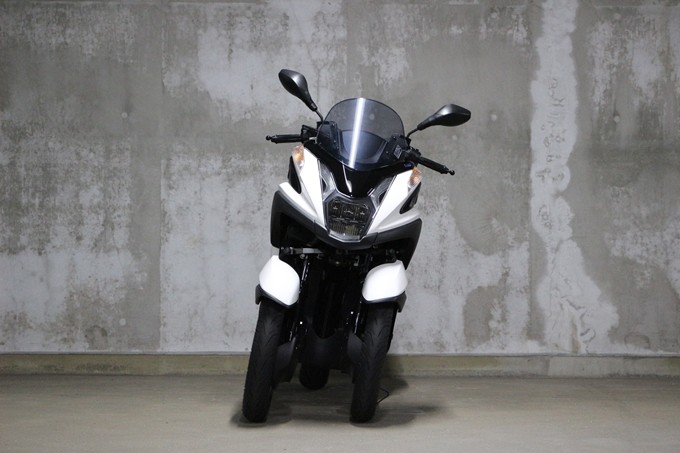 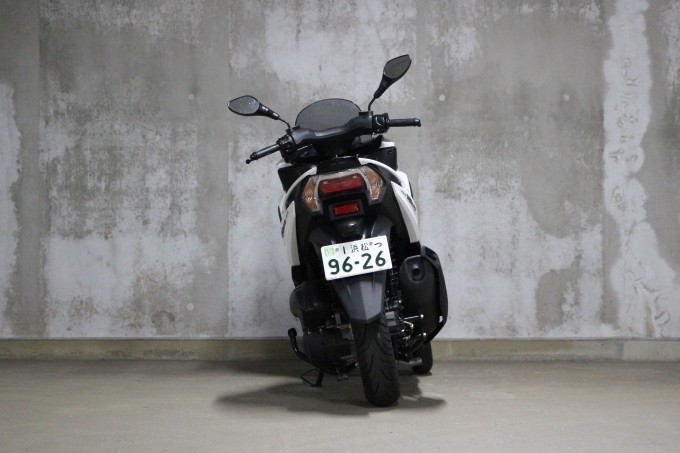 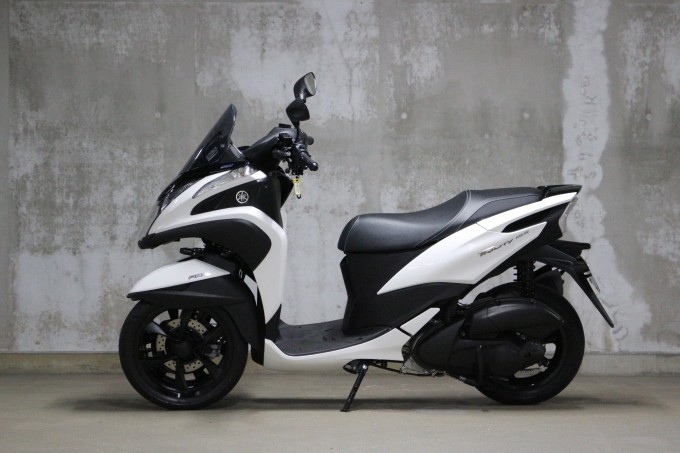 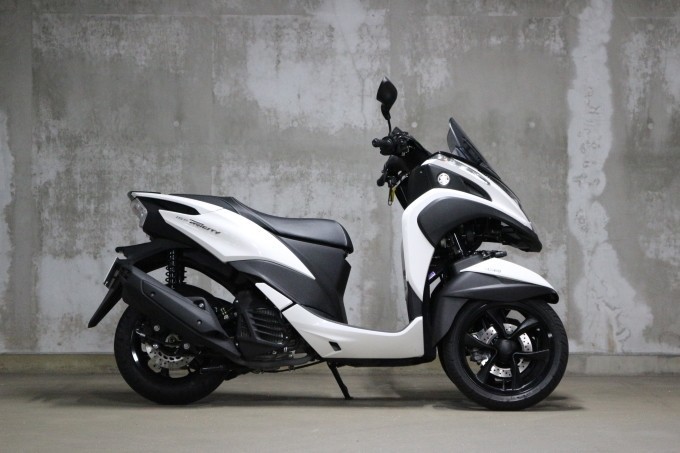 The Tricity 155 with LMW (leaning multi-wheel) is a front two-wheeled The style gives it the impression of being "bigger" than the same displacement range.
However, the actual width of the bike is only 750mm, compared to the PCX150's 745mm. It's much the same as the previous model. Even though it is the front two wheels, the wheels are within the width of the handlebars, so rinding in tight spaces is not a problem. I didn't feel it.

The LMW mechanism is structurally heavy in part because of the structure, but the 165kg vehicle weight actually pushes and pulls You will feel the weight when you try it. There is no problem to push on a flat road, but when it becomes an uphill, even if the slope is gentle, it is difficult to push and walk. It is not easy.
However, the weight of the 155cc bike is not easy to drive on highways, so it is not easy to rinde on highways. It's not so much a disadvantage as a disadvantage for those who want to drive on the road as well.

It's often misunderstood, but although it's a 3-wheeled bike, it won't stand upright due to the sinking effect of the suspension. Just be careful not to forget to put the stand on when you get off the bike!

About the seat height 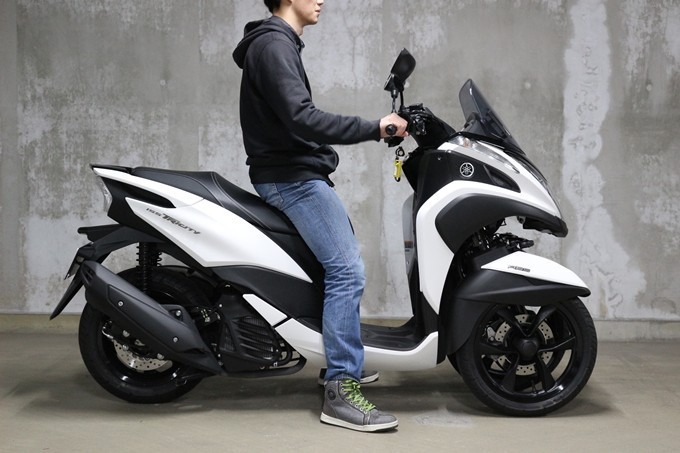 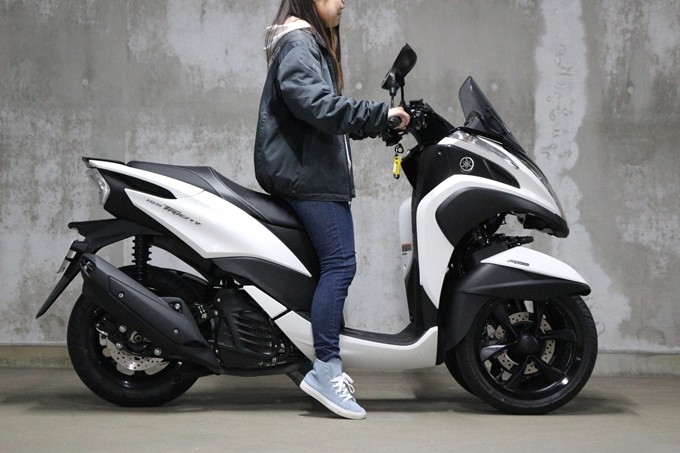 The seat height itself isn't very high, but the stepboard is wide enough to accommodate the two front wheels.
At 173cm tall, both feet were firmly on the ground and I had no complaints about my footing, but at 155cm tall, I sat at the front of the seat and both toes were on the front of the seat.

I actually got to experience the front two wheels!

This time, I drove every day for a week on the main roads in Tokyo, mainly on commuter roads (flat roads). It was. I also tried out the bumps and highways that I was worried about, so I'd like to play along with them.

Honestly, as long as you're driving in a straight line, you're not going to get the "two tires on the front" feeling. I didn't feel it that much. However, when I drove over rough terrain, such as ruts, the handlebars felt much better than with the front single wheel. It was a strange ride, in a good way, without being taken down or vibrating too much.

What was even stranger was the cornering. When I tried to turn, it was so stable that I felt as if I could take it down as far as I could. Anyway, the front end feels so grounded! Be careful not to get too carried away with the stability and knock it down too much, as it will rub the center stand. Lane changes and corner behavior are the same for the front one wheel, but it's still light in comparison. You may feel like you're missing out.
This is the part where you have to prioritize the peace of mind of "not falling down.

If you use it to commute to work, fuel efficiency is a concern along with driving. The road I took this time is crowded in the morning because of rush hour and there is a lot of stop-and-go traffic, and at night, there is a relatively slow flow of traffic. It will be about 40km round trip on smooth roads. The actual fuel consumption is about 40km/liter under these usage conditions, which is passable for a commuter bike.

The top speed of the Tricity 155 is about 110 km/h. Comfortable cruising is around 80 to 90km/h, so you can drive on city highways with no problems, but On a typical highway, you'll be driving mainly on the left-hand side of the driving strip.
The top speed is modest, but its stability is unmatched by those in its class, especially in crosswinds, so it was not too disruptive when being passed by a truck.
However, the impact is relatively large due to the two wheels going straight into the seams of the road surface. The handlebars are rubber-mounted, but you might want to add bar weights to them. 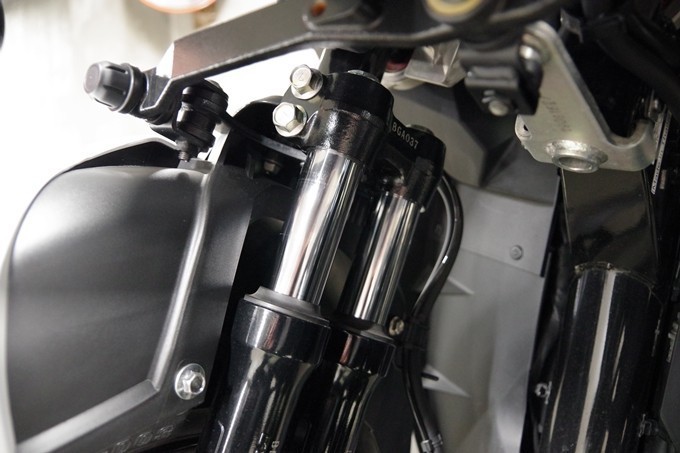 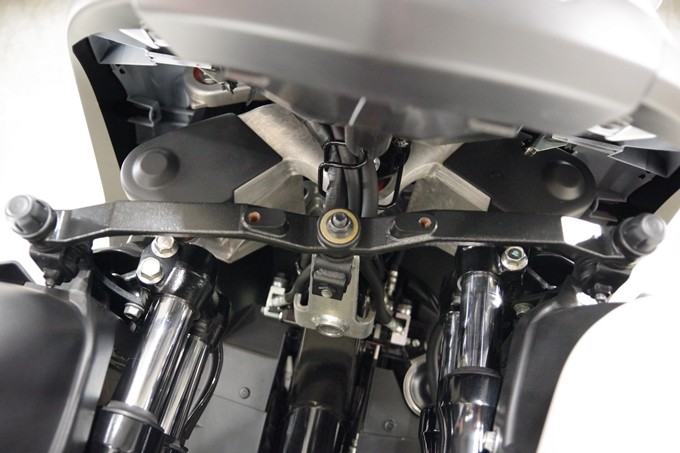 Speaking of Tricity, it's still these front two wheels! There are a total of four front forks, two on each side. This seems to be an essential part of the LMW mechanism as well as playing a role in shock absorption, etc.
This one made me feel self-conscious, but I didn't feel any discomfort when pushing or pulling. It feels the same as a normal scooter. However, the front 2 wheels have a big influence on the feeling of "heavy" which I wrote in the beginning. I'm sure. 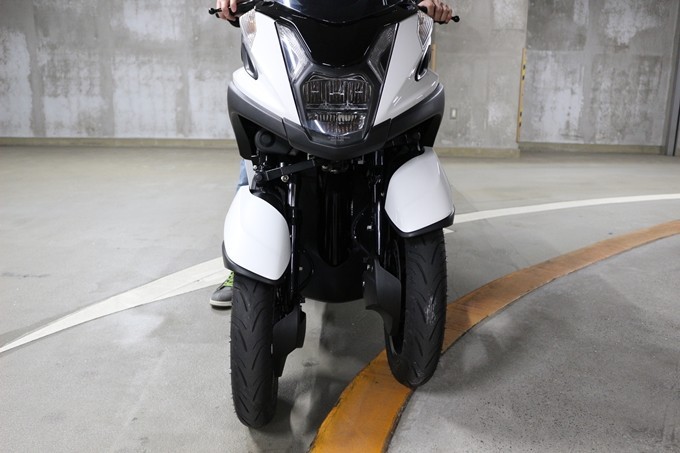 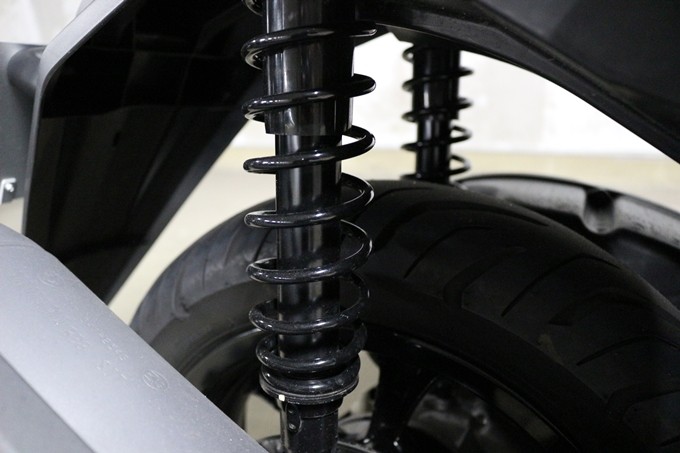 The benefits of the front two wheels are likely to be felt when driving on unstable surfaces and bumps. 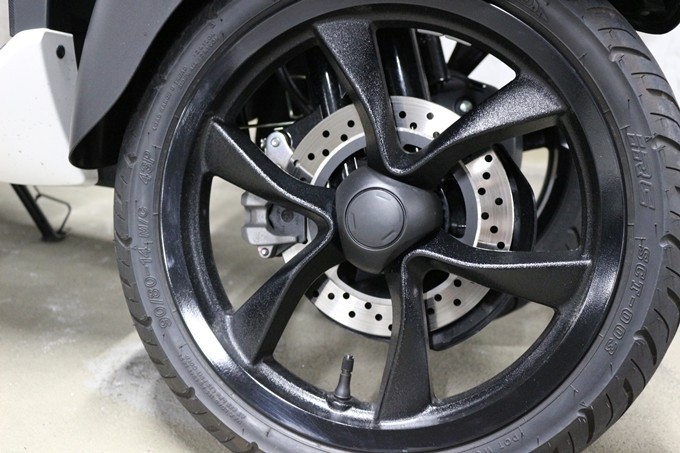 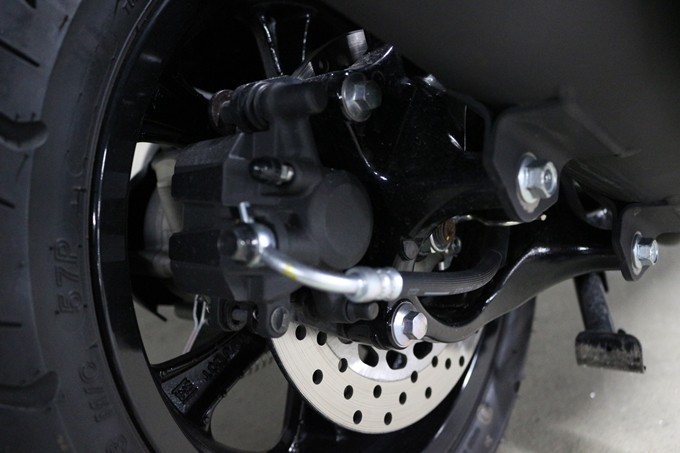 Forks, calipers, discs, etc. are all on the inside of the two tires for easy maintenance. Honestly, it's not that good. It's better to leave it to the shop without pressure.
Also, the Tricity 155 has combination brakes (Unified). The front brake is linked to the rear brake when the rear brake is depressed. However, it only serves as a brake aid, so you should hold both the front and rear brakes to help the driver's brake. The awareness of applying the brakes is the same as in other bikes. 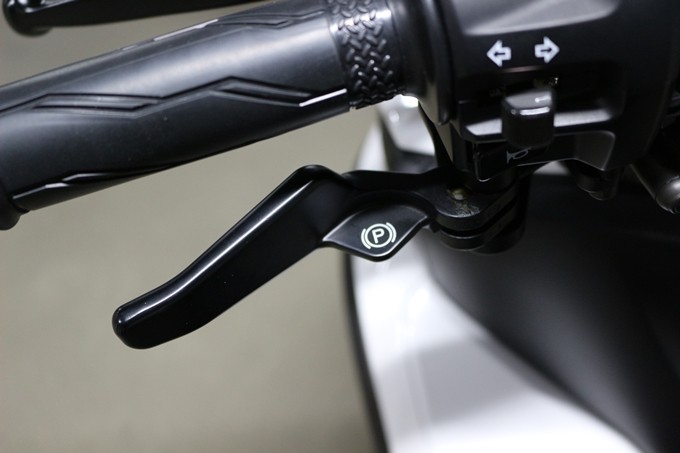 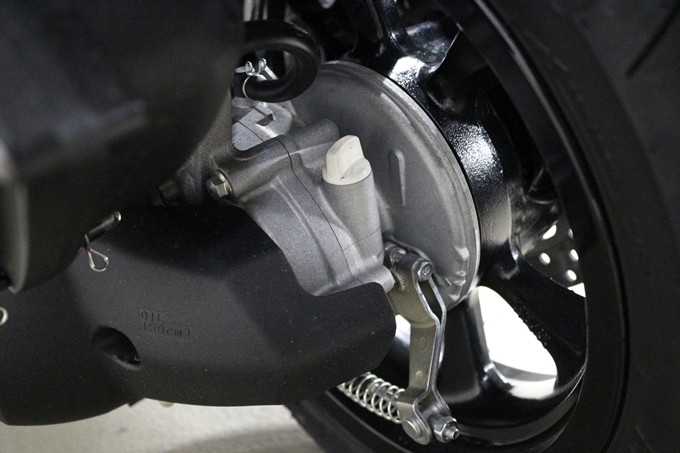 The left-hand drive is equipped with a parking brake, so you can park on hills and at highway toll booths. This is very useful when you have to stop for a while in a situation such as Pulling the lever toward you activates the brake, and to release it, simply return it to the original position.

Equipment for everything from city driving to touring 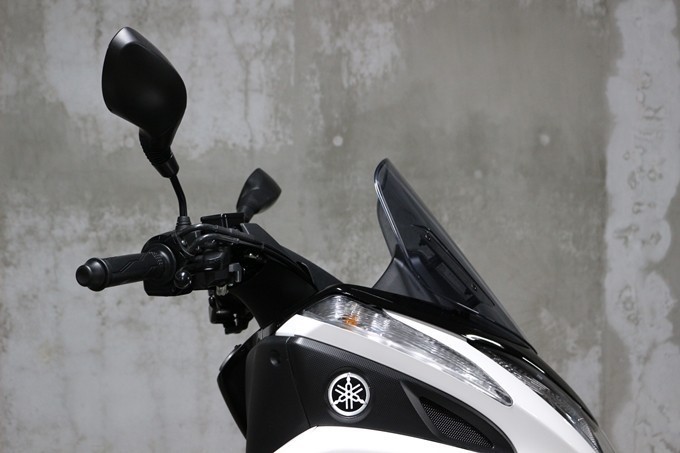 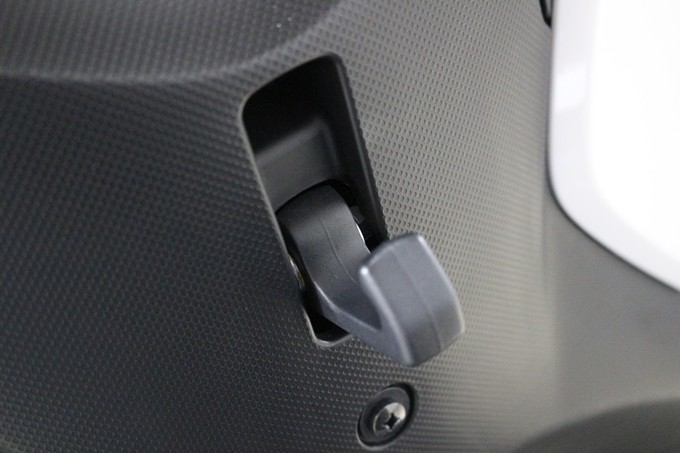 The screen is at a good breeze height when driving around town, but at high speeds, the I would like to see a little more height. This area can be replaced with aftermarket parts to suit your use and preferences.
The center of the inner panel has a convenience store hook. It seems to be useful to hang some shopping bags on it. 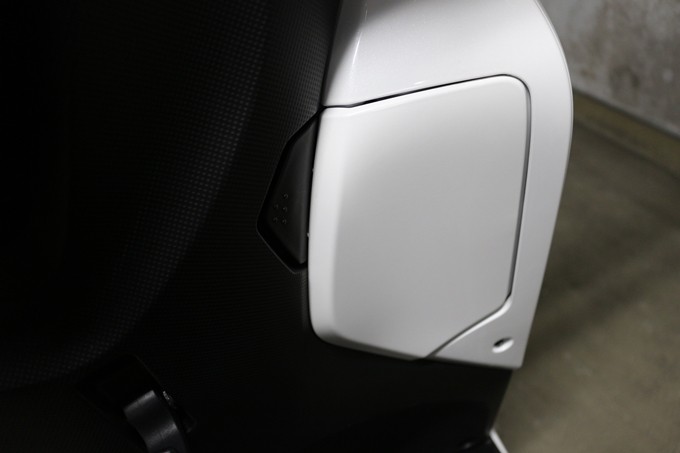 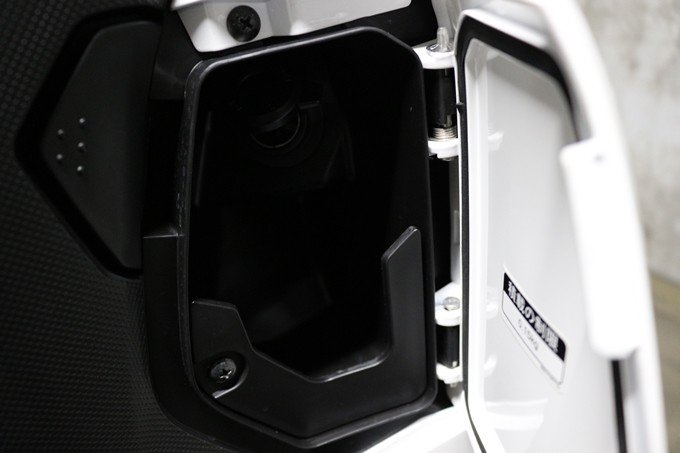 Large capacity space under the seat for easy storage 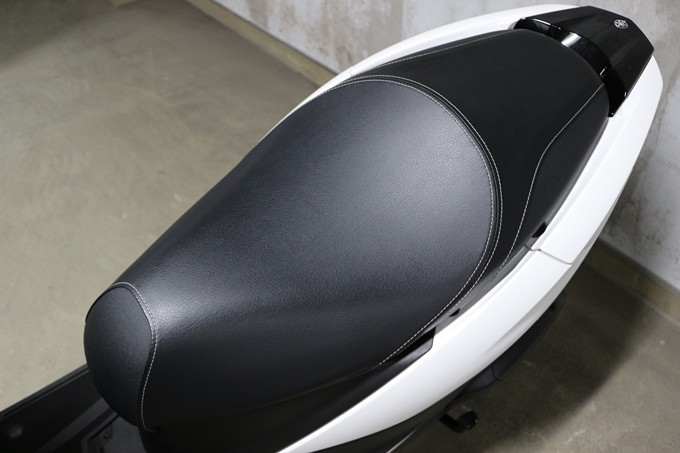 The seat has a good amount of cushioning and is very comfortable to sit on. The seat is wide and flat, which makes it feel stable and will allow you to ride without fatigue. The tandem side of the seat is quite comfortable as well.
The tandem seat is elevated so you have a good view of the road ahead.
It is built to eliminate the fear of driving in many ways, and it looks like you can enjoy tandem touring as well. 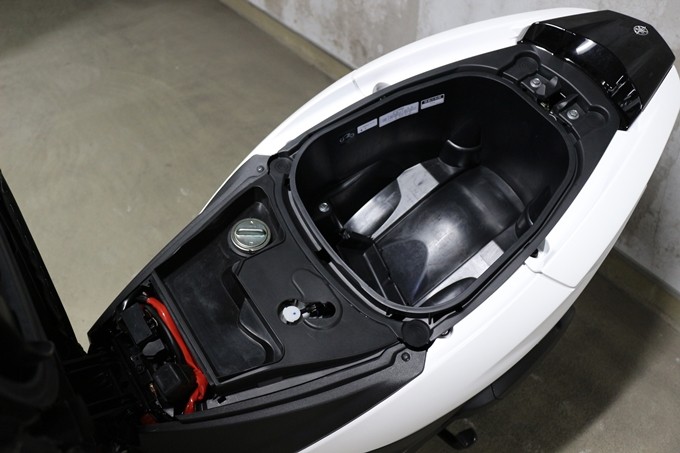 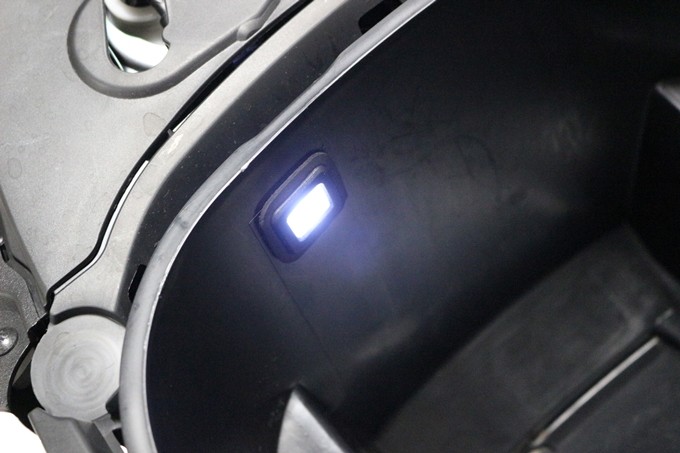 The storage capacity under the seat is about 23.5 liters, which is larger than the Tricity 125. By the way, it is about 3.5 liters larger than the Tricity 125, which makes it easier to put in and out of luggage at night. It has helpful LED lighting. I've been able to fit a full-face helmet (size L) and an off-road helmet with no problem. I can store larger shopping bags with ease.
Just be careful not to push the seat closed until you hear a firm "click" or the LED lights will stay on and cause the battery to run out. 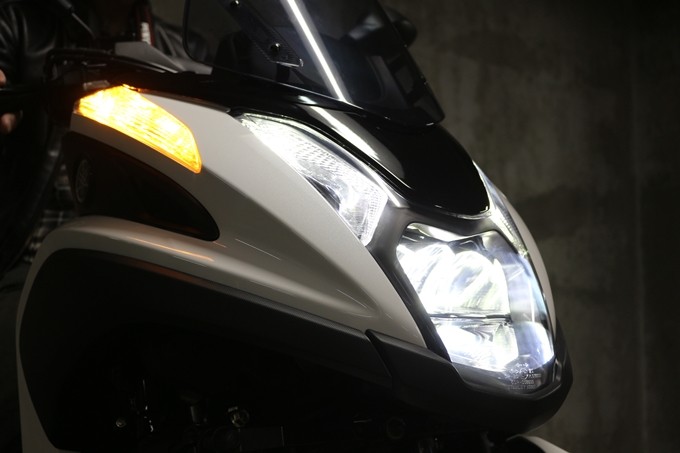 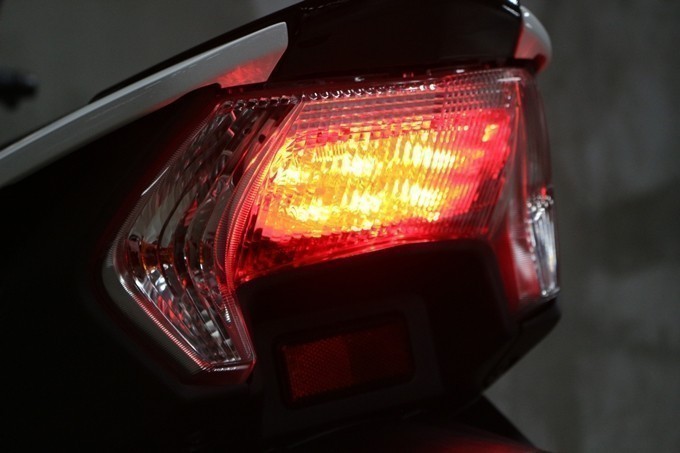 The headlights have a sharp design with both high and low LEDs. They match the sleek form and look great!
They are very bright when lit, so visibility at night is perfect. You can also benefit from the safety benefits of LEDs as they are appealing enough to other vehicles. If you need to, you could change your blinkers to LED as well to make them look a lot better! 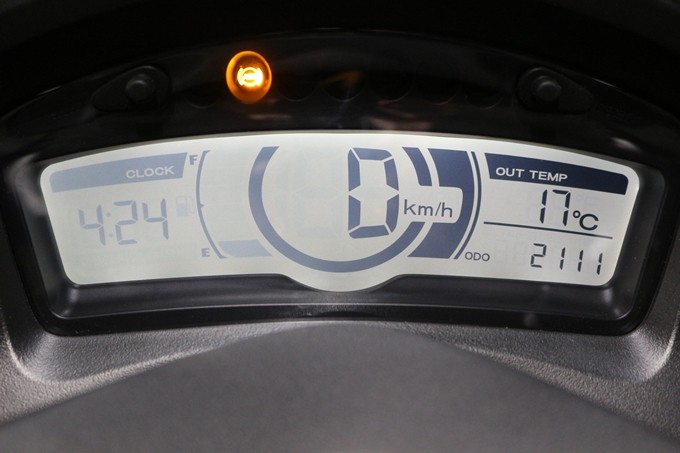 The gauges are all digital. It is good that the speed display is large and easy to read.
In addition, various displays of "clock, fuel system, outside temperature, trip 1/2, and odo" are set up. . I think it's sufficient for the function of the scooter.

Oil and belt change times can be managed separately from the trip meter, so you can keep track of maintenance timing.

What did you think? The Tricity 155 has been widely used in daily life and for touring on the highway. Even if you don't ride your bike to work very often, Tricity allows you to get to work comfortably and with less fear of falling over. I think.
Furthermore, the 155cc can also run on the highway, so it's attractive that one vehicle can cover a wide range of uses.