What is your reaction when you hear about overseas motorcycles? I think that each person has his/her thoughts, such as "cheap", "only motorcycle models that I don't know something about", and "likely to break". It's very unsettling, especially when you don't know what you're getting until you've bought it. Hoping to be a reference for such riders, I went to the touring comparing the overseas motorcycle with 5 Webike staff!! I'll tell you how it is!

Introducing the 5 motorcycles that participated in this article. 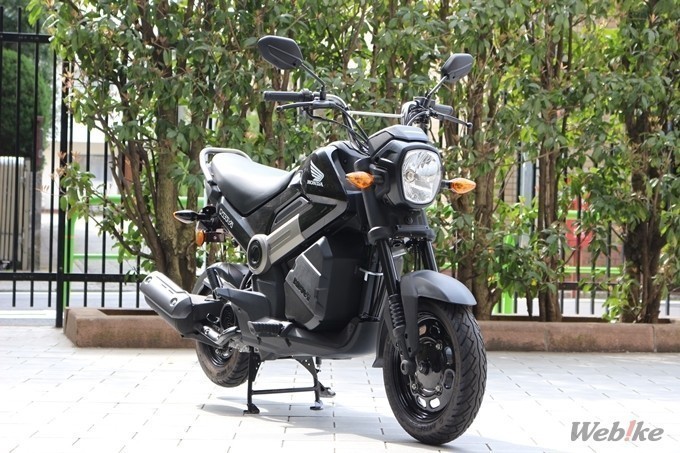 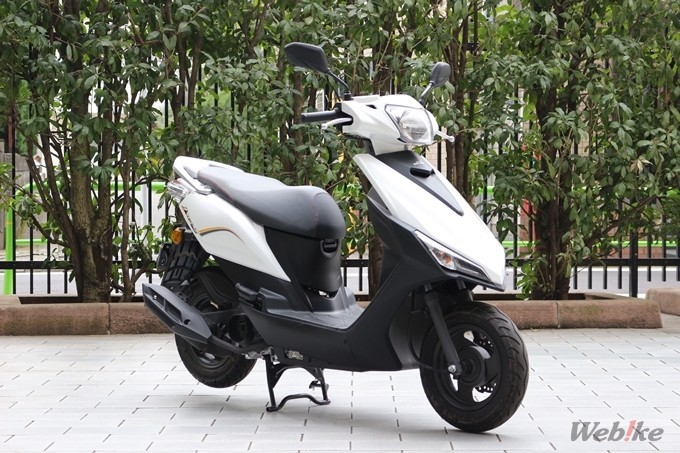 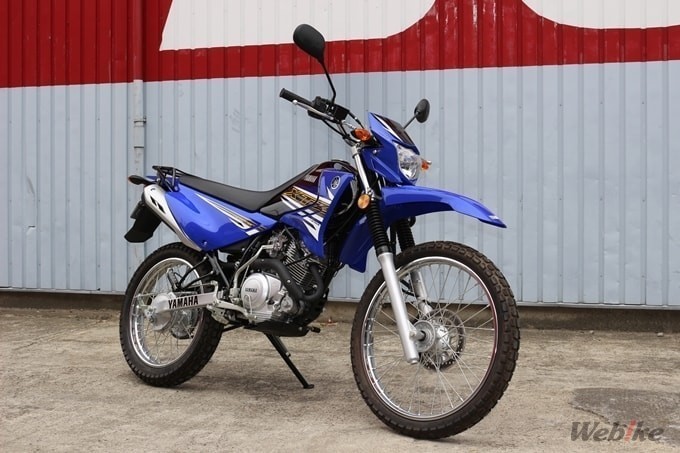 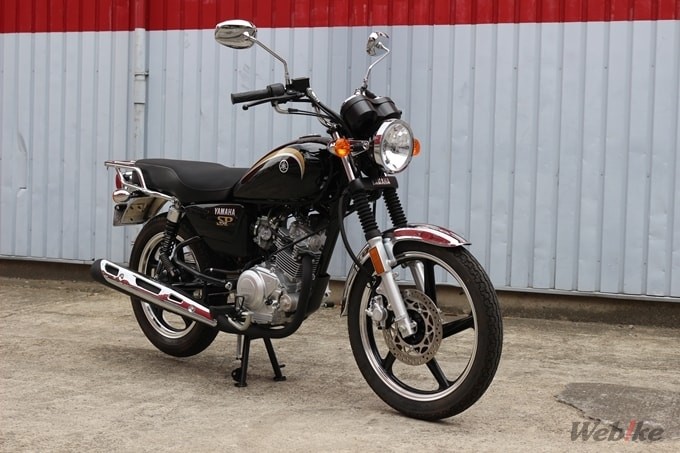 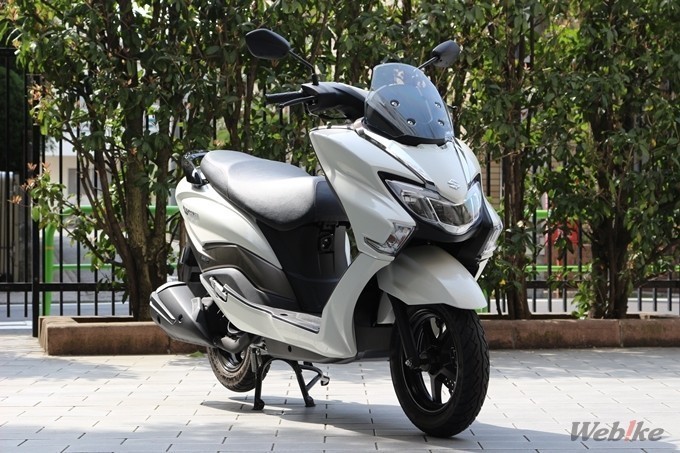 We're leaving from someplace in Tokyo!

We gathered at the Webike headquarters and do a simple motorcycle check and start! (The accompanying motorcycle in charge of photography is also accompanied) It is a very short touring that we will ride to Odaiba after we stop by Tsukiji (lol). I was eager to ride about 100km, but it was rejected by a majority decision.

I ride on a motorcycle that I don't normally ride, so at the time of departure, it's all about raising the tension. 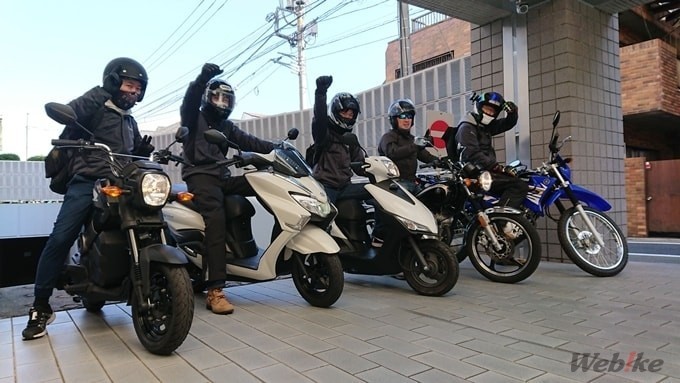 First of all, I'll try to ride leisurely towards Tsukiji.

Certainly, it is a complete downhill road touring, so I'll aim my destination without hurrying. This class is good because it is not sudden in the feeling. The pace which slowly matches the flow of surroundings just feels good.

▲ Still in good spirits and having fun! 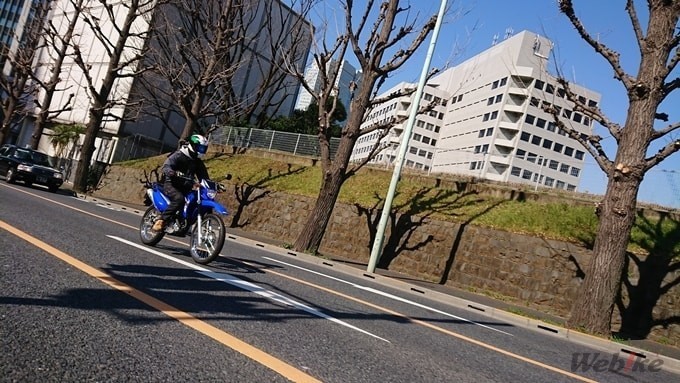 I was riding the YAMAHA XTZ125 in the early stages of the ride, and because it's a full-size motorcycle, it's very easy to get into a good posture and position while riding. It was relatively comfortable because there is a common in scooters and the body does not end up shrinking. However, like the previous ride, I felt that "it is a bit painful if I do not shift up from the start on the early ride." The motorcycle body is big, but it doesn't have enough power, so most comfortable to shed at about 60km/h after all.

Every time I wait on the traffic light signal, I exchange a few words about the feeling of the motorcycle I am riding. 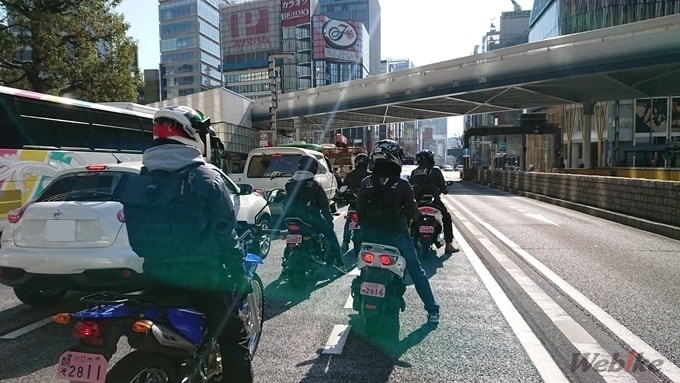 The first destination is the Tsukiji Hongwanji Temple!

We arrived at Tsukiji Hongwanji Temple while talking about this and that matter. I've been living in the Kanto area for more than 10 years, but this is actually my first time here. It's a breathtaking sight.

With permission, we lined up at the edge of the parking lot and took a commemorative photo! 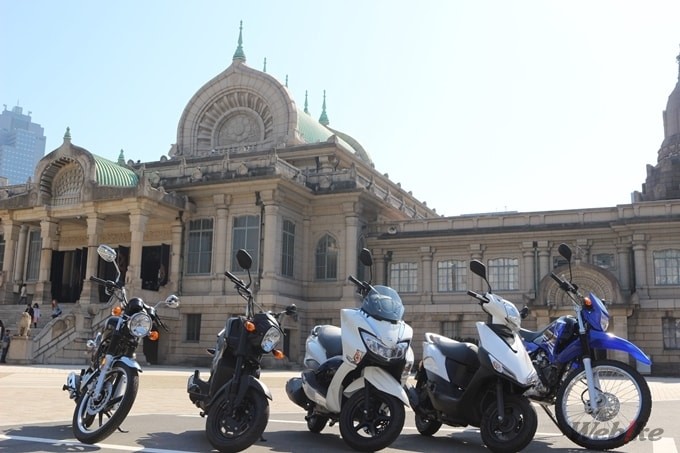 After that, the other riders wandering around to find a place for breakfast. 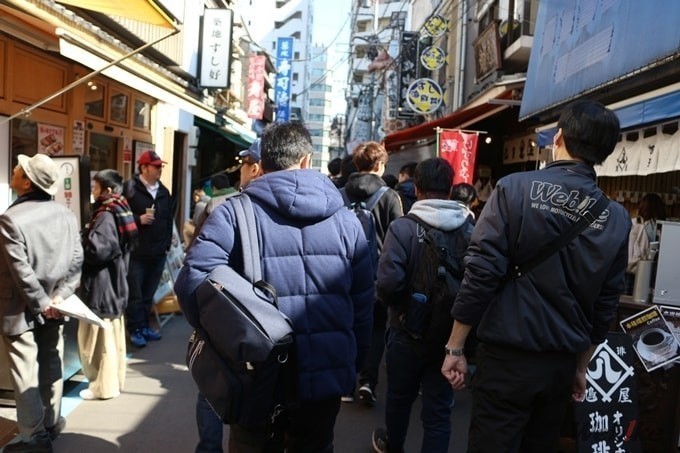 ▲ Wandering around while being attracted by a good scent of food 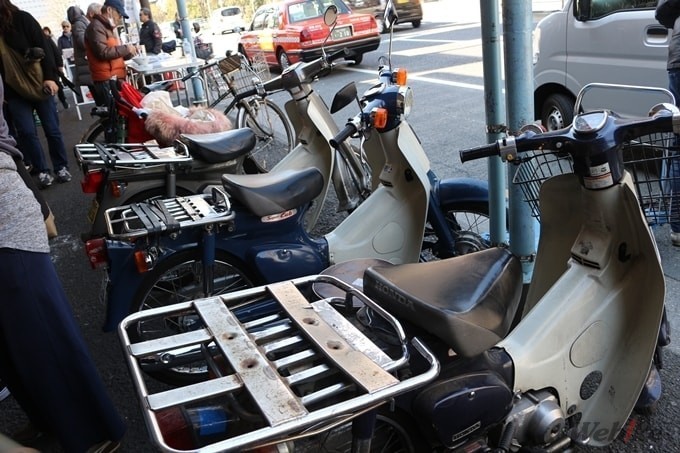 ▲ Cubs are essential in places like this. It is a working motorcycle.

We found a Motsu shop and decided to eat there. It's super delicious! 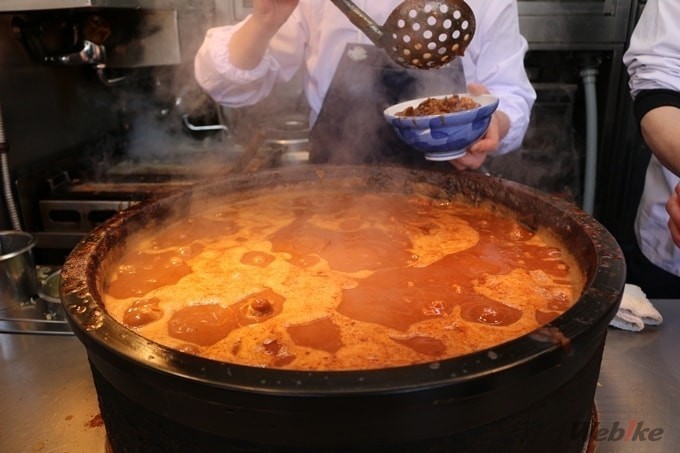 ▲ White rice is a good match…

We're going to the seaside.

We've got delicious Motsu and we're so full, so we're going to the next place. 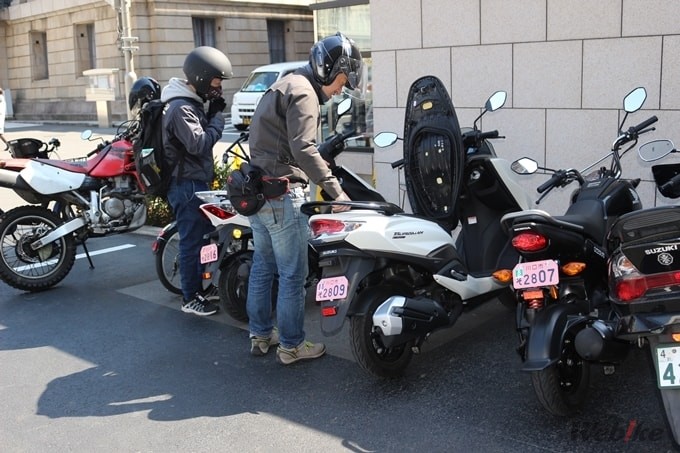 The next destination we aimed to shuffle everyone's motorcycle is Odaiba! With a full stomach and warmth overlapping with sleepiness, we rode our bikes just a bit more and headed at the sea.

Stopping the motorcycle at the final destination on the seaside and shooting time. It's good to have time to discuss the impressions of each motorcycle while drinking coffee.

I also took a picture of the running because it was a great deal (rider's height: 173 cm) 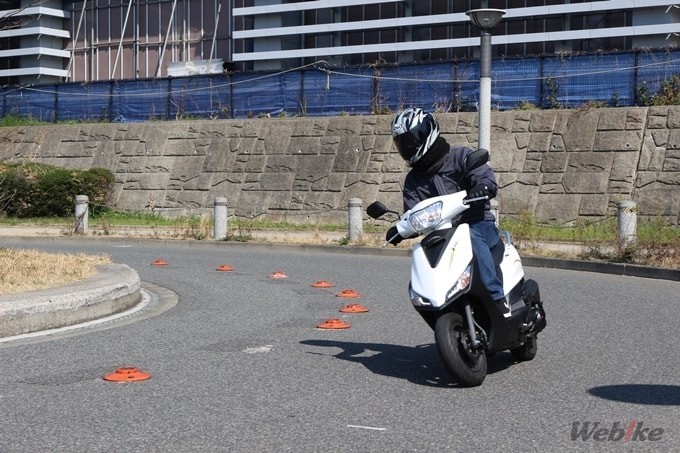 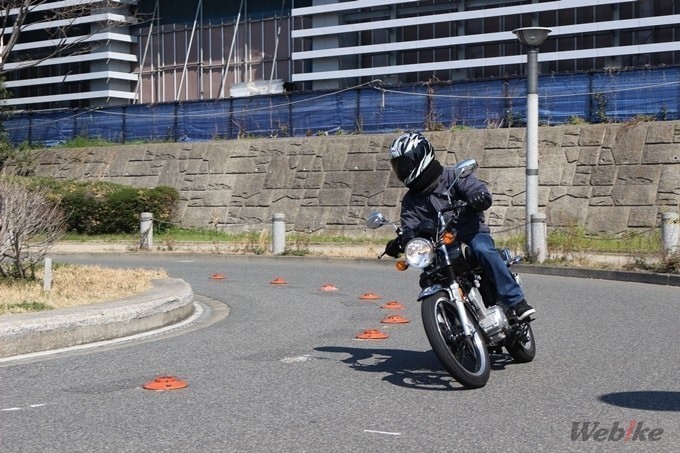 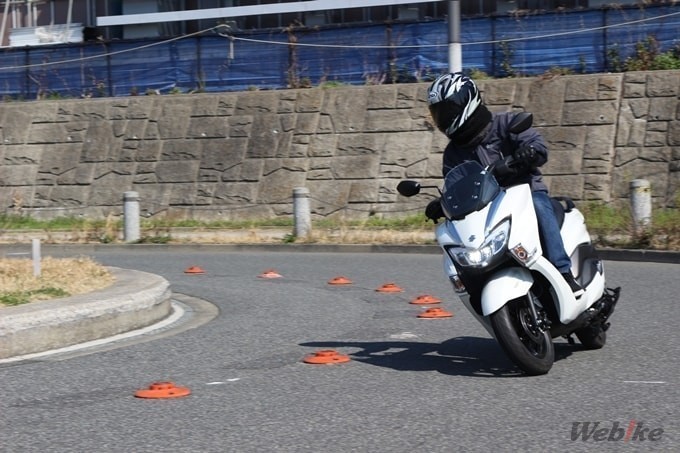 Since it was a whole trip, I exchanged the motorcycle again and arrived at the return road (while finding the Unicorn Gundam of Odaiba). On the way back home, we stopped frequently and exchanged motorcycles, and everyone was able to ride on all the motorcycles.

■ HONDA BEEZ100
It is the most orthodox model in this parallel overseas motorcycle scooter. The motorcycle case, which is almost the same as the 50cc class in the front and rear 10inches, reminiscent of the ADDRESS V125. Although it is a carburetor, the compact body is very easy to use in everyday use.

The point I interested, is that the display on the meter is probably happy.

■ HONDA NAVI110
Recently, the "straddle scooter" has been seen more and more on SNS. At first glance, the design is similar to the HONDA (MSX125) GROM, but there is no footpeg at the feet for the scooter, and the left lever is a rear brake. Since I can grip a knee, a sense of stability such as cornering is distinguished from a usual scooter. If it is an MT motorcycle, a special storage box is stored in the place where the engine is mounted. *The box is optional and is not standard equipment.

The displacement is 110cc, but it is undeniable that it is less powerful compared to Japanese production.

■ YAMAHA YB125SP
There are two types of a moped, but the motorcycle size and position are comparable to the 250cc class. Therefore, it is attractive that there is less stress on the ride. The meter is also equipped with a shift indicator, so you can see by your eyes how fast you're running.

I was a little worried that the needle of the tachometer will come with a little delay concerning the number of revolutions.

■ YAMAHA XTZ125
It is the same motorcycle as the full size of the off-road model, and I do not feel the cheapness in the feeling that I straddled. The mission was a gear ratio that assumed off-road, and the shift changes were often needed in urban areas.

It might be just right for riders who mainly use for commuting to school and sometimes want to do forest road touring.

■ SUZUKI BURGMAN STREET
This motorcycle class is one of the largest in the 125cc class, so the riding posture is relaxed. The tire size is 12inches on the front and 10inches on the rear, making it extremely quick handling. Since the wheel is small for the motorcycle, the handling that is too quick, on the contrary, there may be some riders who think that it is unstable.

It is so attractive that the lights are LED, the meters are digital, and the storage space is also rich.

The motorcycle with the highest evaluation among other Webike staff was "YB125SP". The size of the motorcycle was just right and there was a sense of stability. Since the small turn also works, the convenience is good.

On the contrary, the motorcycle that received a lot of complaints is the "BURGMAN 125". The size of the motorcycle is large, but the combination of the 12inch front tire and 10inch rear tire feels a little scary.

Conclusion: It's surprisingly cool, and it's cheaper than the other motorcycle in the same class!

For details of each motorcycle price, I would like you to check the reviews of each motorcycle model from the link posted at the beginning, but the motorcycle price is cheaper than parallel overseas motorcycles. The NAVI would be around 900 USD! In addition to that, the fact that it can easily be used for ultra-short touring with a feeling of strolling around is very attractive. If you compared with the Japanese model, it has some weaknesses and negative parts in its own way. However, overseas motorcycles also have fun and mysterious charms not found there.

If you want to see or want to ride, why don't you visit your local Bikers Station SOX near you? Small displacement overseas motorcycles are quite available! 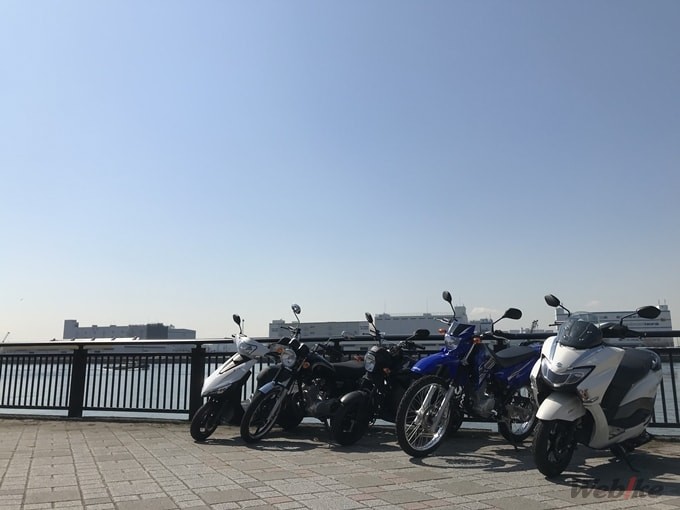 This is the right thing to do! Rust removal and rust removal from the gasoline tank
New V-STROM 1050/XT makes its domestic debut in Japan. The DR-Z, the monster bird that flew through Paris-Dakar in the 1980s The second time around?