Team-mate Fabien Quartararo was also unable to fight for the lead, but finished fifth to start his 60th anniversary year in the WGP with a good result.

Yamaha starts its 60th year in the WGP with a victory 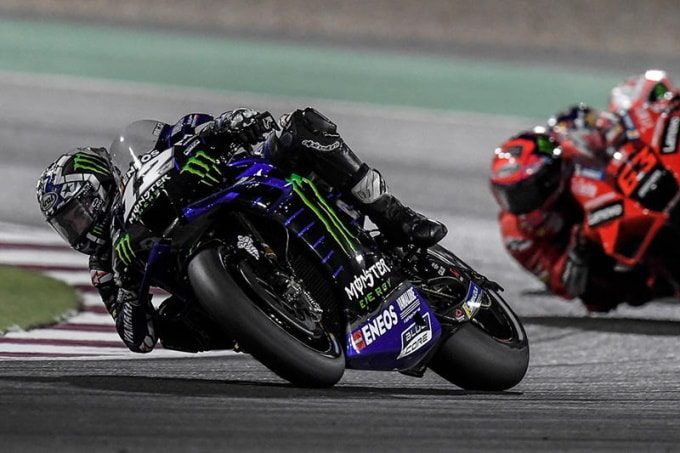 Viñales was third on the grid and dropped back to eighth immediately after the start. However, he soon found himself behind Quartararo and the pair pushed hard to gradually close in on the leaders, moving up to third and fourth respectively on lap eight.

Viñales continued to chase at an even more spectacularly high pace. On lap 10, he passed Cuartararo for third place. By lap 10 he had passed Cuartararo for third place and was closing the gap to Zarco (Ducati) in front of him for second. On lap 15 he finally took the lead from Fabien Bagnaia (Ducati). He continued to conserve his tires and gradually pulled away from the rest of the field, eventually taking the chequered flag with a 1.092 second advantage.

Quartararo, starting from second on the grid, was also a little slow and had to settle for sixth, with Viñales close behind. By the end of the first lap he had moved up to fifth place, and after catching Jonathan Martin (Ducati), he was now ready to challenge for the top three places.

On lap 5, Quartararo made a brilliant pass at turn 15 after setting up Jorge Miller (Ducati). At this point the gap to second was only 0.9 seconds, but at the same time he had to deal with pressure from behind. In this difficult situation, he wore out his tires, and when he could not increase his pace as much as he wanted, he could not keep his position. With 8 laps to go, he was back down to 7th, but then he made a last ditch effort and moved up to 5th place to take the checkered flag. The gap to the leader was 3.030 seconds.

Rossi and Morbidelli are 12th and 18th

Rossi's first race with the team saw him start from fourth on the grid and he dropped three places to seventh on the opening lap. A lack of grip on the rear tyre saw him drop to 16th on lap 12, but he was able to make up a few places as he rode hard to finish the race. However, he was able to fight his way back through the field to take the chequered flag in 12th position.

On the other hand, Morbidelli was confirmed to have a problem with his machine on the grid before the start of the race. So he switched his goal to finishing the race and focused on collecting enough data to solve the problem. He was 16th on the opening lap and dropped back to 19th on the second lap, but he kept his cool until the end and took the chequered flag in 18th position.

It's been a long time since I've passed so many riders in one race and it's great to be able to compete with so many of my rivals. I felt a special feeling with the bike early in the race and I had this great feeling in FP4 when we did the race simulation and also in qualifying. I am very happy because winning is not an easy thing to do. I want to share the joy with everyone today. I think our rivals will be even stronger next time and we will do our best to work with them. Today was a great result for the team and I want to say congratulations to the guys who have worked so hard over the winter. This win will be a great morale booster for the team in the future. It is always important for us to trust each other. We need to improve our start for next week but overall I think we are having a very good season.

I had a strong feeling early on. After I passed Miller I felt a lot of wear in the rear tyre. I had never experienced this before in practice and it was unexpected. I had to adjust my riding style, but Vinales had so much tyre grip that he seemed to be on another level and I couldn't hold him off. At the end of the race I changed the way I was driving and passed Rins and Miller. I think this was very good. Last year we made some mistakes as we continued to struggle and we finished 14th and crashed, but today we finished fifth and got 11 points, so I think we got a good result in a tough race. The gap to Maverick is about three seconds so it's not too bad.

Ideally we wanted to get a good start and for Viñales and Quartararo to be able to use the Yamaha line to get the most out of the M1. But we knew that our rivals would have a strong start and it would be almost impossible for them to take the lead at the first corner. Both of us knew what we had to do, and we worked together to get to the front, rather than having a long and unnecessary fight between teammates. In the end, Viñales took the win. It was a great battle. Quartararo didn't finish on the podium because of the unexpected tyre wear, but he drove very strongly until the end to finish fifth and bring home 11 valuable points for himself and the team. I am very happy with today's result. I am very happy with today's result and it is a great reward for all the hard work Yamaha and the team have put in. We will have a few days rest after this and then we will be back on track on Wednesday. We will be analysing and discussing the problems that Quartararo had today.

We had a good qualifying session yesterday and we were hoping for a higher position but unfortunately we struggled in the race. After a few laps we started to have problems with the rear tyre. I had experienced this on Friday and I was hoping that the problem would be less in the race when the temperature was lower. Unfortunately the feeling was almost the same and I lost a few places. I didn't get a bad start and I think I was fast enough going into the first corner but my competitors were very fast and I couldn't get in front of them. We will try to solve the problem and be in better shape for the next race.

It was a very difficult race. We found a problem on the grid but we decided to go for it. I wanted to finish the race for the sake of the team who are working very hard and I thought that would help us to understand how to solve the problem. In the race it was more than obvious that something was wrong, as we have seen during this weekend. It's a real shame that we had to race like this. But I think it was a good thing that we were able to collect some data to understand the current situation. We will try to solve the problem by the next race.

It was an unexpected result for a number of reasons. It was clear that Rossi had a problem with the rear of his bike and we will now ask him for his opinion so that we can prepare for the next race. Morbidelli also had a mechanical problem and was far from his best. It is good that he was able to finish the race and we were able to collect data for the future. Last but not least, I would like to congratulate Viñales for his victory.