On February 15, Yamaha Motor Co., Ltd. held a virtual reality presentation to announce the lineup of the "Monster Energy Yamaha MotoGP" team for this season, which marks the 60th anniversary of the team's first entry in the world road race championship in 1961.

From the following press release 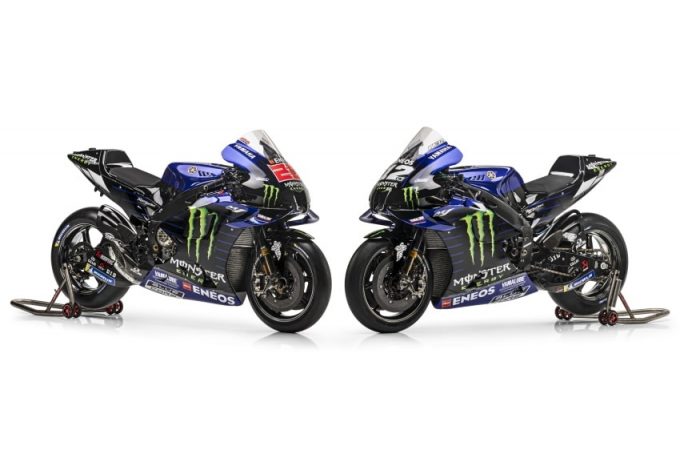 In 2017, Viñales joined the factory team and won two consecutive races to finish third in the championship. Despite struggling in 2018, he fought hard to finish fourth in the ranking, winning the Australian Grand Prix. In 2019, his victories in the Dutch and Malaysian GPs brought him back to 3rd place in the ranking, and in 2020, he joined the title fight under difficult circumstances, eventually finishing the season in 6th place in the ranking.

Quartararo, on the other hand, is a newcomer to the team this season, but is already well known to MotoGP fans, having competed for the Petronas Yamaha Sepang Racing Team until last year. In 2019, when he debuted in MotoGP, he stood on the podium a total of seven times (five second-place finishes and two third-place finishes), finishing fifth in the ranking and winning the Rookie of the Year award. In 2020, he took his first win in the highest class at the first round in Spain, followed by back-to-back wins at the second round held a week later at the same circuit, and his 3rd win came at the Catalunya GP, where he finished 8th in the standings.

In 2019, he made his MotoGP debut and finished on the podium a total of seven times (five-second places and two third places). He made his MotoGP debut in 2019 with seven podium finishes (five second places and two third places), finishing fifth in the championship and winning the Rookie of the Year award. His third win came at the Catalunya Grand Prix, where he finished eighth in the championship.

The livery of the YZR-M1 is the same as last year, with a gradation from Monster Energy's black to Yamaha Factory Racing's blue, including the pit box and leather suit. The Monster Energy claw logo is also represented in the team logo and team uniforms. 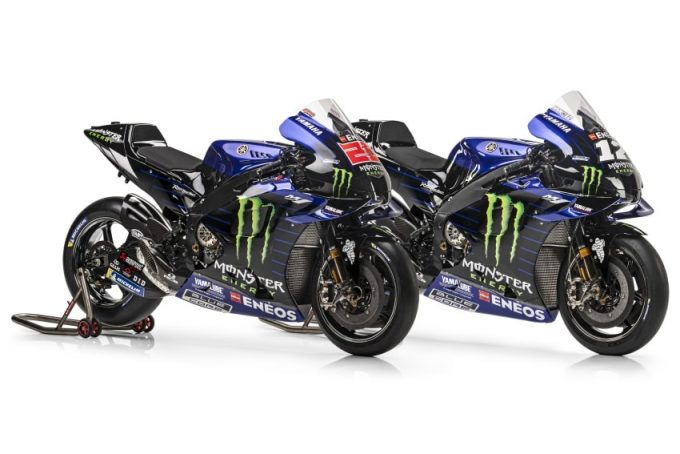 Monster Energy Company, which agreed to a multi-year contract as title sponsor of the Yamaha Factory Racing MotoGP Team in the summer of 2018, has been a long-term global partner. In addition to MotoGP, they support many Yamaha teams and riders including Viñales and Quartararo in various categories.

The team also announced that it will compete throughout the 2021 season, beginning with the official tests in Qatar on March 6-7 and 10-12, along with Thai Yamaha Motor Co. Ltd., PT Yamaha Indonesia Motor Manufacturing, and Yamaha Motor Philippines.

Cal Crutchlow, the newly signed Yamaha Factory Racing MotoGP test rider, will join Viñales and Quartararo at the Losail International Circuit for the test. Crutchlow, who has a wealth of experience in the highest class, will return to action for the first time in seven years on March 5 with a shakedown test of the YZR-M1.

Monster Energy Yamaha MotoGP has signed a new contract with VR46 Racing Apparel as the official team wear manufacturer for the 2021 season. All clothing will carry the VR46 Racing Apparel logo and the same products will be sold globally. In addition, Yamaha will continue to support the Yamaha bLU cRU program to help young on-road riders who aspire to become the next generation of racing stars, and Viñales and Quartararo will become ambassadors for the program.

Finally, Monster Energy Yamaha MotoGP will continue to work closely with Valentino Rossi, Franco Morbidelli, and the Petronas Yamaha Sepang Racing Team throughout the season with a view to continuous technological progress. Rossi will ride the factory full-spec YZR-M1, while Morbidelli will ride the A-spec YZR-M1, both of whom will receive full support from Kawasaki engineers to further develop their machines.

I would like to thank all the Yamaha MotoGP fans around the world who are waiting for the season to start. We at Yamaha Motor's Motorsport Development Division are already preparing for the start of the 2021 season. Last year was a very difficult year for all MotoGP riders, teams, and staff. During this time, riders and teams worked together to overcome many difficulties. This year is the same as last year, we will work together to win the MotoGP title. We will aim to win the championship by making the most of our experience from last year and adding our own creativity and ingenuity to it. We are confident and ready to do so and look forward to the success of the Monster Energy Yamaha MotoGP Team and the Petronas Yamaha Sepang Racing Team with four great riders.

This will be our 9th season with Monster Energy Company as our sponsor and our third season as title sponsor. We are proud of our long-term partnership with them. This close relationship can be seen not only on the track, but off the track as well. Our team is truly grateful to Monster Energy for their continued support and contribution, as well as their interest and passion for the sport of motorcycling.
This also applies to our many other official sponsors, partners, and suppliers. Without their support, we would not be able to compete at the top level.
Last year Yamaha won 7 races and led the championship with more victories than any other manufacturer, but they were not able to fight for the points and lost the title. This year, with the aim of winning the MotoGP World Championship, we will have two championship contenders on the motorcycle. It's clear what we need to do. We have to win races and maintain our consistency throughout the long season. With the improvements to the machine and the changes within the team, I am confident that we are ready for a new challenge.

It's been a tough season in 2020 but we've learned a lot from the experience and we're looking forward to the 2021 season with high expectations. With the Sepang test canceled due to the ongoing spread of the new coronavirus disease, fans will have to wait a little longer, but we are now confidently looking forward to the forthcoming Qatar test. Yamaha's engineers have spent a great deal of time working on the M1 to drive its development. Now it is the team's turn to test a lot of new things. We will do our best to compete in the 2021 season with these two young riders. We can't wait to get started.

Last year was difficult for all of us, but now we have put that behind us and are focusing on the future that is coming. We had two tests canceled at the Sepang International Circuit and now we have to wait a little longer before we can ride the YZR-M1.

It's been a very long winter break but after enjoying a rest during the off-season I'm now really looking forward to the start of the season. The only test opportunity we have is the Qatar test, so we have to be ready to show what we can do right away.

I'm really looking forward to the start of the season with my new team. I can't wait for the Qatar test because I'm looking forward to riding the Monster Energy Yamaha YZR-M1. I've seen many composite photos with my number on them through social media, but seeing the real thing for the first time with my own eyes was a very special feeling. I can't wait to ride the YZR-M1!