The FIM International Motorcycling Federation (FIM) has announced that it has updated the provisional dates for the 2021 season of the MotoGP World Championship.

Under the new provisional calendar announced this time, the Qatar Grand Prix will be held at the Losail International Circuit as the opening round, followed by the second round in Doha on April 4. The Portuguese Grand Prix was held at the Autodromo Internacional do Algarve on April 18, when the third round of the season, the Americas Grand Prix, was scheduled to be held.

There will be no changes to the schedule after the fourth round in Spain on May 2, but one race between the Finnish and Austrian GPs, whose date and the venue was yet to be decided, has been dropped from the schedule.

With the Indonesia GP as the reserve Grand Prix, the Russian Grand Prix has been removed.

All dates and events, spectator mobilization, etc., are subject to approval by the government and authorities responding to pandemic developments. 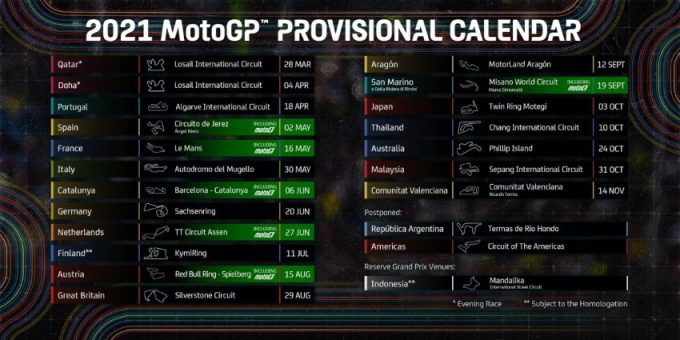