The Austrian Grand Prix, the fifth round of the 2020 MotoGP season, was held at the Red Bull Ring on August 16, and Ducati Team's Andrea Dovizioso took a stunning victory to give Ducati its 50th MotoGP win.

Ducati, based in Bologna, Italy, has won at the circuit for five consecutive years since the Red Bull Ring returned to the race calendar in 2016.

Dovizioso takes victory and second place in the riders' standings 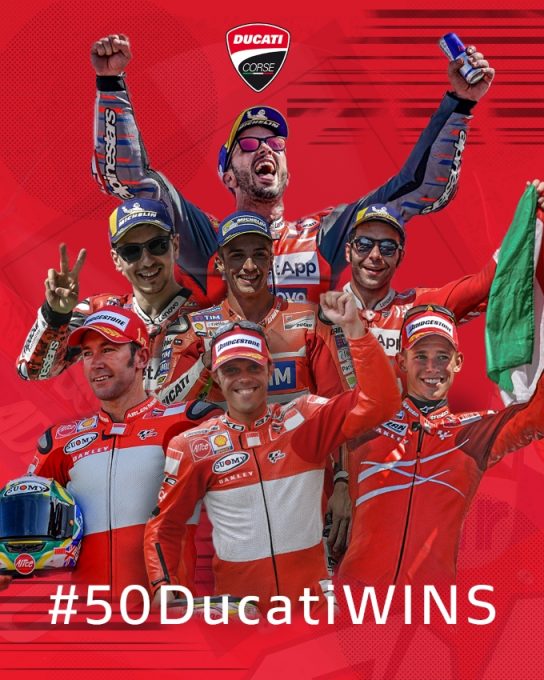 Teammate Danilo Petrucci, who started 13th on the grid, finished seventh and scored valuable points. Petrucci is now 11th in the riders' standings.

At the end of the first four races of the 2020 season (the opening round in Qatar was not held in the highest class), Ducati is second in the manufacturer's standings and third in the team standings.

The sixth round of the MotoGP season, the Styrian Grand Prix, will be held a week later, from August 21-23, at the same Red Bull Ring as this one.

It was a very different race to the usual one because of the interruption caused by the big crash between Zarco (Johan: Ducati) and Morbidelli (Franco: Yamaha). I didn't have a particularly good feeling with the machine today but I was able to go fast in certain sections and make a difference to my rivals. We had a good start to the weekend but I wasn't convinced we could win the race. In the race I was aggressive right from the start and got a good feeling but compared to last year's race I still feel like I'm missing something. This track suits the characteristics of the Desmosedici GP machine but we need to continue to improve the machine so that we can fight for the win in all the races that are coming up.

We knew from the start that it was going to be a difficult race today. The confusion on the opening lap cost me a couple of positions. Unfortunately, I didn't have a perfect feeling with the machine. I'm still having problems with the brakes and I couldn't ride the way I wanted to. We had a good pace in the race today but we lost a lot of ground on the front group. We took some valuable points home for the championship but it's important to get a good grid position in qualifying so we can be in contention from the start at the next race.

It's been a difficult race since the start of the season so this win means a lot to me. It was a different story today with the race being suspended. Dovizioso proved to me that the machine is very competitive and fast. After the restart the track conditions were different but we had a few things to look at beforehand and we changed the front tire, which was a good decision because it meant we were able to get the machine back on track. I want to congratulate Dovi and the whole team for doing a great job this weekend. We want to keep this fighting spirit going for the next races and also until the end of the season.