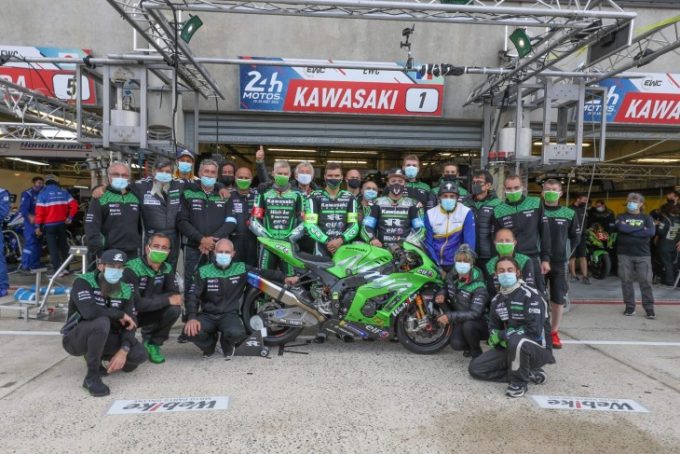 At 12:00, Webike SRC Kawasaki France TRICKSTAR (hereafter referred to as SRC), which started from the 7th grid, made good progress in the early stages of the race and was within striking distance of the 3rd place rider. However, when he tried to overtake the third-placed rider, his lines crossed and he went off the track, dropping back to tenth place.
He immediately returned to the course and started to catch up again. By the time two hours had passed, Checa had moved up to 4th place with his furious pursuit.

The rain starts to fall, and in the midst of a rough race, the team makes a further push to take second place.

After 3 hours, the rain started to fall and the track turned into a rain condition.
In difficult conditions with many teams crashing, he was able to outpace the leaders at a high pace and finally move up to 2nd place.
With only TSR Honda France remaining in the lead, the team continued to chase down the leaders without slowing down after moving up to 2nd place.

It stopped raining and it became dry condition again.

By the 7 hour mark, most of the track was dry and slick tires were back on, with Jeremy leading the chase for TSR. By the end of the 8 hours, the track was completely dry and it was time for the night session.

The area was completely enveloped in darkness and the night session was the crucial moment of the endurance race. Halfway through the race, the SRC was in 2nd position and running smoothly without any major problems.
However, as the 14th hour approached, Checa pitted in before the scheduled number of laps. The trouble occurred here. Fortunately, it was not a serious problem, and the team quickly replaced the parts that could have caused the problem, as well as the brake pads, before returning to the course. (In the 24 hour endurance race, brake pads and calipers are changed at least once during the race. This was the decision of an endurance specialist who was able to correct the problem and reduce the loss of pit time as much as possible.
This emergency pit stop dropped him down to 3rd position.

The temperature dropped sharply and the conditions were difficult, so it was a period of endurance.

With eight hours to go until the checkered flag, the time was 4:00 a.m., and both riders and staff were starting to show signs of fatigue.
The temperature was dropping rapidly and it became a harsh environment. Despite this, all three riders showed no signs of fatigue and continued to attack without slowing down. They finished the day in 3rd place.

With 30 minutes to go to the finish line, Masson of SERT made a decisive attack to catch up to 30 seconds behind.
Jeremy, SRC's checkered rider against Masson's pursuit, enters the final spurt.
The Webike SRC Kawasaki France TRICKSTAR was never able to close the gap and took the chequered flag in 2nd place.

It was the first time in a long time to hold a race, but it was held without spectators, and there was some confusion in the atmosphere that was different from usual. I would like to express my heartfelt gratitude for being able to hold the race.

This race was held while the director Gilles was ill and could not come to the circuit.
In the absence of Gilles, it was left to Isabelle and chief engineer Bernie to take over as team manager, but the team won the Le Mans 24h here last year with the same riders and staff, and their expressions and actions seemed full of confidence.
The only difference was the tyres. Pirelli had to withdraw from the EWC due to the Corona virus, and the teams that had been supported by Pirelli suddenly signed a contract with Michelin tyres for this race.
The performance of the Michelin tyres was excellent, as they are the tyre manufacturer supporting Moto GP. But no matter how good the tyre is, it needs time to be matched to the machine.
This time, we struggled to put it together in a short time.

In the qualifying session, I was not able to set the best time because there were no tires for qualifying and the conditions were different in each section. If we had a little more time to test, we would have been able to bring the bike up to the level of the top teams.

In the race, it was raining on and off and in difficult conditions, but I think the riders and crew did a great job and stayed focused for 24 hours without making any mistakes.
Even when there was trouble on the way to the race, the team did a great job of starting from a good point and making good decisions.
Each rider did a really good job and Checa did a great job for the team with high average lap times in dry, half wet and rain conditions with as few mistakes as possible.
Erwan set the fastest lap time of anyone in the rainy conditions and made up a lot of places.
Jeremy was the last rider of the race and he rode very well to take the 2nd place from the 3rd place. I was so proud to see them as the champion riders.

We didn't win the race but I'm very happy with second place because it's a great result in such a difficult situation.
The TRICKSTAR muffler has been updated many times and we are very happy with the performance and the results that we have achieved.
Based on this result, we still have a chance to win the championship, so we will try to win the next round in Portugal and also win the title again.
And we wish Director Gilles a speedy return.

Last but not least, I would like to thank all of you for your support.

Ninja ZX-25R Test Ride Review | A Screaming Machine that Goes through 17,000rpm
Yoshimura has Released a Mask with a Great Fit!