The opening round of the All Japan Road Race Championship was held at Twin Ring Motegi in Tochigi Prefecture on April 3rd and 4th. Last season's event had to be rescheduled due to the spread of the new coronavirus, but this season's opening round went ahead as planned with all the necessary infection control measures in place.

This event had special sports race on Thursday. In the previous week's pre-test, the machine was ridden for the first time since last year's final round, but with a time of 1 minute 49.853 seconds, the team placed 4th overall on the first day. On the following Friday, the team ran two ART joint races, one in the morning and one in the afternoon, to check and adjust the details of each part of the machine. The best time was 1'50.424.

Satoshi Hasegawa is in his second season in the ST1000 class. This year, he will be focusing on how to handle a 1000cc machine. In the pre-test, Kagayama checked Hasegawa's driving from the front and back during the mixed JSB and ST races, and gave him careful advice.

The JSB1000 class has two races on Saturday, so the best time will be taken in race 1 and the second-fastest time will be taken in race 2. Kagayama, who had been experiencing chattering symptoms since the start of the race weekend, was scheduled to make two attempts but was only able to make one, but still managed to set his best times of the week of 1'49.128 and 1'49.246 to take 6th on the grid for Race 1 and 5th for Race 2. Hasegawa also set his best time of 1'51.470 seconds to finish 9th on the grid.

Race 1 of the 23-lap JSB1000 class was held at 2.05pm on Saturday afternoon. Kagayama, who has a good reputation for getting off the line, entered the first corner in the 8th position and was eighth for the opening lap. He was confident that he could be in contention for the podium after his performance in the qualifying session, but he suffered a minor brake problem and was forced to ride to avoid hitting the rider in front of him. He was forced to ride hard to avoid crashing into the riders in front of him. Midway through the race, the problem became worse and he had to change his riding style to try to finish the race, finishing a disappointing 10th.

Sunday's final race in the ST1000 class was declared wet due to the rain that started falling just before the race and the race will be held for 12 laps with 2 laps deducted. The track surface was half wet. Hasegawa chose slick tires to start the race in these delicate conditions. As the rain became a little heavier, his pace dropped drastically and he dropped to 16th position. However, as the rain stopped and the track gradually dried out, the slick tires took advantage. The pace increased and the team finished 5th.

Then it was time for Race 2 of the JSB1000 class. With the track in dry condition, the race started as planned with 23 laps to go. Kagayama made a good start and came back from the opening lap in 4th position. He then dropped one position to fifth, catching up with the first four riders. However, the gap was gradually closing as the motorcycle started to bounce more and more. At the end of the race, he and Hamahara were battling for 5th place. At the end of the race, the two motorcycles in front of them retired, so it was a battle for the 3rd place podium. Hamahara was saving his energy for the last race, but then the rain came again. Unfortunately, Kagayama had to settle for 4th place as the results from one lap earlier were used to determine his position.

On Sunday, we were at the mercy of the weather, but I think we had a good opening round throughout the weekend. By the next round at Suzuka, we will work on the machine set-up and aim for even better results. I would like to take this opportunity to thank all of our sponsors for their generous support, which has allowed us to continue our racing activities this season. We hope to meet the expectations of our many fans with exciting races. We look forward to your continued support. 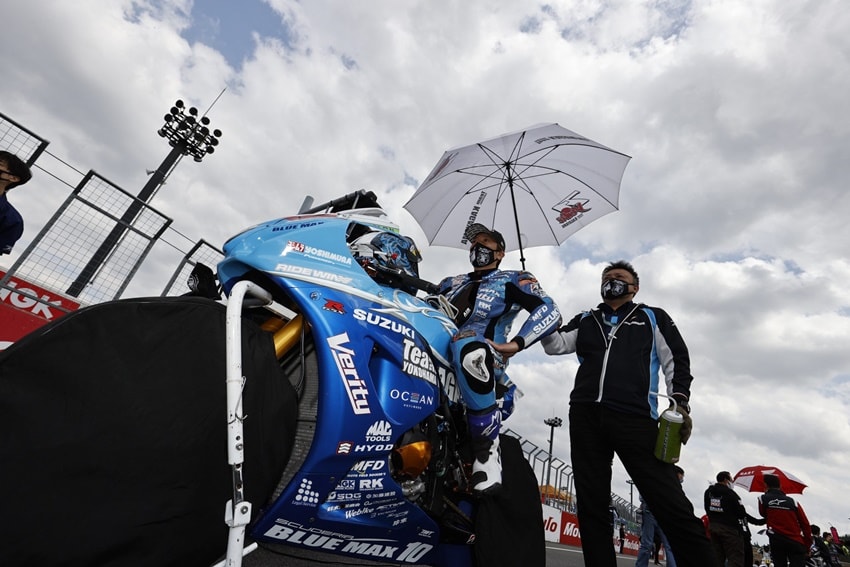 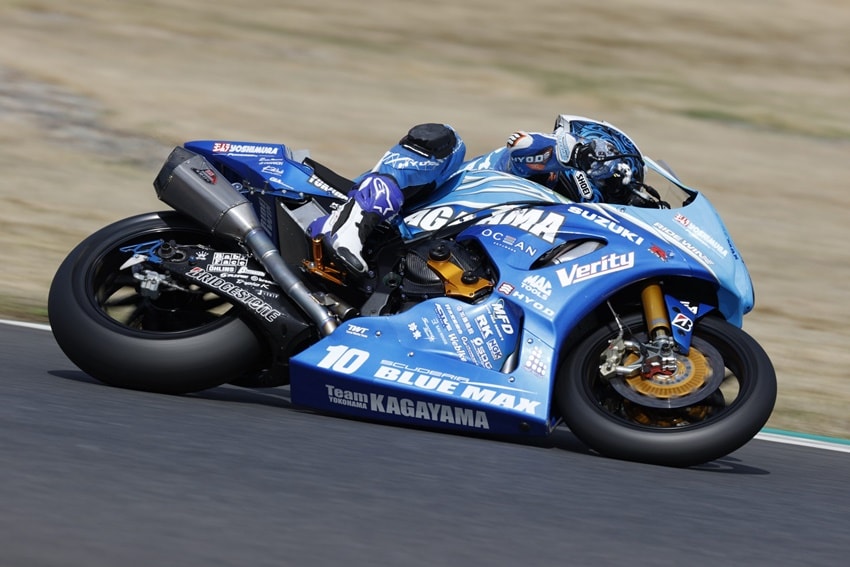 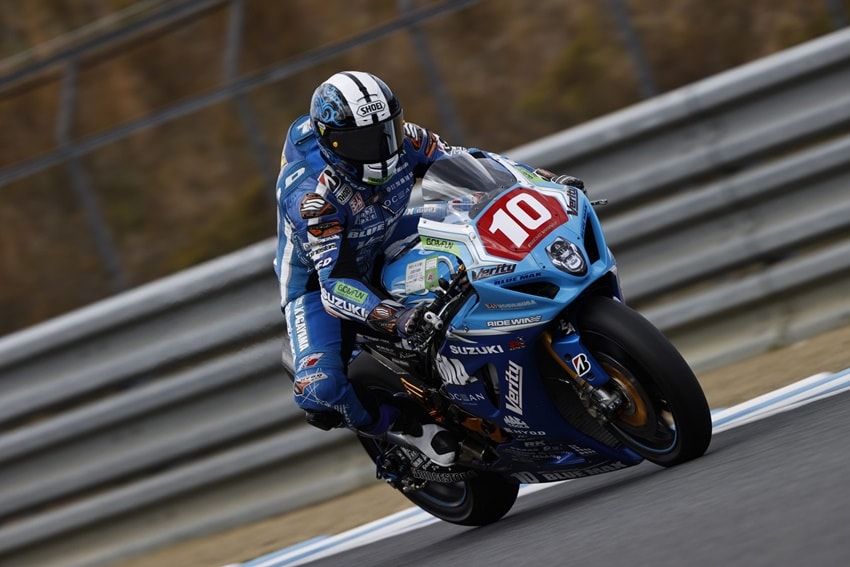 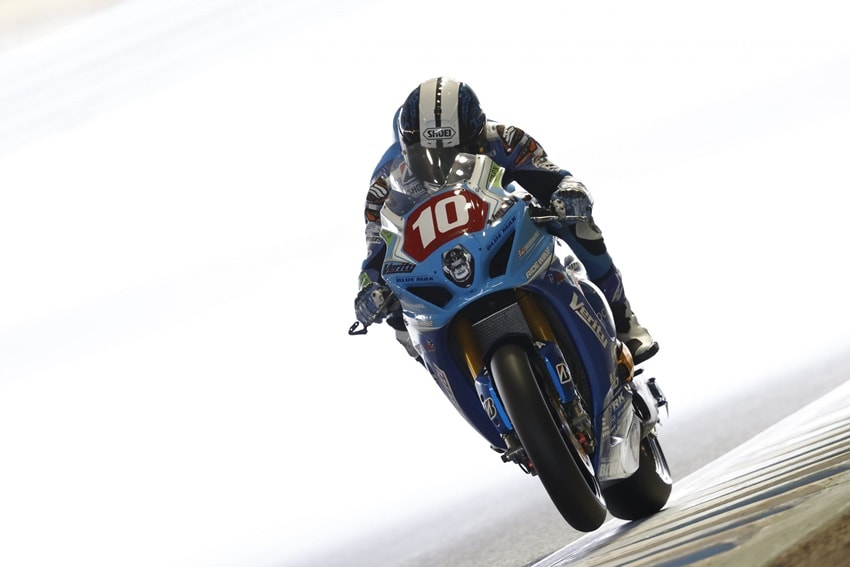 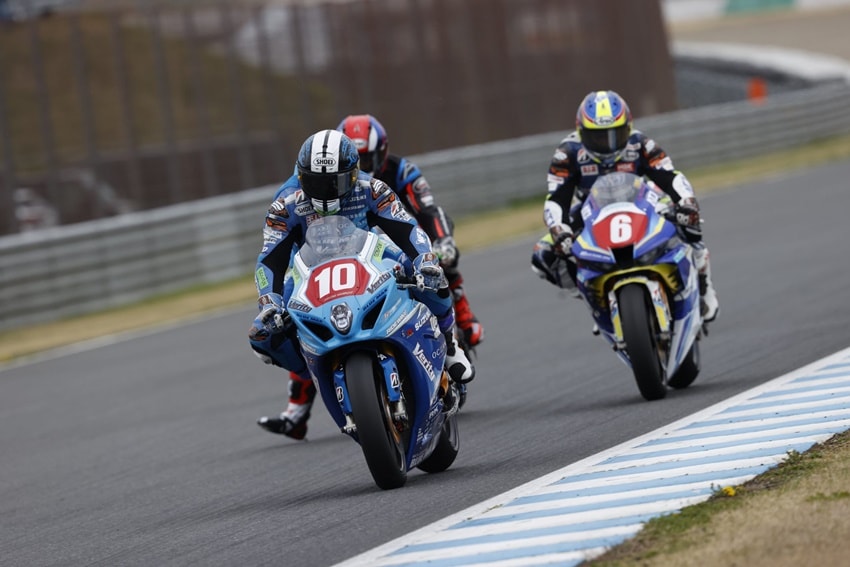 I had not ridden the JSB machine for a long time in the previous week's pre-test but I was able to ride comfortably on Thursday and Friday with my best performance of the year. I was able to ride my best on Thursday and Friday. I thought I could fight for the podium if I was on the second row but I had a minor problem with the brakes in race 1. I had a minor brake problem in race 1. In the first race, I had a minor problem with my brakes. It was a disappointing result because I had confidence in myself. In race 2, I had a problem with motorcycle bouncing which I had been experiencing this week. I got a good start and tried to stay with the front group, but every time the motorcycle bounced I got separated from them. At the end of the race, I was going to fight with Hamahara for the podium, but when it started to rain and Hamahara's pace slowed down, I was able to overtake him, but right after that the red flag came out and I was unable to get on the podium. Because Kiyonari and Kamei retired, we were fighting for the podium, so we were actually fighting for 5th place. I want to improve the machine and rider to be able to fight for the podium by myself. We are able to race under the Corona disaster because of the support of our sponsors. Thank you very much for your support. We will continue to fight this season with a sense of gratitude to our sponsors and a desire to respond to the support of our fans. We look forward to your support. 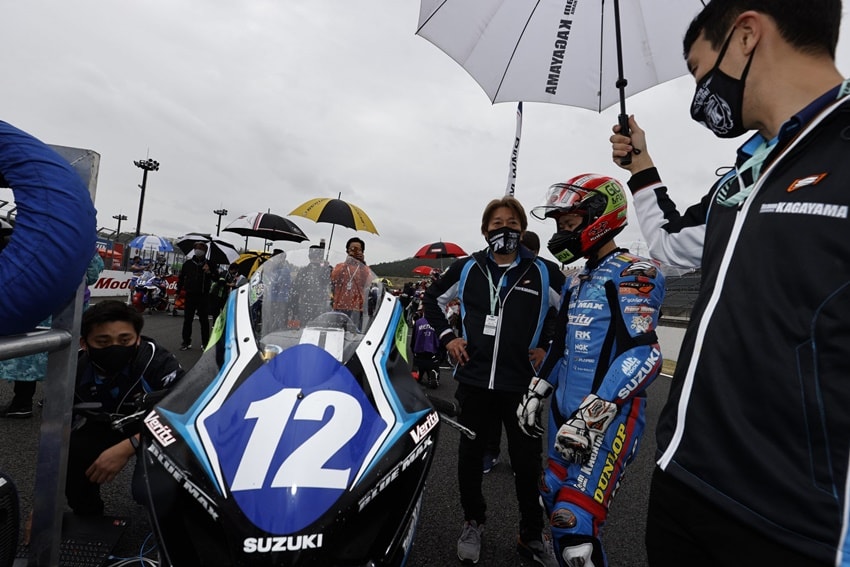 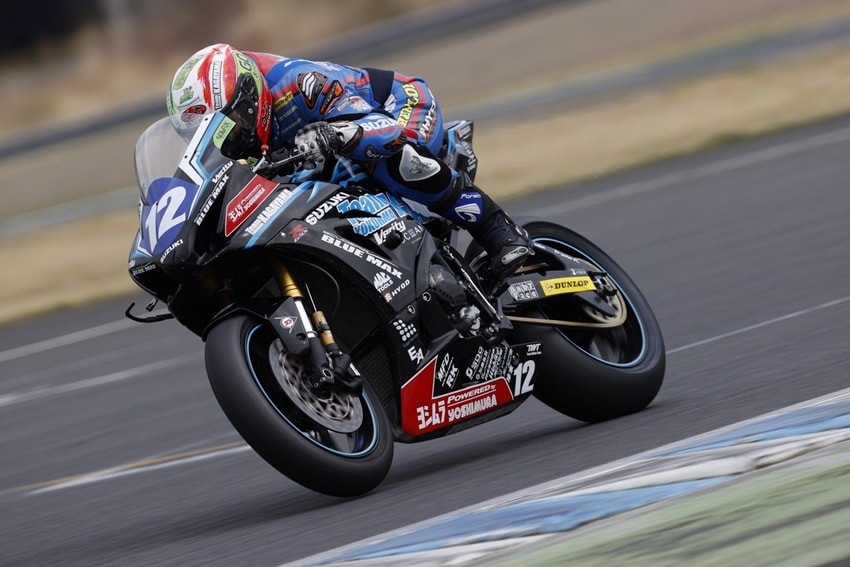 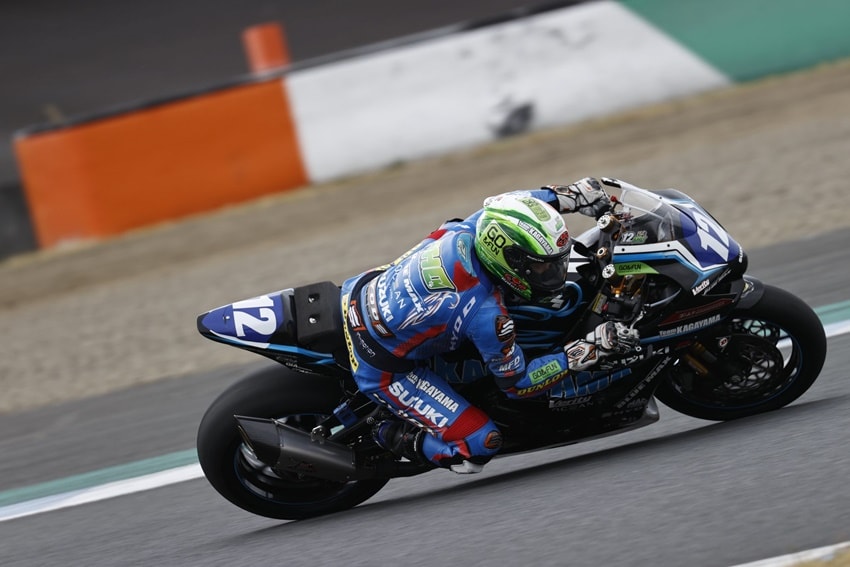 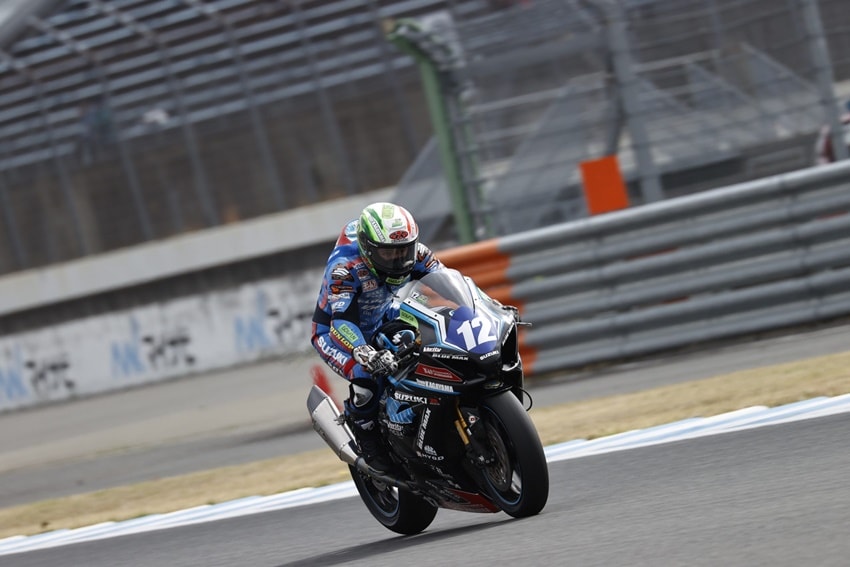 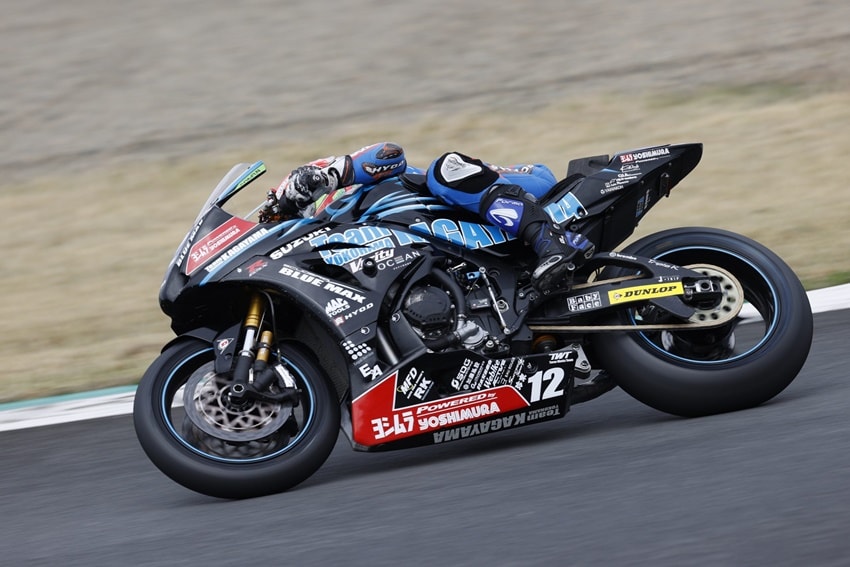 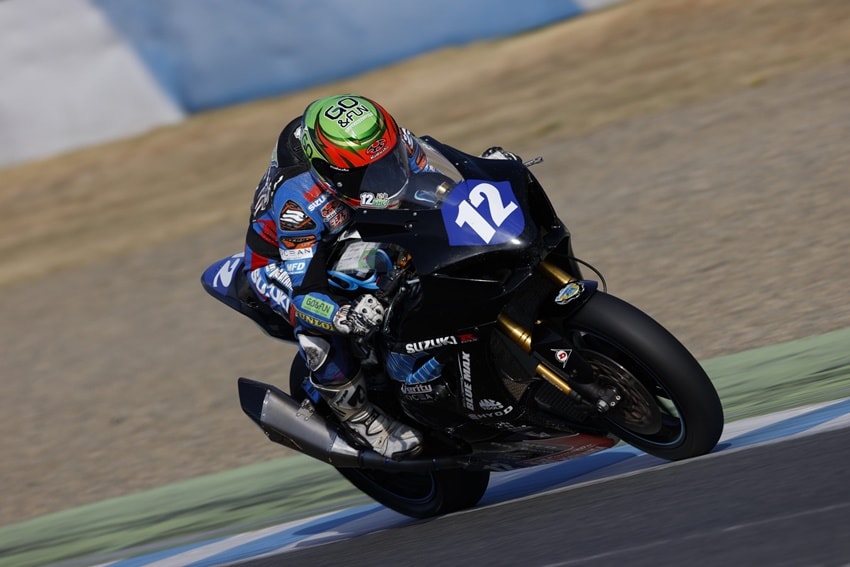 As for Hasegawa, he was able to improve his time during this weekend, so I think he worked hard and grew. In terms of the machine hardware, there were not many changes that we had to make, so we worked on the set up, but I think the big improvement was in the rider's skills. In the race, the conditions were difficult and it was hard to increase the pace even when the track was drying out, but I think we did a good job without crashing. Kagayama's condition wasn't too bad from the pre-test, but he was struggling with chattering. He was able to get a good time but we were trying to improve the motorcycle to get to the top but we couldn't solve the problem this time. I was able to use harder tyres, which gave me more options. With the firmer tyre, the racing speed increased and it was harder on the brakes and in race one we had some problems because of the high temperature. We need to go faster if we want to be in the top group in both Race 1 and Race 2, and now we know what we need to do to improve.