Since I already introduced the 6-inch custom in my previous article. Next, I will be introducing the 8-inch custom. Please check out below the demonstration model with custom specs of HONDA MONKEY for customizing reference from G-CRAFT. 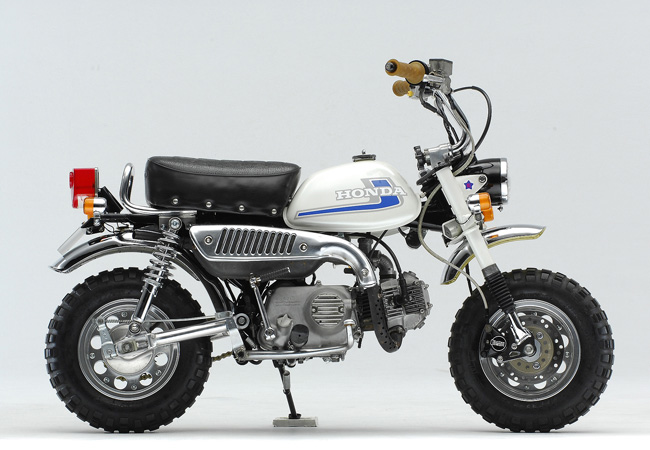 This is a custom made MONKEY, commonly known as a 4L. It is equipped with 8 holes of 8-inch front and rear 2.75J wide wheels, which are slightly thicker than OEM wheels.

The swingarm uses a "normal look swingarm" that takes advantage of the 8-inch style. By extending arms, the rear fender and the radius of the tire will match, and straight-line stability will also improve.

The rear swingarm is 7N01 aluminum material, made in Japan. The material is strong and easy to weld. The pipe outside diameter is 30mm, which is larger than the OEM pipe to increase the rigidity around the rear. 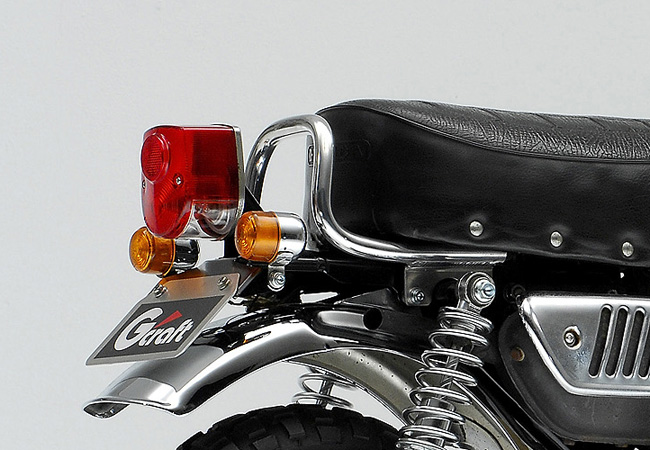 Around the tail, the rear carrier was removed and a grab bar was installed. It was shortened to the extent that it does not destroy the OEM style. It is equipped with a short tail bracket (Parts 31218) and a grab bar (Parts 32074) for 4L. 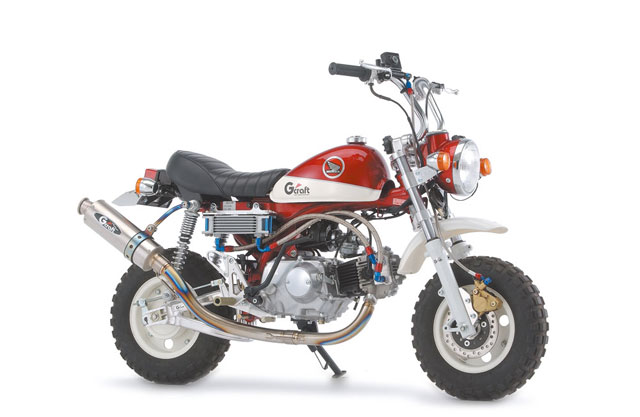 The MONKEY with a front disc in an 8-inch original style MONKEY. Using the front forks for the NSR Mini matches with the BREMBO 2P caliper. It is a MONKEY with drastically improved riding and braking performance.

The rear has been fitted with 4cm long swingarm for improved straight-line stability while maintaining the OEM MONKEY look. A stabilizer has been added to further increase its rigidity.

The motorcycle listed above is a combination of BREMBO 4P discs on the front 3.5J wide wheels and 5.5J wide wheels + AP lockheed caliper on the rear. A 5.5J wide wheel, which is also the largest of the 8-inch wheels, is fitted to the rear. The super-wide swingarm, the widest of all G-CRAFT swingarm (210mm), was introduced to allow for the installation of these wheels. (The photo shows a low-cost swingarm that does not use the super wide suspension support).

The chain line is a problem when installing thicker wheels in the rear. Since the wheel is more than twice as big as the normal wheel, the chain and the wheel rim will interfere with each other as it is. In this case, use the 20mm offset aluminum billet generator cover, and the front offset sprocket 20mm sprockets 16-teeth to move the chain line outwards. 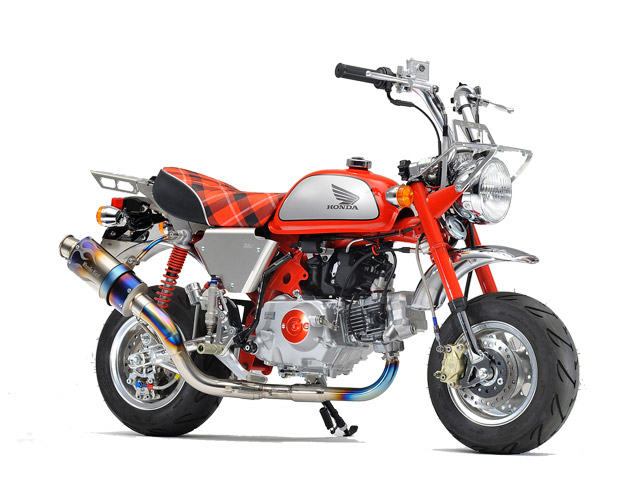 One of the major differences between the MONKEY FI and the previous MONKEY is the battery located under the seat. Because of that battery location, the seat height cannot be lowered, so G-CRAFT developed a battery relocation kit to move the battery to the side of the frame, allowing for the use of a custom seat for a previous MONKEY.

The G-CRAFT order seat is installed on this MONKEY FI. The seat is made from the checkered pattern that is used on the limited edition MONKEY FI and the stepped tuck roll seat. You can choose other seat covers as well. See details of the G-CRAFT custom-made seat* where the photo shows the seat-mounted with parts 31165 rear carrier, but it can also be mounted with the OEM rear carrier.

The shape of the engine has been changed and the generator cover has been extended, which means that the old rearsets are no longer compatible with the old rearsets and the old rearsets for the MONKEY can no longer be used. This is why G-CRAFT developed the 3-position rearsets type-2 for the FI MONKEY, which was popular on the 5L MONKEY, and is now available in both drum and disc versions.

This is a light custom MONKEY with front and rear suspension changes and discs while maintaining the 8-inch wheel MONKEY style. The combination of 2.75J front and 3.5J rear wheels have been widened. The front end uses Yamaha Brembo calipers for improved brake control and the use of NSR Mini upright front forks for improved performance. The exterior is a flat custom seat tuck roll type with a 5L taillight bracket and grab bar. It has been replaced with a striker up exhaust system. 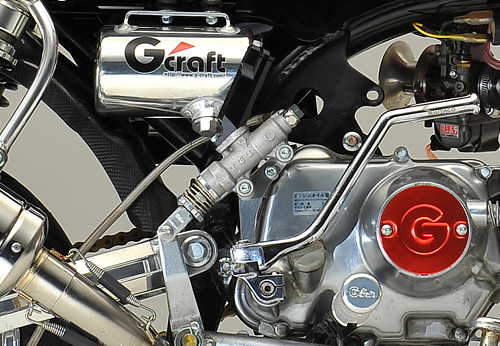