The Forza, which was newly introduced in 2018 with a height-based style that broke away from the traditional low and long, has already been redesigned and is going to be released in late March. The release date and price have not been officially announced yet, but I was able to photograph the planned production model and would like to give you an overview of it.

The electric screen has a 40mm longer movement range and the engine has evolved to eSP+.

The new Forza features the "eSP+" engine, a further evolution of the "eSP" engine that delivers both environmental performance and power characteristics. Friction loss and vibration have been reduced while intake and exhaust efficiency has been improved.

In addition, the materials and joints of the frame have been reviewed to achieve light handling. At the same time, the radiator has been moved from the rear of the fuel tank to the front, optimizing the engine's cooling effect and load distribution to the front, as well as providing easy handling at low speeds and secure handling at high speeds. 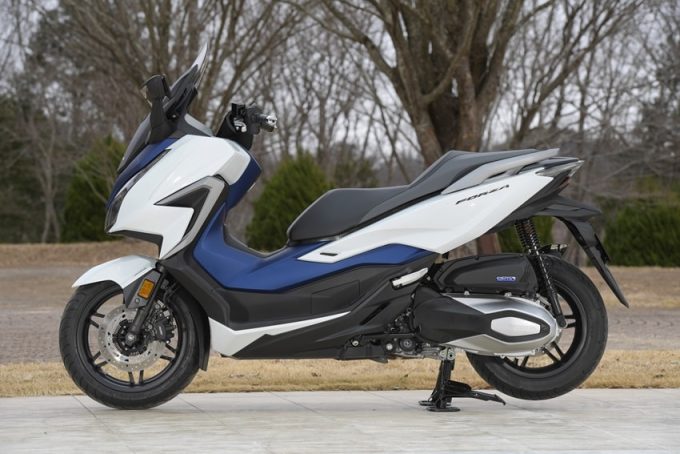 The new Forza. The same 15-inch wheels at the front as before providing a high level of stability.

For utility equipment, the electric screen has been extended by 40 mm to improve wind protection and comfort. A USB socket has been added to the front left-hand inner box, and the luggage space under the seat now has enough space for two full-face helmets. Other features include ABS for increased braking confidence and traction control that can be selected according to road conditions and personal preference.

The design includes spoiler-shaped parts in the front section, and the flow lines generated from the upper part of the massive front side converge at the front wheels to promote the exhaustion of heat from the inside of the vehicle and create functional beauty.

This is with the screen up. It can be raised and lowered electrically, so it can be ridden comfortably in a variety of conditions. 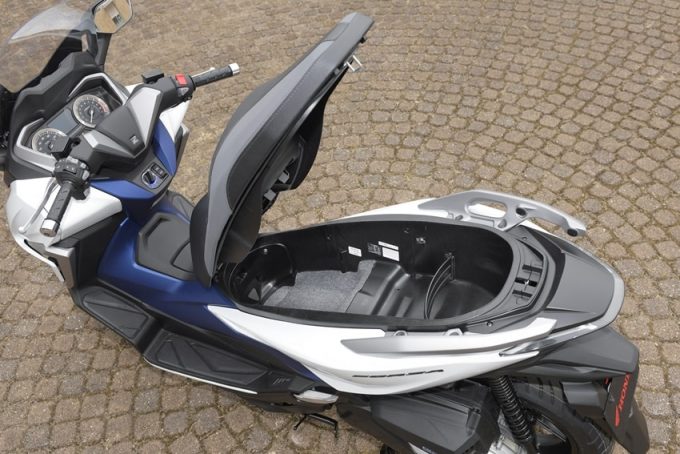 The space under the seat is significantly larger than that of the 150 class and can accommodate an A4-size business bag.