When tinkering with carburetors for overhaul or setting up, the most important adjustment for both single and multiple carburetors is the air screw and pilot screw. Both have a fixed reference value for the rpm to be returned from the closed condition, but ultimately fine adjustments are made according to the engine condition. At that time, having tools called angle screwdrivers and pilot screwdrivers will facilitate delicate adjustments. 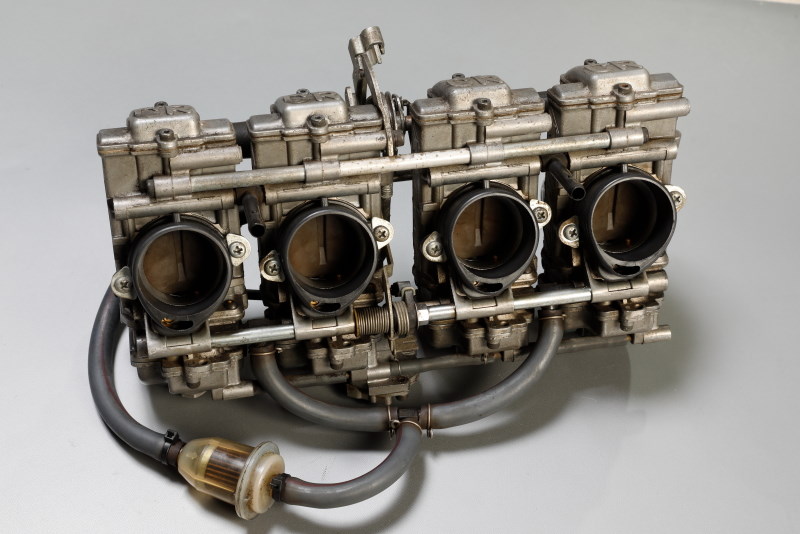 The Keihin FCR carburetor is a typical racing carburetor. Depending on the model to be installed, the Horizontal or Downdraft body style, bore diameter, and carburetor pitch must be selected, while the jet and needle combination is set by the owner according to the engine tuning details and exhaust system specifications. The pilot screw's return speed is an important clue in determining the size of the slow jet. 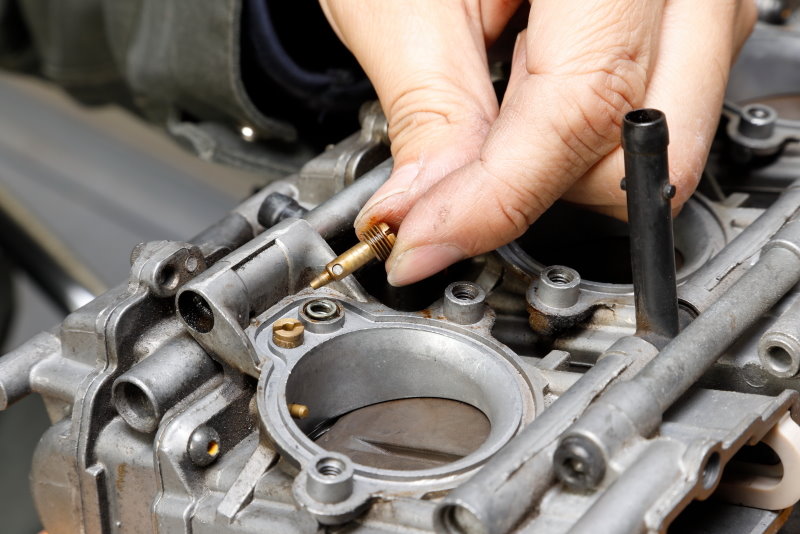 With an OEM carburetor for a production car, either an air screw or a pilot screw is installed for the slow system adjustment function, but with an FCR carb, the slow air jet can be replaced with a screw, allowing adjustment with both an air screw and a pilot screw. At first glance, this may seem convenient, but if the idling is adjusted in such a way that one is too open and the other is too tight, the throttle will be either too thick and cover too much or too thin and there will be no sense of power when the throttle is opened. 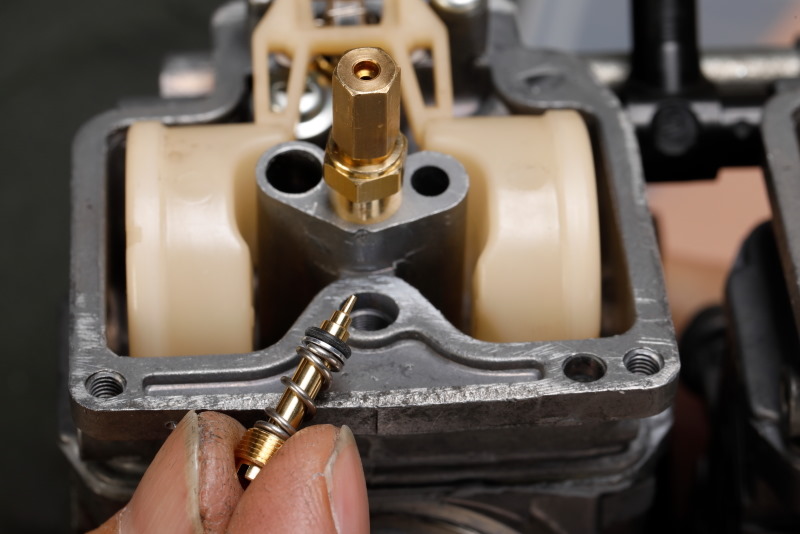 The pilot screw is located on the underside of the carburetor and is difficult to turn with the float installed and assembled to the engine. For FCR carbs, the air screw should be turned back one turn and the pilot screw should be turned back 1 1/2 turns to select a slow jet that is not covered and not too thin so that the rotation connects smoothly when the throttle is opened.

Both of these screws have a significant effect on the ease of handling from the idle state to the beginning of throttle opening, and at the same time, they can also be used to determine whether the slow system settings are good or bad.
In the case of the pilot screw, there is a slight range depending on the model, but in most cases, it is said to be normal for idling to be stable and in good condition between 1-1/2 and 2 revolutions back from the deadline.

Regardless of the size of the slow jet, if the pilot screw can be used to increase or decrease the amount of air mixture sucked out to balance the books, it may seem that there is no problem. However, the number of revolutions the pilot screw is turned back is a barometer of the slow jet setting, so if the motorcycle is not idling until the pilot screw is turned back 3 revolutions, less gasoline is sucked out of the slow port when the throttle is opened, and the power feeling at low speeds is spoiled. The throttle is not idling. Conversely, if idling is stabilized by throttling down to 1/2 rpm, excess gasoline is sucked out when the throttle is opened, increasing the likelihood of fogging symptoms at low speeds.

Even if the slow jet setting is off, if it is only in the idling range, it may be possible to adjust the pilot screw return rpm to balance the setting. However, if it is out of a certain range, problems may occur as soon as the throttle is opened, so it is important to select a slow jet with a return speed between 1 1/2 and 2 rpm.

The key to pilot screw adjustment is to find the best return rpm by fine-tuning the engine with the carburetor installed, but the difficulty of the adjustment varies considerably depending on the model. The reason for this is the position of the pilot screw. The pilot screw is located in the middle of the pilot outlet where the mixture of gasoline metered by the slow air jet and air metered by the slow air jet is sucked out. (Some carburetors have a screw on the top cover side.)

It is not difficult to turn the pilot screw when the carburetor is alone, but when it is attached to the engine, the cylinder and crankcase are so close together that the screwdriver cannot reach them. However, it is important to know the exact amount of adjustment (i.e., the number of revolutions to be returned).

Point 2 - The pilot screw, which is often attached directly below the carburetor, is difficult to turn with an ordinary screwdriver when the carburetor is installed in the engine. 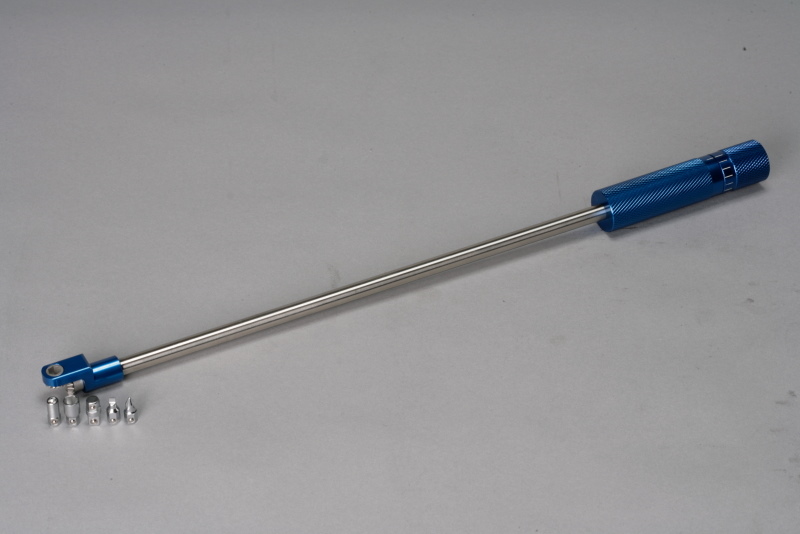 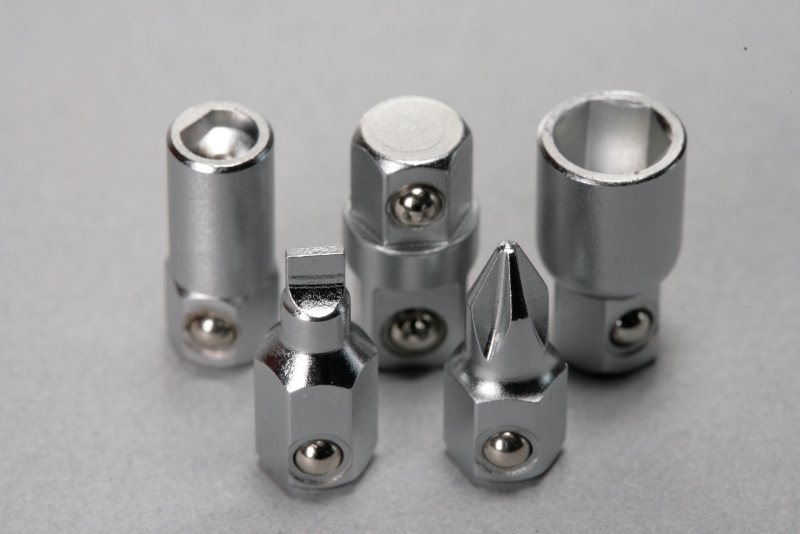 The replaceable bit at the end is hexagonal with a 1/4" opposite side and is compatible with so-called commercial hexagonal bits. The screwdriver includes five different types of bits, but a general-purpose bit can be used if the negative groove, which is common on pilot screws, does not match the included bit. 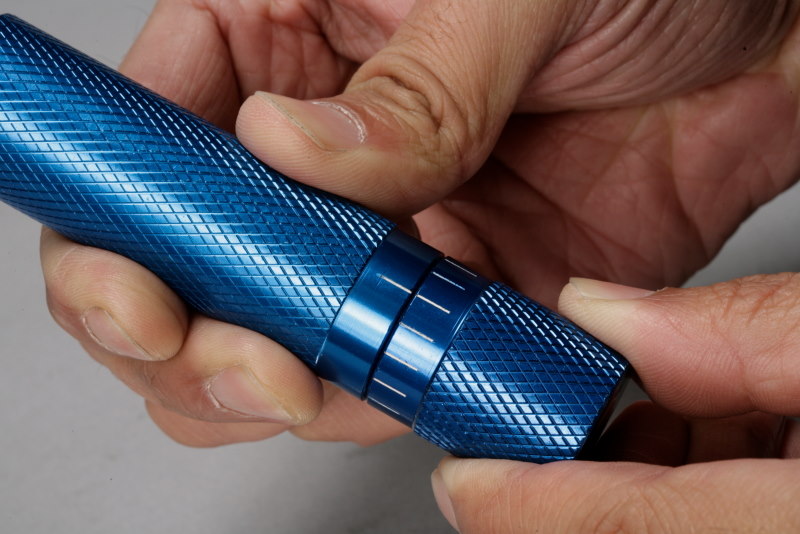 The handle portion of the grip and grip end has a knurled line that visually indicates the angle at which the handle is turned. As the screwdriver bit also goes around when the handle is turned once, delicate adjustments such as 1/4 turn and 1/8 turn can be made at hand without looking at the bit. 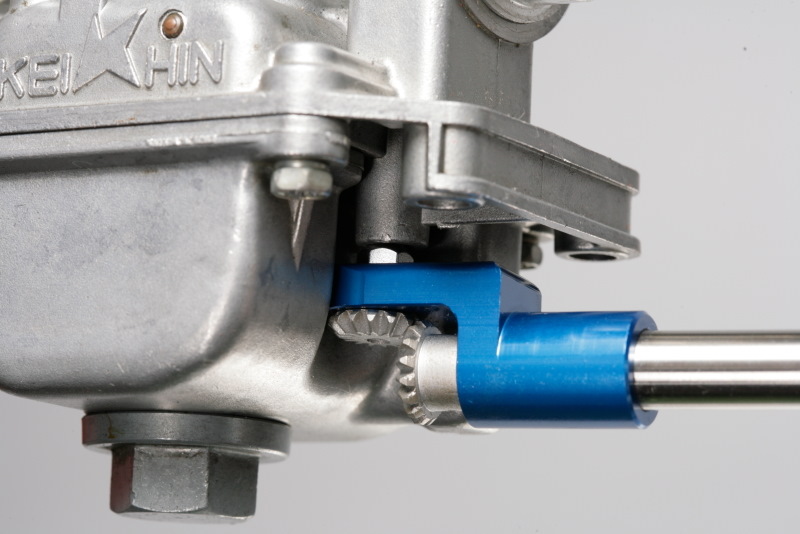 Although we cannot guarantee that there will be absolutely no interference with the insulator or crankcase, it is possible to turn the pilot screw in places so tight that even a stubby screwdriver would interfere with it. In the case of 4-cylinder engines, there may be a slight difference in intake capacity between cylinders, in which case there will be a slight difference in the number of pilot screw turns back. As long as the pilot screw return is not too far from the basic 1-1/2 turns, there is no problem even if the return speed differs from carburetor to carburetor .

This screwdriver can be used to adjust the pilot screw of a 4-carburetor without removing it from the engine, even if the clearance between it and the crankcase is too narrow to turn it with a regular or stubby-type screwdriver. When adjusting the pilot screw, turn the screw with the throttle at idle. If the engine speed rises after 2 or more revolutions of throttle return, the current slow jet may be too thin. If the engine idles strongly when the engine is tightened more than one revolution back, the slow jet may be too thick.

With an OEM carburetor, there should be no major deviation from the standard setting unless major changes are made to the engine or exhaust system specifications. However, when a racing carburetor or an OEM carburetor of another model is used, there is no base set, so the initial set must be made with a certain degree of accuracy.

We have explained several times that carburetor setting is done in the order of slow jet, jet needle, and main jet, but when determining the slow jet, it is necessary to pay attention to the pilot screw return rpm, and for this reason, it is important to know the adjusted rpm with the engine installed and started.

The superiority of the angle screwdriver for cab adjustment is that it allows the operator to grasp the rotational state of the bit tip, which is not visible during operation, by utilizing the memory on the grip and shaft. Fine adjustments, such as first turning back 1 1/2 turns, then tightening 1/4 turn, then turning back 1/2 turn, can be grasped without having to look at the pilot screw or bit tip.

The product introduced here is from Motion Pro, Inc. The bevel gears of the shaft and bit holder are completely exposed, and while there is a concern about foreign objects and the like biting into the shaft, the gear case and other parts have been omitted to make the product as compact as possible. The bit insertion part is hexagonal with a 1/4-inch diagonal, and it is possible to attach a regular replacement type bit, so a general-purpose minus bit can be used if the minus bit supplied with the driver does not fit well. While some screwdrivers can only be combined with the included bits, depending on the product, the versatility of being able to use existing bits is appealing!

The angle screwdriver, which can convert the direction of rotation by 90 degrees, is an indispensable item for pilot screw adjustment. However, depending on the engine and carburetor combination, it may not always work on all motorcycles. However, it is difficult to use a stubby screwdriver to adjust the pilot screw, which is located in a tight spot behind the carburetor, while counting the number of revolutions to return it.

This angle screwdriver also comes with a 6.3 sq. socket bit, which can be used as a socket driver for bolts and nuts in places where a ratchet handle cannot reach. If you are a Sunday mechanic who enjoys tinkering with various motorcycles, it is a good idea to have such a screwdriver for carburetor maintenance.

Point 2 - Even if you cannot see the screw part, you can grasp the number of revolutions by the scale on the grip part.

The Result of a Terrible Experience with a Lever that is Rumored to Never Break.
EWC TITLE-DECIDING 100TH-ANNIVERSARY BOL D’OR ATTRACTS 82,000 FANS