Home
Webike Original
How to
Using an Exclusive Tool to Safely Remove Stud Bolts that Interfere When Engine Overhauling!

The stud bolts attached to the cylinder head and crankcase serve as guides during assembly, but may get in the way during disassembly and overhaul. In such cases, a special tool called a stud bolt puller can be used to pull out the bolts more safely and securely than double nuts or locking pliers.

Stud bolt can break off in the midst of removal if missed. 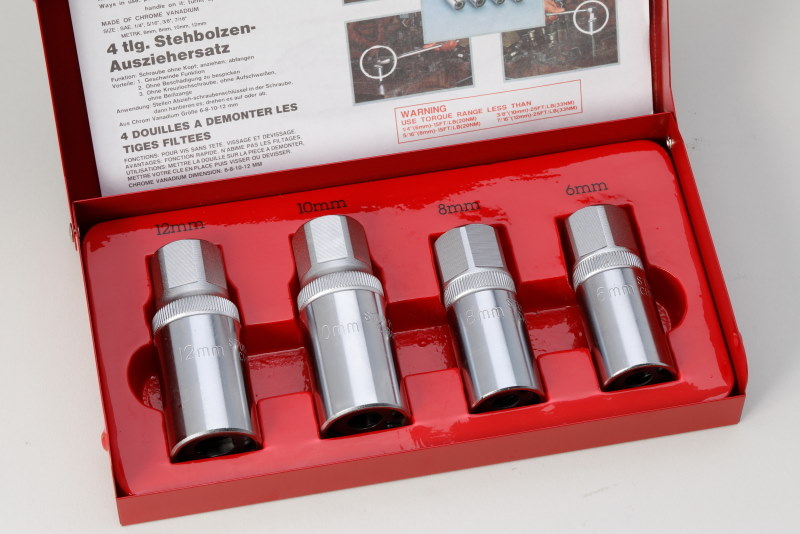 Stud bolt puller set for M6, M8, M10, and M12 sizes. A roller is built into the body like a deep socket, which can be turned counterclockwise to bite into the bolt and loosen it. Since the roller has a limited range of movement when tightening, if a puller for M8 is set on an M6-size stud bolt, it will spin around. So it is important to own a set of tools that can cover a certain width. 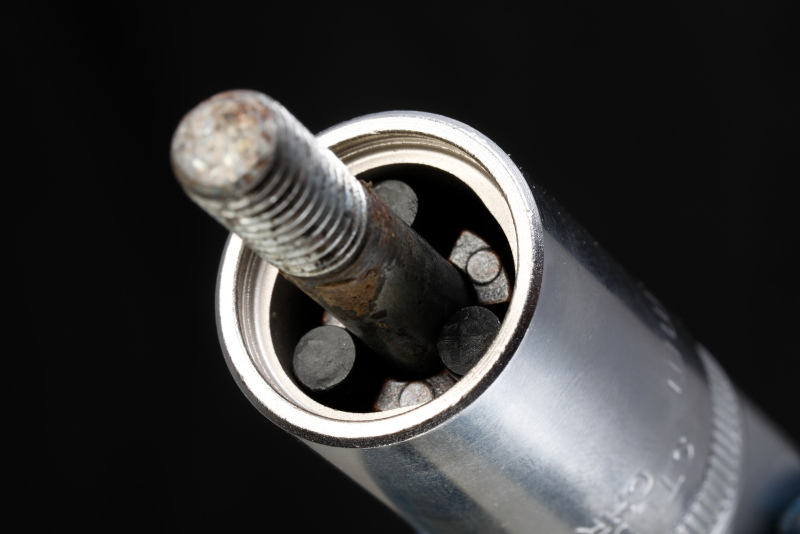 Stud bolts are one of the parts that increase the efficiency of assembly work. Stud bolts are assembled in various parts of the engine, including the flanges of the exhaust system and intake manifolds. When screwing bolts into an aluminum crankcase or cylinder head, one must work carefully to avoid damaging the soft aluminum, but if the steel stud bolts are screwed in first, it is easy to tighten the nuts. A stud bolt makes temporary installation easier because it can hook onto the flange.

On the other hand, another characteristic of stud bolts is that they are highly susceptible to trouble and damage. One of the most common problems with the discontinued models is the breakage of exhaust manifold stud bolts, which is common with Kawasaki Z1 series engines. When installing an external assembly exhaust system, the thin M6 bolts can break from the threads when tightened under stress, and depending on the location of the bolt, it may be necessary to remove the cylinder head.

Even if the bolt itself does not break, the stud bolt can become an obstacle during engine overhaul or internal combustion machine work. A typical example is the cylinder stud bolt threaded into the crankcase. The work is easier without stud bolts when grinding the surface with a milling machine or simply removing the gasket and smoothing the surface with an oil stone.

If the bolt is thin, it can be removed by using a double nut method, in which two nuts are placed on top of the protruding thread to loosen the bolt, since the tightening torque for setting an M6 or M8 size stud bolt on an aluminum part is around 10 Nm. However, if a thread lock is used to prevent the bolt from coming loose, or if the bolt has become stuck due to aging, the double nut will often slip and not loosen.

When overhaul work gains momentum, it is easy to overreach to loosen the bolts somehow using only the tools at hand, but there is a risk of damaging the bolts if you rely too much on double nuts, locking pliers, and the like. The goal is to get the work going, but if you break the bolt, it is a waste of time. 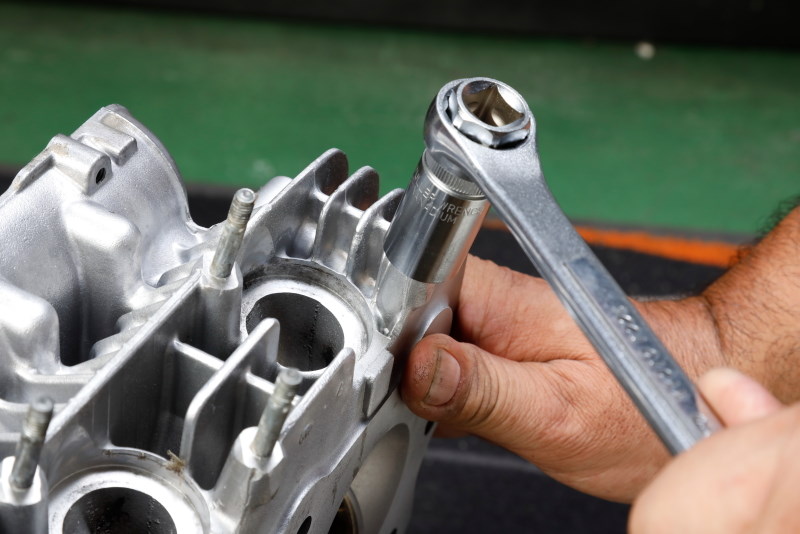 By completely covering the exhaust stud bolt, it can hold the unthreaded shaft portion close to the cylinder head. If a double nut is hung on the end of a thin stud bolt, a puller that can turn the base of the bolt is effective, since only the threaded part of the bolt may break off if the bolt has deteriorated over time. 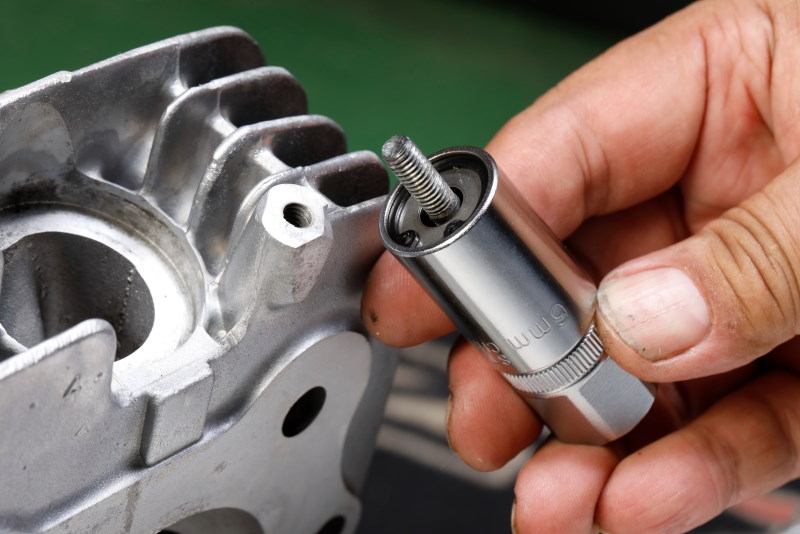 By tightening the base of the stud bolt with three rollers, the bolt was successfully removed without breaking. Even if you are a Sunday mechanic who does not have enough money to buy a set of pullers, it is worthwhile to have one for M6 size stud bolts, which are often used in intake manifolds and exhaust manifolds. 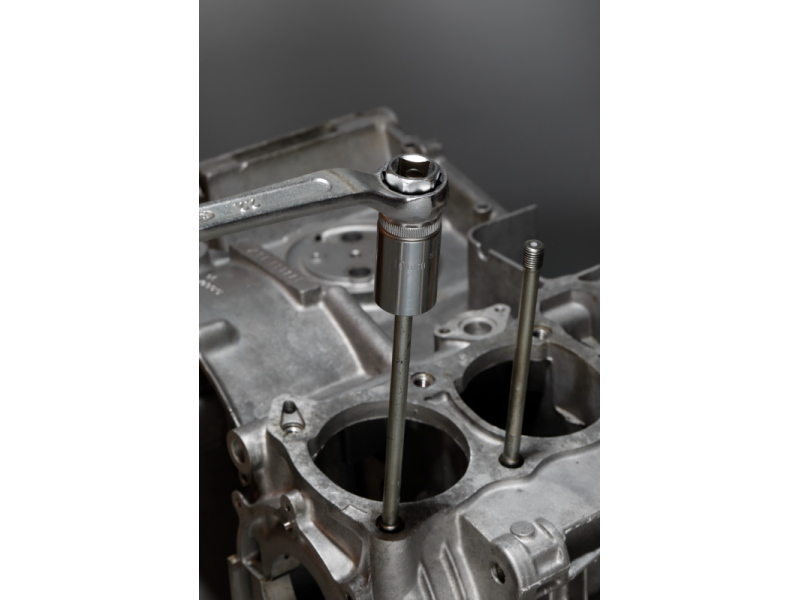 Cylinder stud bolts with long shaft sections often twist in the midsection and lose torque when a tool is applied to the threaded portion on the head side to loosen it. 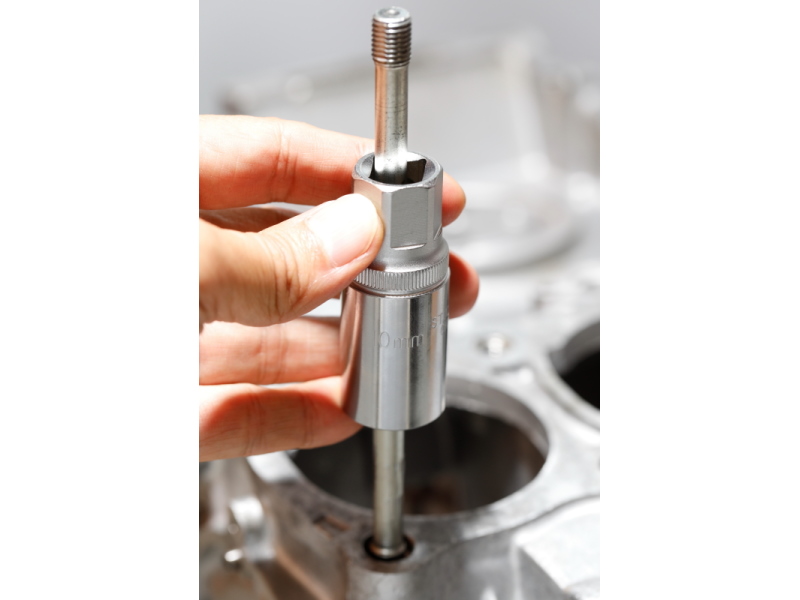 Even in such cases, a roller-type stud bolt puller may be able to turn the bolt at the unthreaded middle section. Depending on the diameter difference between the threaded part and the shaft part, the roller may not be able to catch the bolt, so it is necessary to check before work.

Tools called stud bolt pullers and stud bolt removers are items used to safely remove delicate stud bolts. The mechanism for loosening stud bolts can be roughly classified into two types: the double nut method, in which the bolt is screwed onto the male threads of the bolt to provide friction, and the roller method, in which a roller is pressed against the shaft of the bolt.

The double nut type tends to make the tool itself more compact than the roller type, but the roller type seems to be more advantageous for bolts that are thread-locked.

When the puller, which is shaped like a deep socket with multiple rollers (mainly three) inside, is placed on a stud bolt and turned counterclockwise, the rollers, which roll along a slope inside the socket, bite into the bolt. The more force is applied in the loosening direction, the more strongly the rollers bite into the bolt, and thus the stud puller begins to loosen the stud bolt.

In the double nut method, the force to loosen a stud bolt is concentrated on a few threads where the bolt hangs, because the force to loosen the bolt is exerted by pulling on the threads. In contrast, the roller method can gain contact surface area by the length of the roller and the number of rollers, so the loosening torque can be efficiently transmitted to the stud bolt.

Unlike the double nut method, the roller inside the socket has the advantage of being able to hold even unthreaded parts. Attaching a double nut to the cylinder head side of a stud bolt on a cylinder that has no thread in the middle part to loosen it may only twist the entire bolt and not transmit torque to the thread on the crankcase side.

In such situations, a roller-type puller may be able to penetrate a long shaft and hold a stud bolt. In the case of a stud bolt with a large difference in diameter between the thread and the shaft, the roller may not be able to hold the shaft and may swing out, so it is necessary to check the range of compatibility between the stud bolt and the puller in advance. However, if the puller can hold a long bolt near its base, it can reduce the loss of torque and thus make the work more advantageous.

However, if the roller is pressed hard against the threads of the stud bolt, the threads may be damaged and the nut may not fit properly, so the stud bolt removed with the puller should not be reused but replaced with a new one.

Stud bolts are rarely removed for routine maintenance, but if they are not loosened reliably when the need arises, they can be troublesome later. If you feel that you cannot compete with double nuts and locking pliers alone, prepare special tools such as a stud bolt puller or remover before starting work.