The middle-class model was added to the new-generation CB series, which includes the CB1000R, CB250R, and CB125R. The CB650F outfit was also newly introduced as CB650R. It is reported by a freelance writer, Yatagai Hiroaki.

The iron frame is inherited even if it is reborn from F to R.

CB650F, a new generation CB series, is reborn as a CBR650R, with the "F concept" from touring to city riding and racing! When I heard this news, I felt a bit complicated. It was because I liked the steel frame that was used in the "F". The CB650F has chosen an iron frame in the modern era when aluminum twin-spar frames are popular of high rigidity starting from Super Sports. Even without applying extreme frame stress, it is possible to ride comfortably in the range of speed of the general public road to bend smoothly which is the benefit of the iron frame.

What will happen to this iron frame with the renewal? It was the concern. I was excited to hear that the pivot plate part will be renewed and the steel of the material will be left as it is. Recently, Honda has put a great deal of effort into the stress analysis of the frame. The most important reason for this is that computer analysis technology has progressed, and it has become possible to perform complex calculations that have not been possible before. And, in order to make the machine stick on the road surface, it makes the frame "moderately well" in the corner, but it is said that the technology to make up this "moderately well" has advanced tremendously. 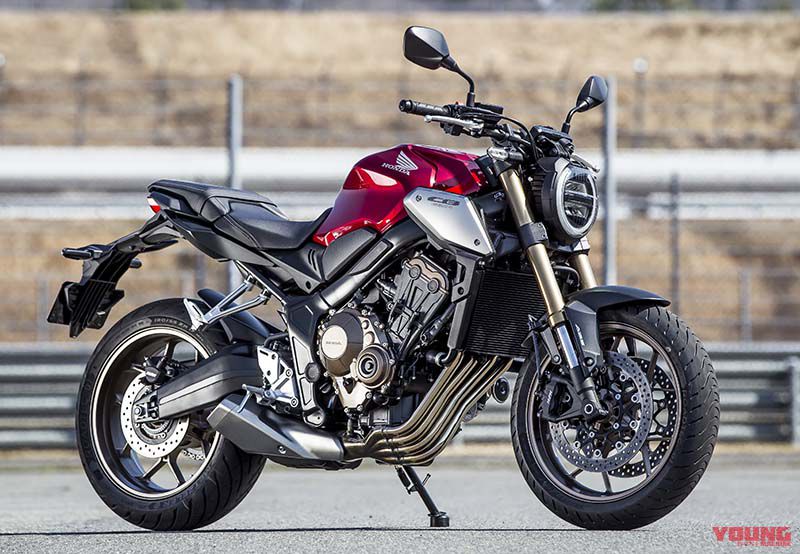 [HONDA CB650R 2019 Type Japan Specification Price: 961,200 yen] The new 650 Naked has been redesigned with the engine and frame of the conventional model CB650F and undercarriage, and has been considered a modern cafe racer image. 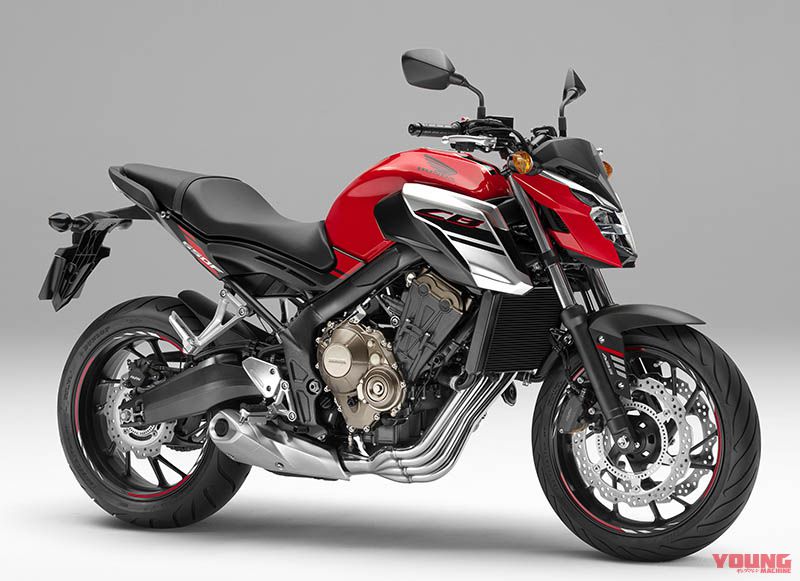 It bothers the rigid optimization than the lighter weight of the frame!

The frame mounted on the new CB650R was originally developed with the latest analysis technology in addition to the comfortable characteristics. Specifically, the pivot plate, which was iron (forged), was used as the press material, and the weight reduction and the rigidity balance were optimized. 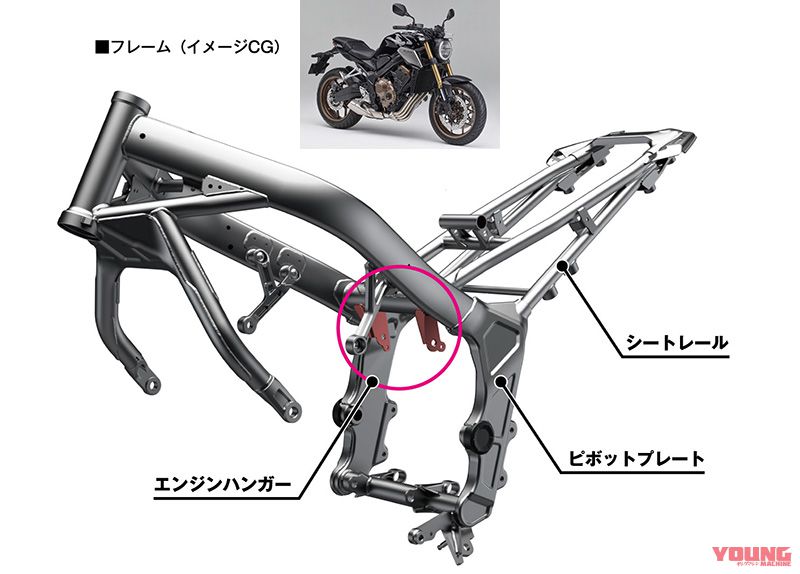 The frame of CB650R. The pivot plate is changed from a conventional forged plate to a box structure that combines press-molded products. By using a thinner steel plate and using a Monaca pattern, it is possible to achieve both lighter weight and higher rigidity at higher dimensions. The engine hanger located on the rear side of the engine is integrated into the cross pipe. 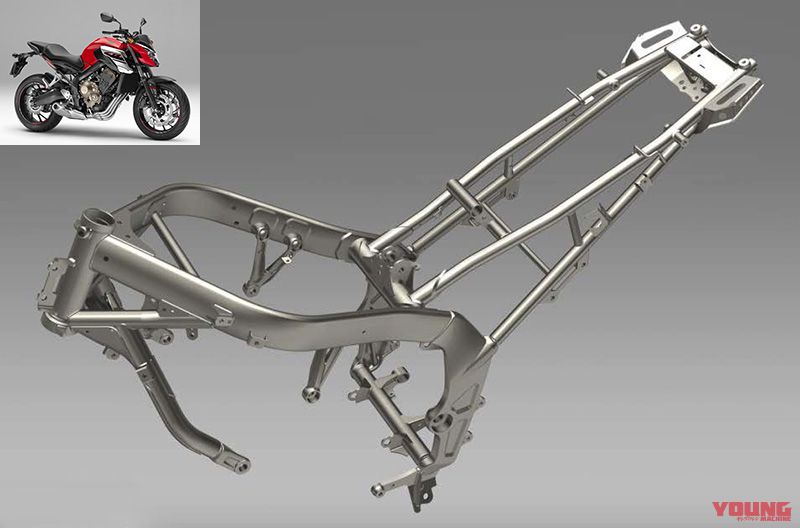 The frame of CB650F. A twin-tube type of steel with an elliptic cross-section is adopted to ensure that it is lightweight but also rigid enough for sports riding. It responds flexibly to the road surface that changes depending on the characteristics and makes it easy to convey the road surface condition to the rider. The pivot plate is adopted forging to eliminate the need for peripheral covers. 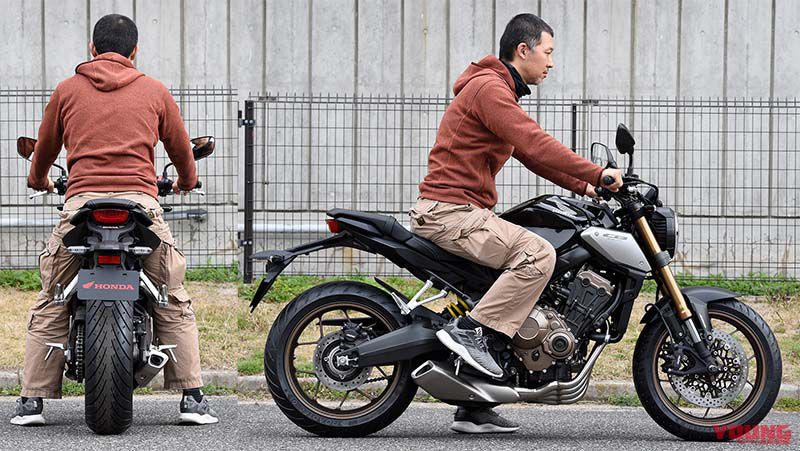 Riding position and foot grounding of CB650R by the 183cm rider's height. Although it is not much different from CB1000R, it is the impression that the width of the tank portion has become slim. It is somewhat tilted forward for the naked. 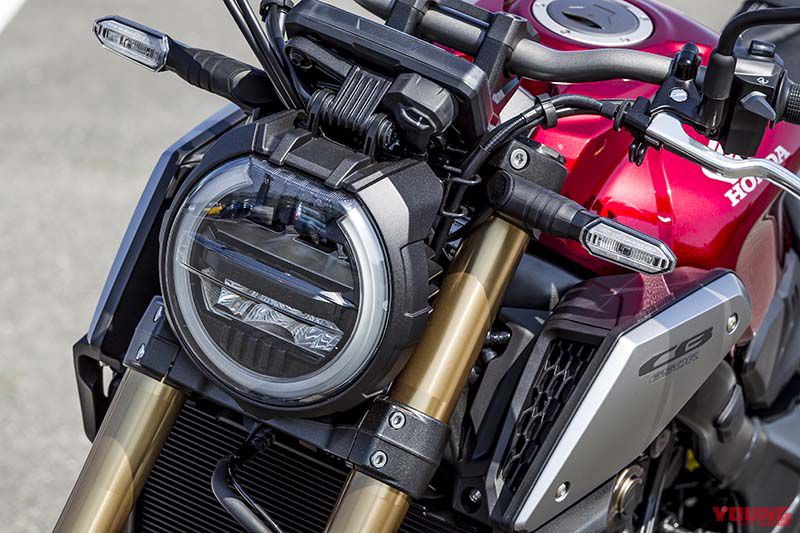 A thin round headlight common parts with the CB1000R. Of course the light source is LED with ring light. It was necessary to move the key cylinder to the vehicle body side for this feeling of condensation. 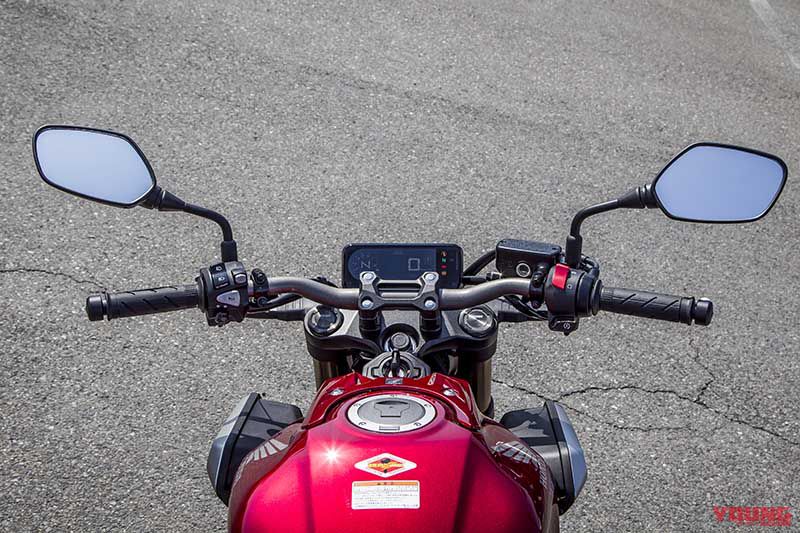 Although there is no change in the caster and trail compared with CB650F, the handle position was lowered slightly forward, and the step position was moved slightly backward and upward. It got a more sporty position. 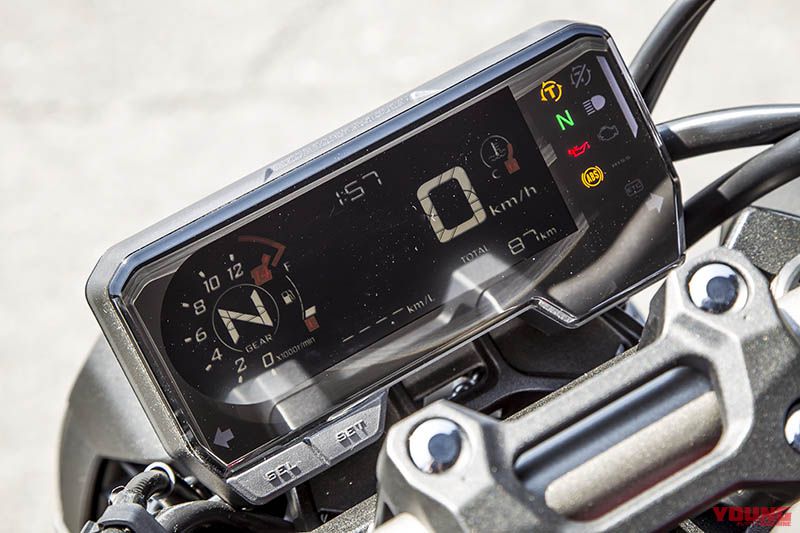 The meter panel in the new generation CB series is not in a built-in type, and the liquid crystal surface can be enlarged by covering the acrylic to the edge. It also displays gear position and traction control settings. 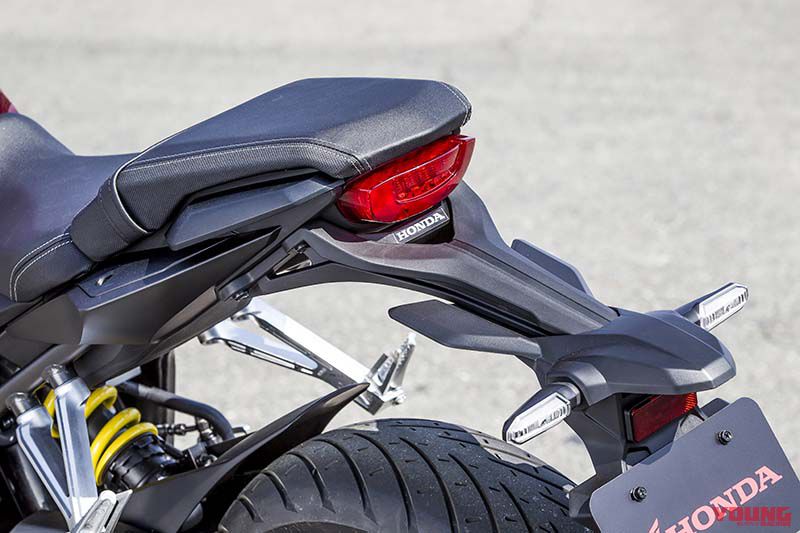 The seat rail has been changed from the mounting part in order to create a trapezoidal silhouette that looks like a new generation CB series with a short rear end of the seat. It was achieved a weight reduction of about 3kg in combination with the main frame. 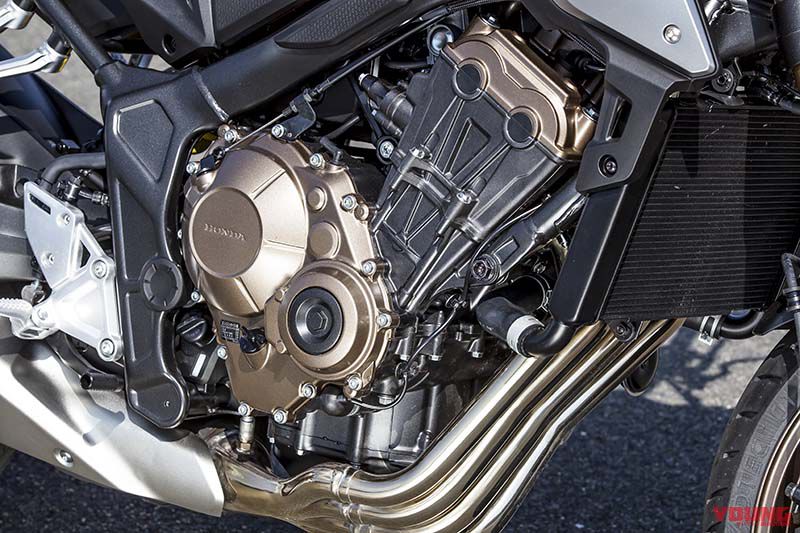 A modified engine similar to the CBR650R, but, the four exhaust pipes of CB650R are beautiful. By the way, the intake system is different and the ram air structure is not adopted. 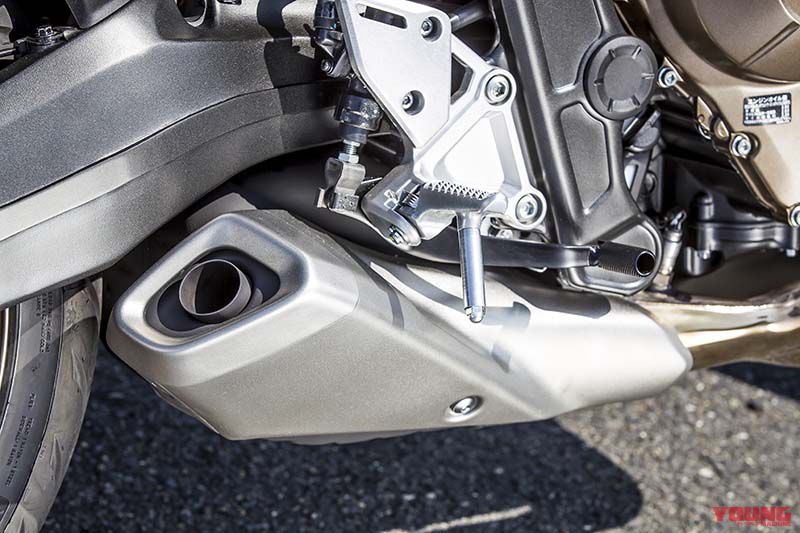 The tail pipe diameter was expanded to 38mm, and the exhaust efficiency was improved to pursue power improvement. In addition, you can enjoy the emotional sound by adjusting the exhaust angle upward. 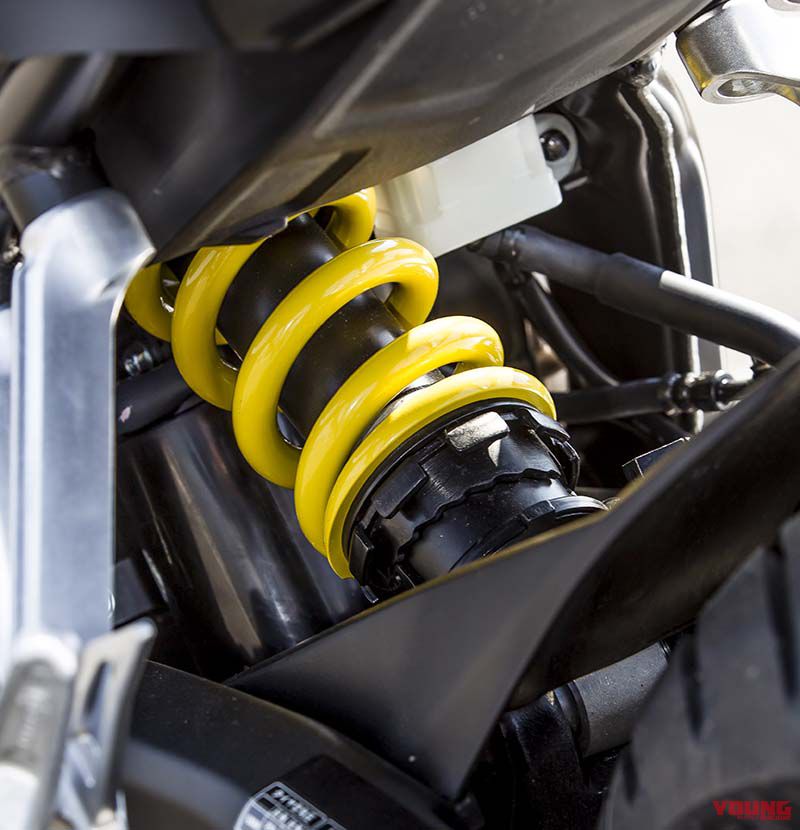 A pillow ball has been newly adopted at the connection between the rear shock and the swing arm. In other words, I can read that it was adopted a flexible frame. 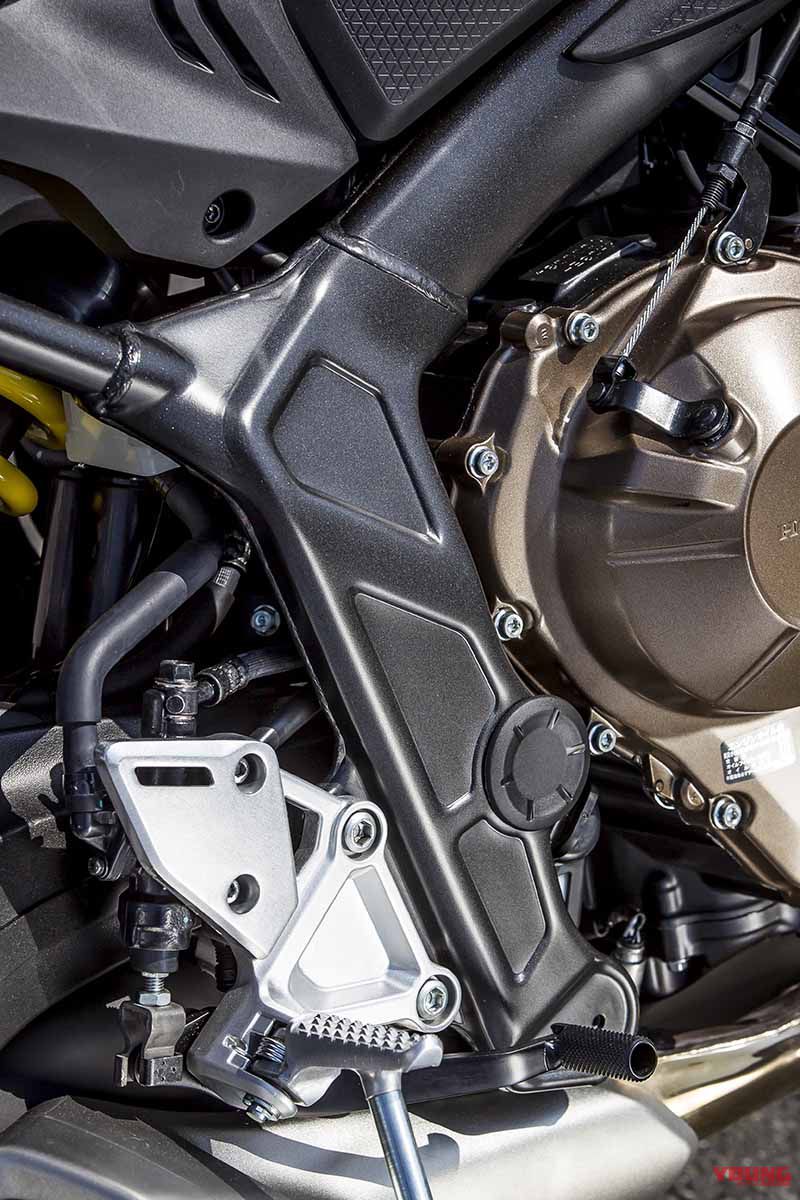 Honda's analysis technology that has undergone dramatic evolution in recent years is "necessary to pursue the flexibility of the frame". A hollow structure is adopted for the steel pod of the twin spar frame made of steel, and the rigidity balance is actively controlled.

* This article is restructured based on the article published inYoung Machine 2019 May issue. 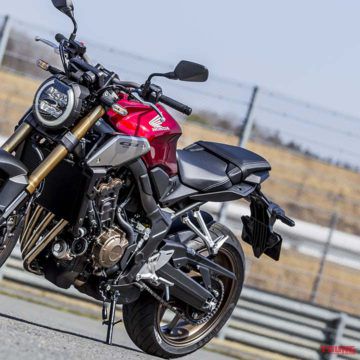 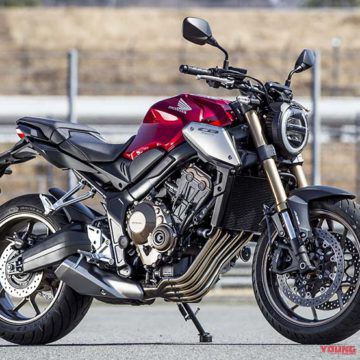 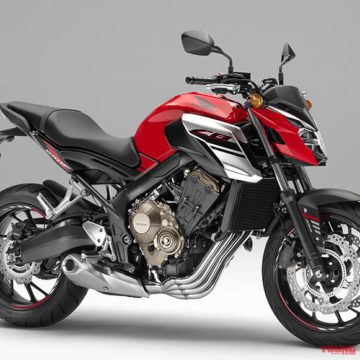 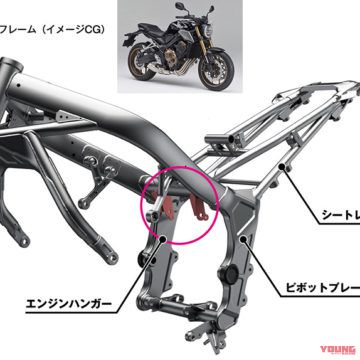 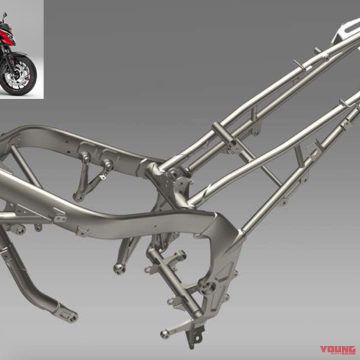 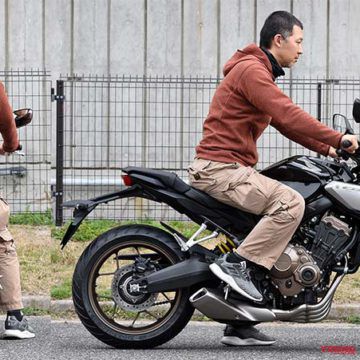 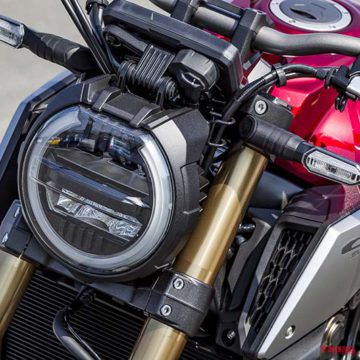 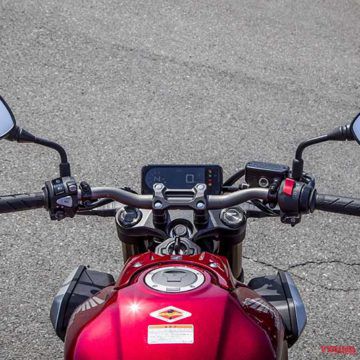 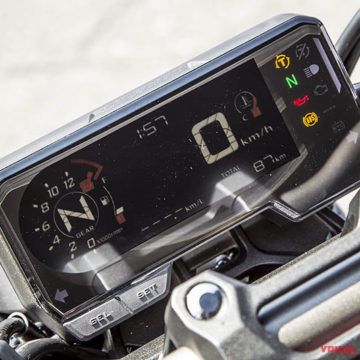 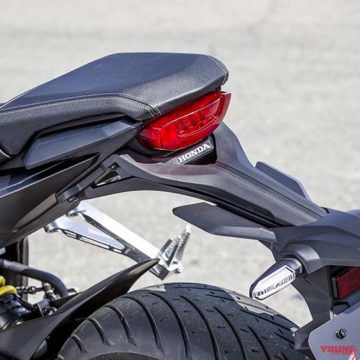 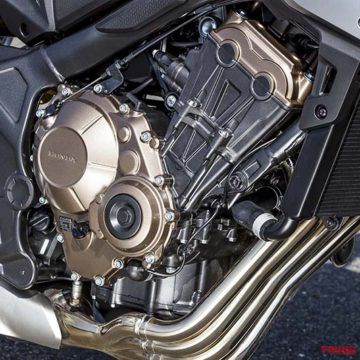 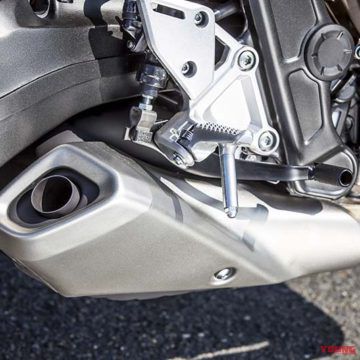 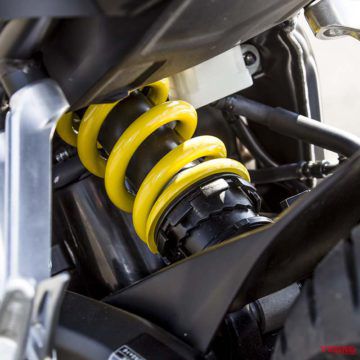 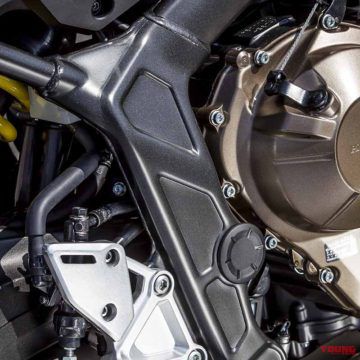