The fireball-colored Zephyr 750 Custom. The 17-inch front and rear suspension has been modified to give the impression of a compact 750cc machine with a sporty look, but a closer look reveals a slight difference in the intake system. Surprisingly, this bike is fuel-injected (FI). Not only this but also many other carburetor models have been modified to FI models in order to improve driveability and efficiency, or by a willingness to incorporate a new fuel supply into an orthodox model. While both objectives were present in this bike, the owner's goal was a bit unexpected. It was to reduce the noise of the FCR carburetor, including the noise of the exhaust system, which had been very loud. However, there was no specific or exclusive kit for FI conversion, so they had to collect parts this way and that, and built this bike step by step. The throttle body and injector were brought from the current FI models. The adapter to mount them on the engine was a Bagus! original one-off. Fuel never flows by itself, so a fuel pump was necessary, as well as various sensors for detection and an ECU for calculation to determine the proper amount of fuel to spray into the throttle body. Not only the hardware, but also the settings to optimize fuel quantity and ignition are essential. After doing all those things one after another, it was completed as shown here. The actual exhaust sound is quite, and there are certainly no other sounds like those from the carburetor. The sound is such that it might be quieter than a modern middle class motorcycle. Furthermore, the Bagus! ZEPHYR750 could be ridden at full throttle with ease from around 1500 rpm without fear of stalling. In the front area, a Noblest "E x M" Ohlins inverted package with a SCLUPTURE steering stem kit is used. The brake master is a Brembo RCS, and the clutch holder is a KOHKEN. A knock sensor monitor was added to the left of the meter's indicator light for the FI setting. The fireball-colored fuel tank and side covers are both stock and have been since the beginning. They are so clean that it does not feel like more than a decade has passed. The seat is an item recommended by Bugus! and is shaped for easy riding while using the popular Alcantara skin. The tail cowl is made by Power Builder. The MoTec M84 ECU that controls the FI system, as well as the ETC on-board equipment, are installed under the tail cowl to the seat after the fender removed. Signals from each sensor are calculated for 3D control of ignition and fuel quantity. The photo shows the cam position sensor. Other sensors, such as oil temperature, atmospheric pressure, intake air pressure, and a crank sensor, are added. The engine remains stock as 738cc displacement. but has been overhauled and ported, and there are plans to increase the displacement to 850cc. The engine is equipped with parts such as a Wheelie pulsar cover, a STRIKER guard slider, and other parts that enhance the quality and functionality of the engine as if it were a custom-built engine. A fuel pump is placed under the throttle body.

The intake system is converted from FCRΦ35mm to FI. The throttle body is a Φ38mm Z1000, and an adapter optimized for the internal passage without steps was fabricated and set by Bagus!. The Φ38mm bore was designed to be like a Φ34mm bore, even with the Φ38mm bore, the throttle is able to run at full throttle from 1500 rpm without stalling. The steps are STRIKER Special Rearsets Kit in black, which is a 25mm back x 25mm up one-position setup. The front brake is Brembo .484 calipers with Sunstar premium racing brake discs, and the front fender is carbon fiber items included in the ExM package. Wheelie handcrafts the swingarm from 7N01 aluminum with a triple square cross section, and RX coat (black) specification. Rear shocks are Ohlins. The wheels are forged aluminum Marchesini M10S in 3.50-17 and 5.50-17 sizes. Many of the bolts have been replaced with 64 titanium bolts.

Bagus! means "Best" in Indonesian language. True to the word, their concept is that they provide all the customers "BEST" life with motorcycle. They offer various services from customization, fixing to inspection. Please come and visit them if you like motorcycle. 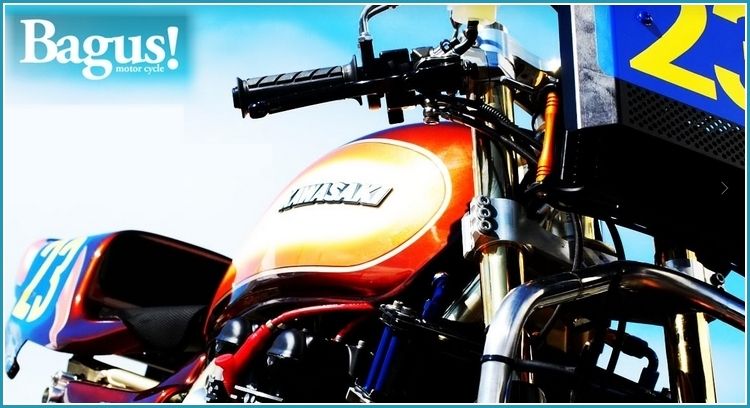